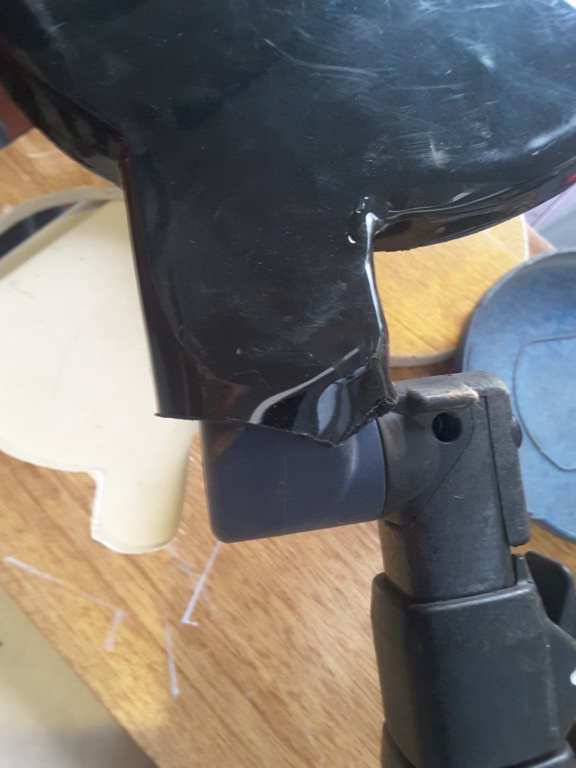 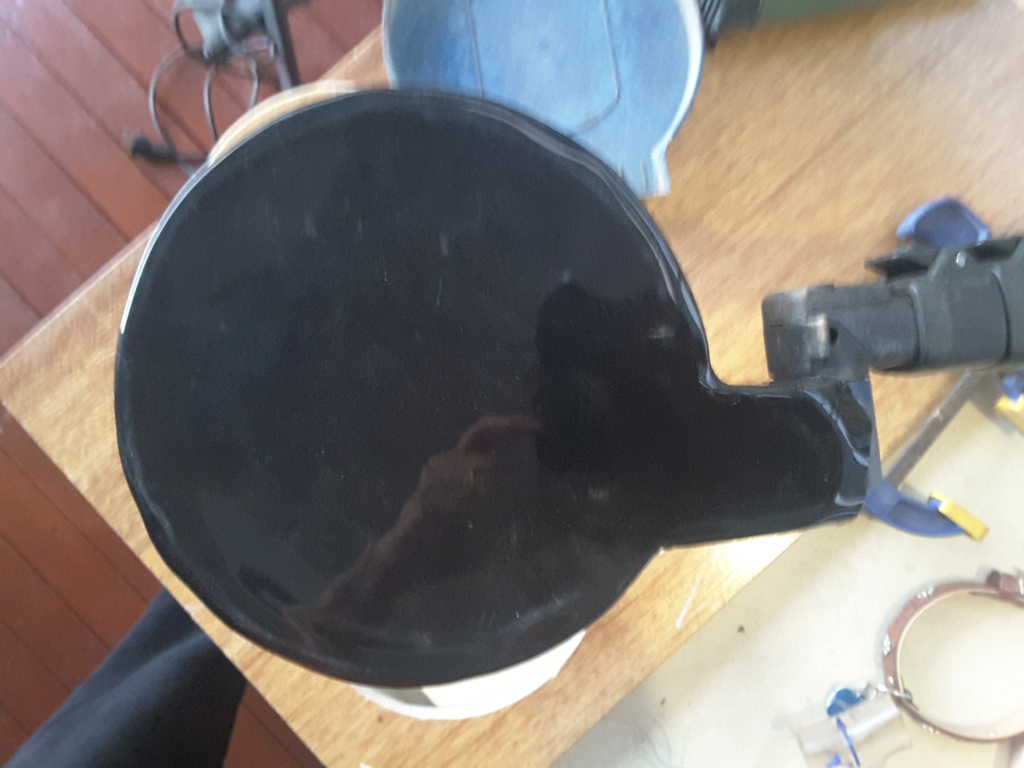 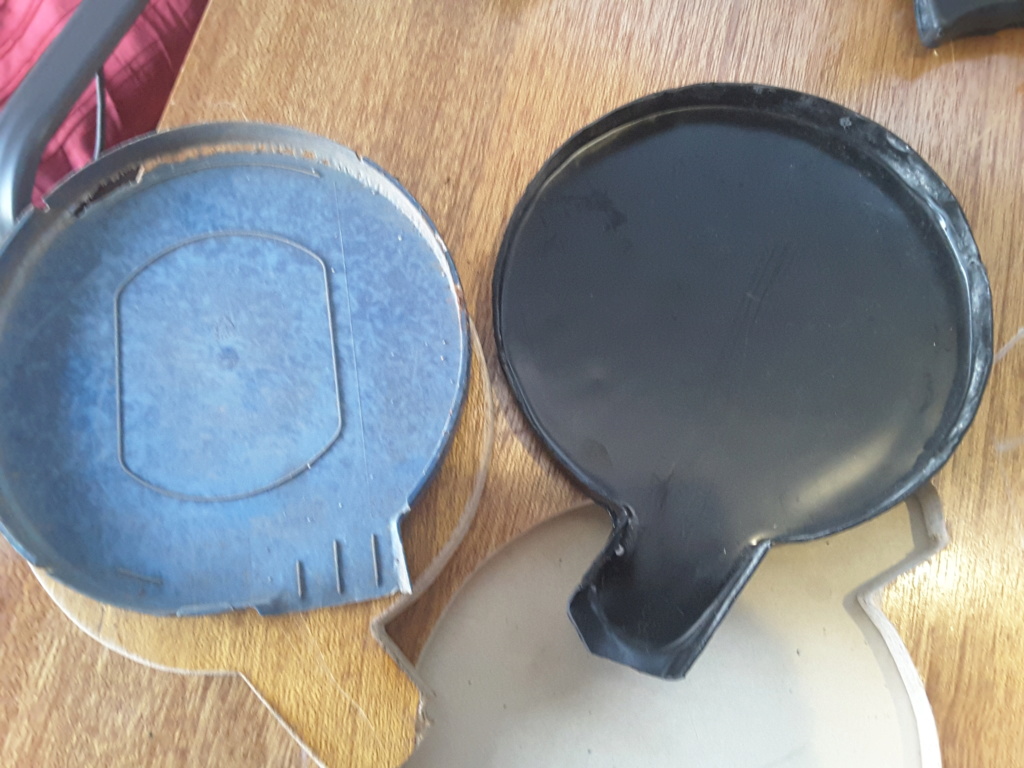 Hi, thought I might try and make some skid plates for the SDC2300, after reading about mike and jens good attempts with altering other minelab skid plates.
I got plastic from menzel plastics. It is called HIPS 1.5mm thick sheet.
I explained what i was trying to do and he had a detector and knew what I was talking about.
My first attempt failed as put plastic in oven and would get soft but cooled before could do anything. Ended up blistering plastic as got it to hot.
This is pictures of second attempt.
I drew around the coil carefully so had right size to cut from scrap chip board. Then used a jigsaw to carefully cut out and then recut outer mould so the gap between peices so had just over 1.5mm gap. But after having trouble then gave outer bit a miss.
I cut plastic sheet with jigsaw 25mm larger than mould and clamped sheet to mould.
Then used heat gun to heat plastic so it started to move.
I used another piece of timber to push plastic up side of mould and slide back and forth along edge until it cooled and held shape while keeping plastic and mould on flat surface (excess timber sheet)
I kept working around the mould and the end result is good for us.
I even got the mould correct as when pushedonto coil fits very tight and is fairly difficult to get off.
With the leg where knuckle goes. I made sure I left excess there to protect knuckle as per picture.
My next on, I will leave extra yet as need to cover more of knuckle rto protect more.
Just finished moulding this on, needs a bit of tidy up but very happy. Will see jow it lasts in the field,  gotta be better than origonal ones.
It may not fold like that, but we never fold up anyway. We have made setup in car there the detectors all fit in custom made draw system.
Just thought I would share. 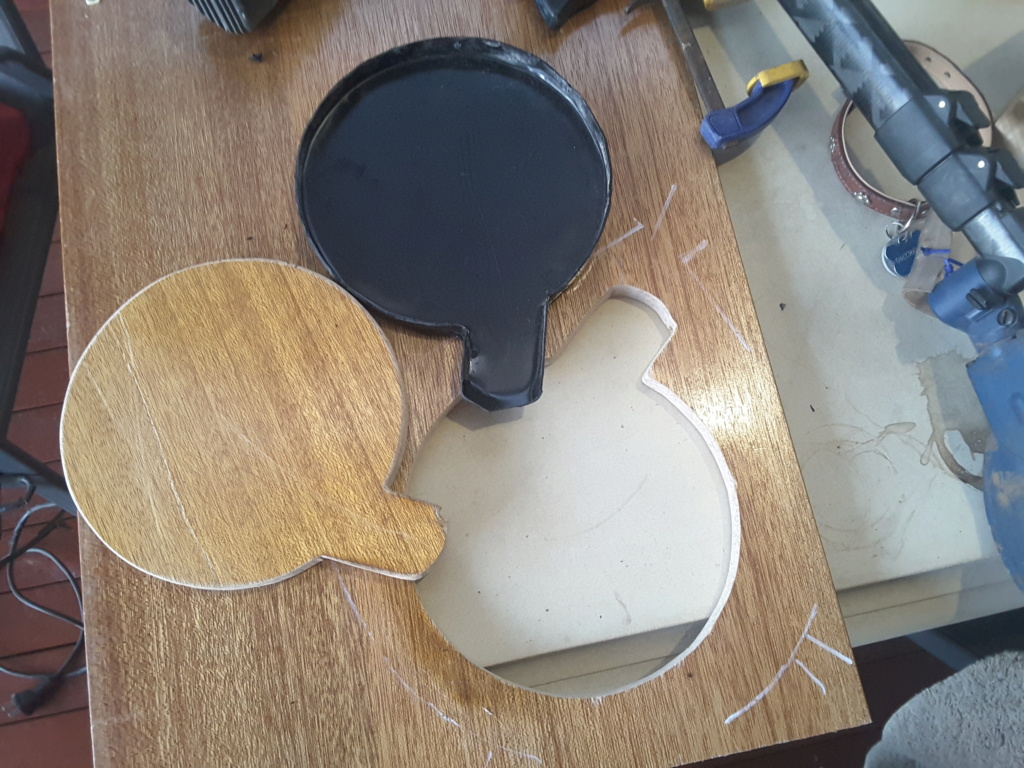 Hey Wally great job, now just to make it a bit easier and quicker now that you have the wooden mold of the skid plate shape, knock up vacuum forming box like this, it just uses a vacuum cleaner connected to the box and heat gun like you already used.

Great job Traveler gold. Maybe you could start punching out some for the Gpz coils that fit better than the originals.

Dave, I looked at those video's,  I do not know how successfull they would work for me. To many dimples.
N B, they are really easy to do, all you need is a jigsaw, and heat gun. The wifes hair dryer was not hot enough.
Trace the coil, cut out and mould plastic over template.
For many they never wear out a skid plate, but for us, the last time in Tibooburra the 2300 skid plate lasted about 5 days. Very sharp quartz. Lots and lots of duct tape but to messy.
Worked out can make 6 skid plates for 2300 for $13.50 plus time.
Just sharing an idea.

Thanks for the pointers

Thanks for sharing Travelergold, great tips.
I didn't even know about HIPS, and with it being heaps cheaper than ABS I've ordered a couple of sheets.
I've been wanting to give thermoforming a go for a long time but the cost of ABS didn't make it worth the trouble.
Cheers
Kev. 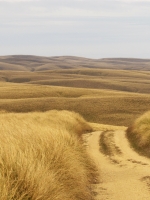 Re skid plates that we have moulded, the wife has used for a couple days now and the one I put on her machine is unmarked. If a genuine one was on there it would be nearly stuffed by now.   It certainly takes some knocks and the sharp quartz and shisty slate type material here in Tibooburra just cuts and scrapes the leading edges of original skid plates.
If any body wants to purchase one, please pm us, will work out what on or two are with post, roughly $8.00 each plus about $10 for post but need to check first.
I am also going to make some skid plates for the 14" 7000 coil, and for the 10" X coil. Will be about a month till they ready.
Cheers Travelergold

Thanks! I'll definitely try to make it. I think it will be very useful.

Gave one of these skid plates to a mate and has been used and abused and still looks like new. He gives them a real hammering. The plastic is brilliant for this purpose, will never wear out.

Great post, I love DIY wherever possible so this will be a neat little project. Thanks.

For those that do not know me, i have bad health issues and can no longer work. But making these plates i can do when feeling ok. For me it is very gratifying and good for my mind and self worth as can sit at outside table and do at my leisure.
I think i posted for those that want to try themselves the type of plastic, as there is lots of different plastics but not all are suitable for purpose.  Getting mould right so cover fits snug is bit of a knack. Also a tip, do not strech plastic over mould as you defeat reason for making as the bottom edge takes all the hammering and wear. It has to be moulded over the mould. Just ask if you need to know more.
Am happy to make and post for those that cant be bothered trying themselves.
Davsgold has seen them on this forum, ask him his thoughts.

Yes we spent a few days with Travelergold and his Mrs on our way back from WA a couple of weeks ago, he showed me the skidplates he has made for the 2300 and I reckon they just might outlast climate change,

they are thicker and tougher than the originals by far, and with a bit of an extension over the knuckle area as well is a great idea, why the originals leave this area bare, well I'll let you guess on that one.

I imagine that skid plates for other coils could be made like this as well.

Thanks Wally and Mrs for a great few days we spent with you in the beautiful Adelaide area.

Travelergold wrote:Gave one of these skid plates to a mate and has been used and abused and still looks like new. He gives them a real hammering. The plastic is brilliant for this purpose, will never wear out.

I have been making my own skid plates for 7 years or more from polycarbonate, the only problem I found is when you are making a few they get easier to make,but as they last for a couple of years it’s like starting from scratch again,I have made skidplates for minelab 8” & 11”, sdc2300, coiltek elite 14”, nuggetfinder 12x7, 14x7, 14” spoked advantage, 12” solid evo,15” spoked evo & 19” spoked evo.
I have not used tape on any of my skid plates to hold them on as they fit better than the originals.

What method are you using to form the polycarbonate to shape, do yo have a vacuum former, or just heat and press to shape like Travelergold is doing.

I have watche a few youtube videos of Vacuum forming various things including detector coil shells.

What method are you using to form the polycarbonate to shape, do yo have a vacuum former, or just heat and press to shape like Travelergold is doing.

I have watche a few youtube videos of Vacuum forming various things including detector coil shells.

I tried a few different ways but using a heat gun was the easiest as it cools very quickly, If I had access to a vacuum forming machine I would have been making them by the hundreds by now, I did think of getting in touch with a vacuum forming place to mass produce them but life got in the way.
Making my own has saved me hundreds and hundreds of dollars considering a small skid plate costs $20 and a 1.2 x 2.4m sheet of polycarbonate cost me $120 or so