"That detector will go deep mate" I looked around and there stood your average beach detectorist with his Etrac and gold snoop - he just left me for dead.

Three days a week in holiday times, no wonder they left the rubbish for the discrimation on the Etrac tells him what I picked up. I was cleaning his beach. He only had to skim over the top 3 inches, for he had run over the beach several times previously ignoring the rubbish. His long handled scoop, with a flick of his wrist,held his prize and he moved on. 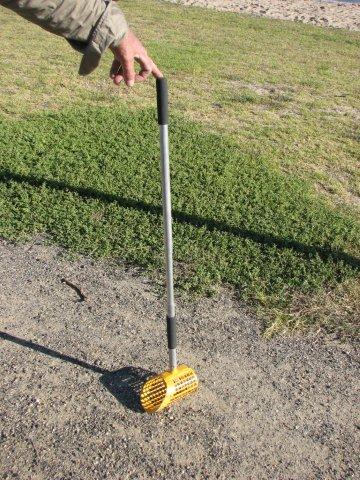 Well, I still had my 10c piece anyway and learnt a lot. Horses for courses.

Now where can i find a beach he hasn't done and they dropped all those jewels, coins - aaaaaaahhhhhhhhh!

Like most detectorists I enjoy a play on the beach, but like you jefgold I only" skirt around the edges ".

A cobber who also plays the beaches has designed and built a long handled device with( stainless steel )jaws he can open and close....he also uses an underwater detector......he walks in the surf where most valuables are lost.......last year he found a $3000 diamond ring.
My story (for posterity) is when I was detecting on Mission Beach.....it was a perfect day....gentle surf...blue ocean....fresh coconuts dropping from the trees.......there I was head down focused on the white sand, when I stopped abruptly..................there they were ....two young females sunbathing topless!!!!!!!!!!!!!!They had that expression of " you DOB" using a detector as an excuse to perve......I just mumbled an apology, walked around them and carried on.......As they say,"never complain and never explain".