A Re Do of previous topic.

A pic of the Chelyabinsk meteor just at the moment of detonation.
It appears to be an elongated slightly streamlined object with a few bumpy bits on the underside. 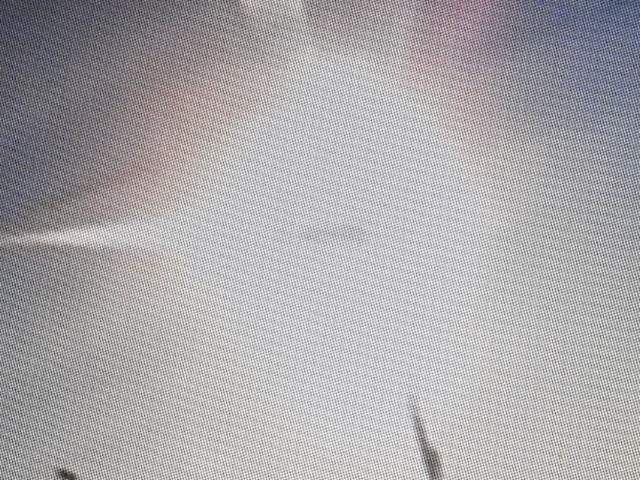 cool, wouldn't want to be under it

Notice that the contrail is a double trail. Maybe the object was tumbling?? 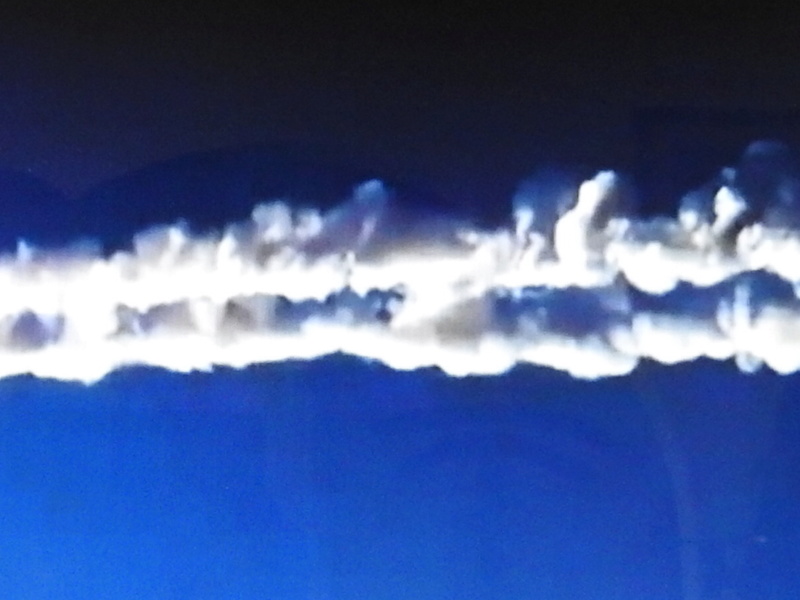 Then it did a bit of a flip and became a narrower double contrail. 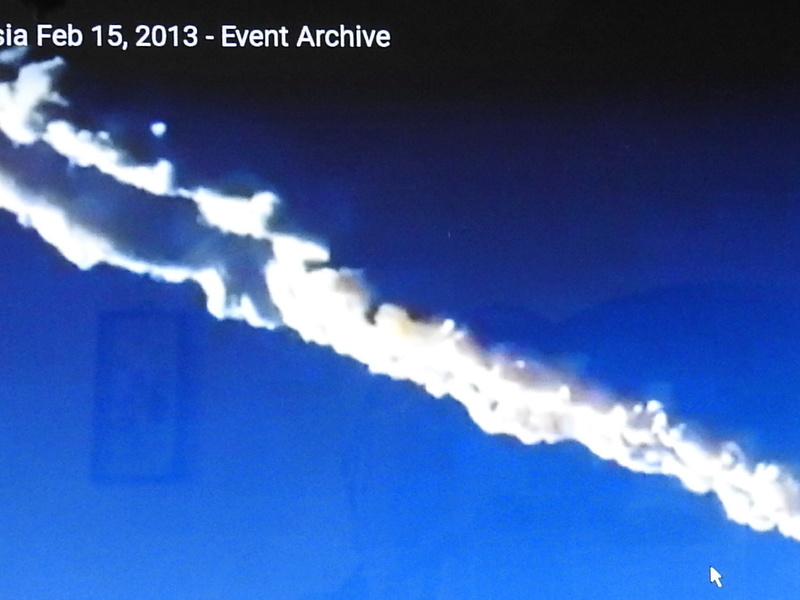 Then the main body and some other bits and pieces moved ahead of the detonation area after a second explosion. 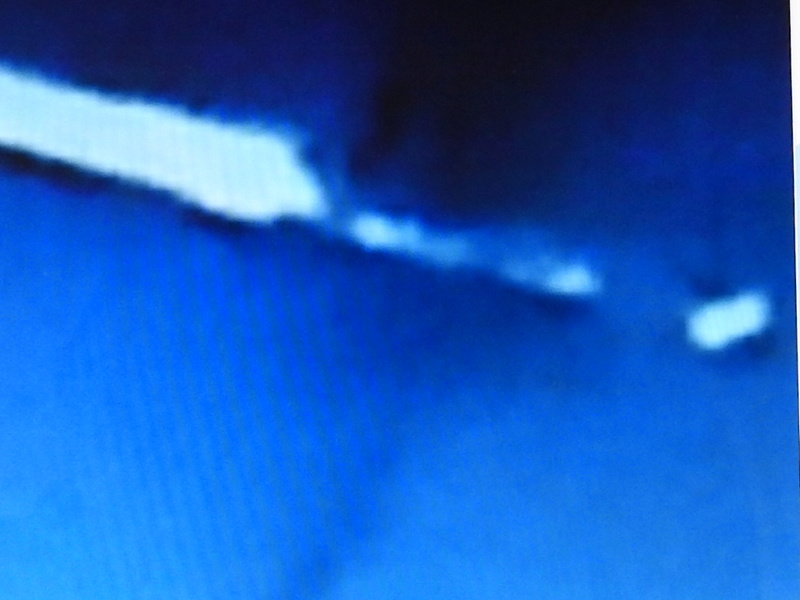 There was a repeat of the film on SBS last week,
in Sydney

Something traveling at around 40,000km/hour is going the have a bit of trouble changing direction in a hurry even after it explodes. And yes I did wonder about how it took nearly 3 minutes for the shock wave to hit, I know sound only travels at around 1200km/hour and light travels at more like 300,000km/second. So it would take the sound wave/shock wave 3 seconds to travel aprox 60km.

Here are a couple of links.
https://www.youtube.com/watch?v=dpmXyJrs7iU

Thanks for the link Adrian, Interesting stuff.

Found a video clip that displays the meteor at the moment of the first detonation until when the blast wave hits the ground and the time is not the 3 minutes that has been reported, it is 13 seconds which means that the object was only 4.3 km above ground when it exploded and that would explain how the blast wave was strong enough to knock doors of their hinges and smash windows.
If the time was 3 minutes then the object would have been approx 59km alt and if it had exploded at that altitude the blast wave would have been very weak by the time it hit the ground.

This is the clip.
See if you can find the section referred to and do your own calculations for the altitude.
https://www.youtube.com/watch?v=dpmXyJrs7iU

Here is an official report.
https://en.wikipedia.org/wiki/Chelyabinsk_meteor

It'd be interesting, also, to know if the various meteorite/asteroid/satellite tracking apps and organisations predicted this one ... or not.

I guess we will never know. It apparently sneaked in unannounced.

Another vid for those who like hairy landings and UFOs.
https://www.youtube.com/watch?v=fEqVthvHYKM

Wonder what this is.
Near the end of this vid

Some interesting things in that series Adrian, the only thing that I can figure regarding that last very interesting one is that it is a winged plane travelling through some weird atmospherics. You can see the turbulence from the wing tips but little else. It would be sort of what I would expect from a craft such as the space shuttle and may be a Rusky version of it.

adrian ss wrote:I guess we will never know. It apparently sneaked in unannounced.

Another vid for those who like hairy landings and UFOs.
https://www.youtube.com/watch?v=fEqVthvHYKM

Wonder what this is.
Near the end of this vid

The shot at the end appears to show a super-dense condensation trail behind a two or three engine commercial aircraft but it's an intriguing video. I can confirm that the three glowing white UFOs earlier in the video were added to the footage afterwards and were faked on a home computer.  But the footage towards the end of the object you're referring to appears to be genuine.  Can't tell what it is because of the angle but it does look like it had two engines below a wing on either side of an aircraft as it descends. 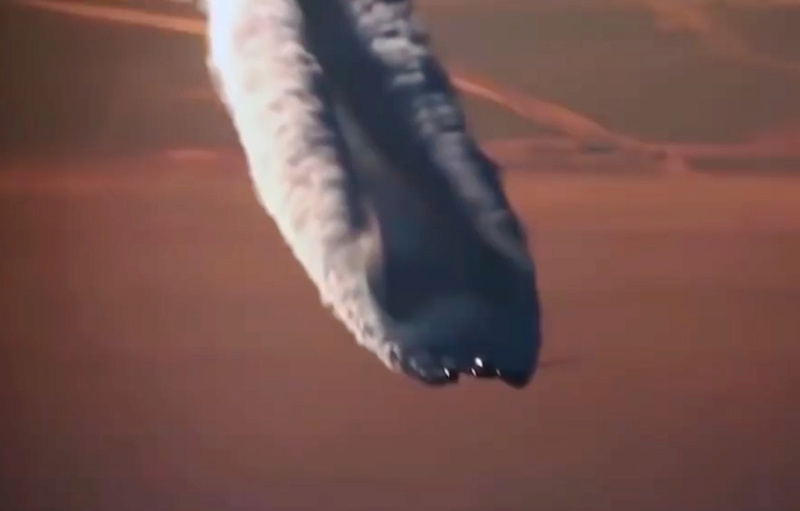 We've definitely seen objects in the sky that defy all logic when you watch them maneuver and two of our fellow observers included both a police officer and a pilot.  It was quite interesting to watch them (there were four) and they were in low orbit over the Cooma area in a perfectly straight line where quite a lot of UFO sightings have been made over the years.  Since this was in 2006, before the laser laws came into effect in 2011, we directed a >1 watt laser at one of them and it winked out before reappearing a few miles away and then it rejoined the formation again. Tried to photograph them but my camera batteries were dead and the spare was in the car.  By the time I refitted the batteries and set up a tripod the objects were too far away to bother photographing. Saw something similar decades ago and this was a formation of three objects that re-positioned themselves in different parts of the sky before becoming motionless.  Fascinating to watch but no idea what they could be.  They also made right-angle turns in the sky which even modern aircraft can't do. 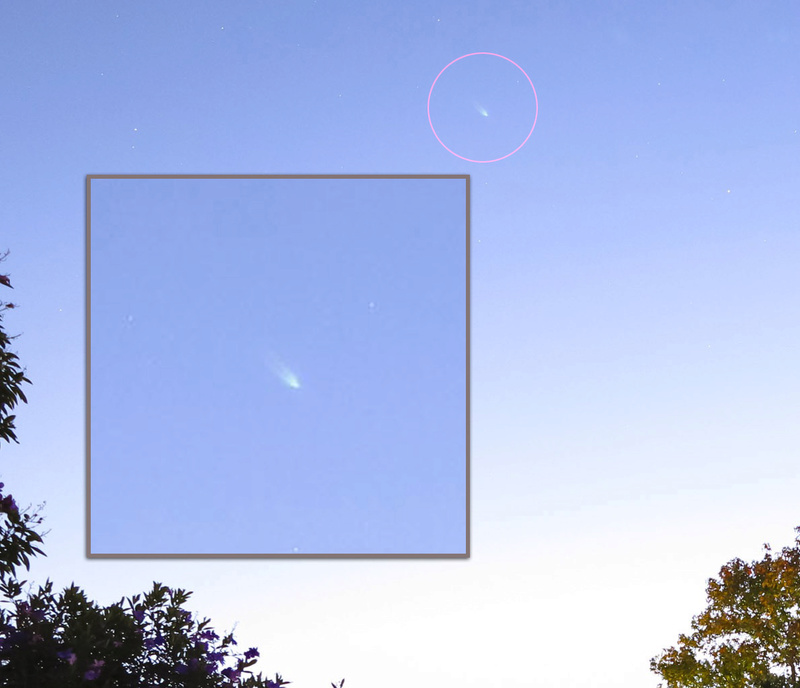 (ABOVE) This is a picture I took quite a few years ago while trying to capture a long exposure of car tail lights in a city street and when I was going through the pictures again years later, I saw this object in the sky above the street I was photographing.  What's interesting is that when I went through the comet database, there was one in the sky at that time on that day in that general area of the sky.  I had no idea!  If I'd known I would have tried to catch more shots as the light from the sunset dimmed further.

(BELOW) - Last night we were photographing the ISS flyby with the Moon and I had to take a test shot with one of my cameras (fitted with a wide lens) to determine focus and to see what length of exposure I could get away with... and I snapped this object in the test shot that looked a bit like a Comet or a Meteor.  But my best guess is that it's probably the sunlight hitting the plume of condensation behind a high altitude aircraft that was cruising just above the Earth's shadow region.  I didn't see it at the time that the picture was taken.  It would be nice if it was a meteor but it's more likely to be an aircraft's vapor trail.  I also had no idea that the ISS turns red before it winks out in the Earth's shadow... so I might try to catch that effect next time. 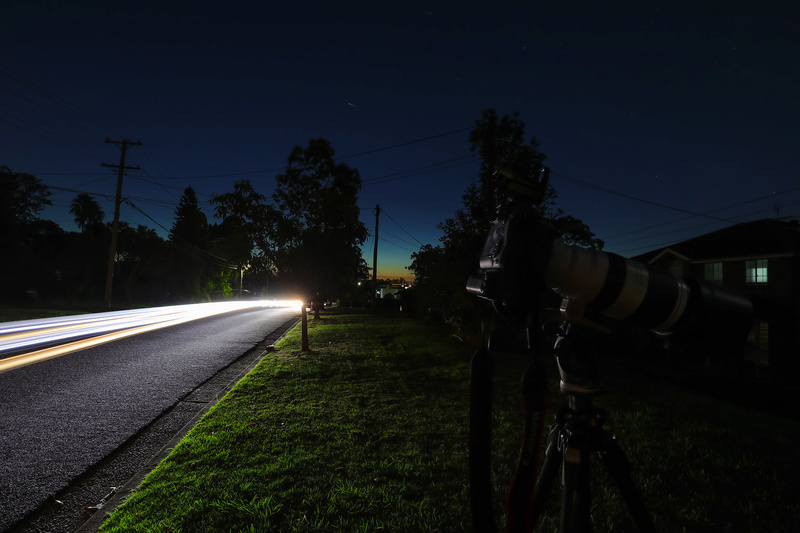 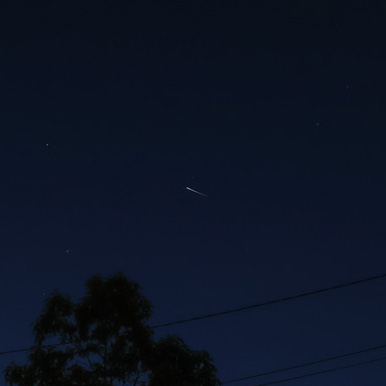 Hi n_d.
Yes I agree re the three white lights. and it looks like one of those contrails is an aircraft but the last shot is not so easy to figure out but it looks like a meteor,  or single engine jet contrail and being a comet is a slight possibility.

You clever persons  can find in this clip the proof that the Ruski meteor was only 4.3 km above the ground when it exploded.
So have a go, see what you can find.
https://www.youtube.com/watch?v=dpmXyJrs7iU

So tell us why we care, and if it was not a meteor what were the bits that scientists and others were picking out of holes in the snow?

I couldn't give a rats bum who cares or doesn't care, I was posting for interest sake. Not because I believed the object may or may not have been a meteor.

I never said it wasn't interesting, it is, but it just seemed like it was turning into a bit of a conspiracy theory, I don't know why you deleted most of your posts about it.

The moment my posts begin to be misinterpreted (conspiracy theories had not even entered my mind) I take them down to avoid argument and conflict. Plus I get shirty very easily these days with all this bloody pain in my back, knees  and everywhere else, that my docs won't give me any meds to fix.....Reckons I will get addicted to it......Like big bloody deal!..

Adrian I am sorry to hear your in pain all the time, I meant no harm and was just trying to liven up the post a bit, please take my apology if I offended you, I certainly never meant to.

No worries Dave. No apologies necessary. It's not you it's me

I have attempted to re do the posts but they are a bit disjointed now.
Maybe management can clean it up a bit??