A very good and meaningful reason to keep Australia Day as it is as, I must agree with Tony here.

The others have got it very wrong and are very clueless about our history as how Australia has progressed as a Nation.

Well done Tony for standing up for what is Right, "Again"

Australia Day has zero to do with Aborigines.
It is our day and our celebration.

Maybe a Sorry from the Aborigines is also required. They appear to be completely out of touch with their true past.

Our history is being re-written and our children are growing up with false knowledge of our history in this country. Why??? There is always at least two sides to every story.

No I am not going to validate any of this. Do your own research.

So if an alien race turns up tomorrow, hunts you down , poisons you, steals your childen and puts you on reservations. When alien day comes every year you could celebrate .Dont make laugh
Dig

History has made Australia what it is today.  This is what Tony is saying.

We "DO NOT" want to sweep things under the carpet as this is just masking the problems.

Let's embrace the good and the bad and make Australia better and only then can we move on......... Together. (Australia Day)

Dig24crt wrote:So if an alien race turns up tomorrow, hunts you down , poisons you, steals your childen and puts you on reservations. When alien day comes every year you could celebrate .Dont make laugh
Dig

The vast majority of so called stolen generation were half cast or of mixed white and black-man race.
The full blood male members of a tribe could not in many cases tolerate the part white children and as a result they were starved, miss treated, sexually abused and fed mainly the left overs that the rest of the tribe did not want. Whenever they were discovered by the white man an attempt was made to take them back into our society and to give them a better chance of a civilised and safe life. Our ancestors felt a duty and responsibility towards these  kids who if left without help, were destined to a life of hellish treatment (By our standards at the time) from the male members of the tribe. I guess an argument against this could be that they treated some of their own full blood children in a similar manner, so what was the difference?

Maybe our ancestors should have left these kids to suffer their fate and then today we would have the descendants of these kids suing the Government today for their ancestors not saving them from the mistreatment by the Aborigines.

The strange thing is that  many people in Australia  today who may be as low or even lower than  10% aboriginal believe they are Aboriginal and except aboriginal history as their sole history and are entitled to the welfare aid  given to full blood Aborigines. They choose to ignore their majority white heritage.

We cannot win no matter what road we take.

Dig24crt wrote:So if an alien race turns up tomorrow, hunts you down , poisons you, steals your children and puts you on reservations. When alien day comes every year you could celebrate .Dont make laugh
Dig

Why would I want to celebrate Alien day? That would be their celebration for whatever reason it may be. I would more likely have a celebration or remembrance day of my own.

Why should we be forced to name Eyres Rock on our maps as Uluru??
This rock had many names depending on which aboriginal tribe you were from.
We are a different tribe and called it Eyres Rock to remind us of the exploits of John Eyre.

It appears that many people are uncertain as to the correct spelling of Edward John Eyre, including myself and many historians. So maybe somebody can come up with the correct spelling. a copy of something he signed would put this to rest. I have noticed his name spelt many different ways as far back as my early school days in  (Grade three) when i first learnt of this explorer.

What part of decimating a population dont you get.

I have to go now because we are still clearing out my just deceased sister in laws Govy house on the other side of town.
Will think of an answer to your question to-night when we get home.
but as I said earlier. There is two sides to every argument and usually each has its merits and de merits.

We are a different ends of the spectrum on this.The only way to truly understand any difference is to walk in the other persons shoes.Best we let this rest in what must be a sad time for you
Cheers Dig

G'day fellas. I see things are escalating to an uncomfortable level here. Could we please celebrate Australia Day for what it stands for, an official national Day for Australia. It marks the anniversary of the 1778 arrival of the first Fleet of British Ships at Port Jackson, New South Wales & the raising of the Flag at Sydney Cove, by Governor Arthur Phillip. Bringing in a bias of who was responsible for doing this or doing that during early colonisation, will only ruffles feathers. If this gets further out of hand I will be forced to lock this thread up.

Fair enough Kon. In the end These arguments always turn sour and I and my wife have been a tad snappy at people the past week or so.

Dig24crt wrote:We are a different ends of the spectrum on this.The only way to truly understand any difference is to walk in the other persons shoes.Best we let this rest in what must be a sad time for you
Cheers Dig

Sorry mate, I have been a bit touchy these past few days.

Hi fellas
Talking about changing the date of something that happened 230 years will not make any
Difference to domestic violence,deaths in custody,youth suicide,education,alcohol abuse
In aboriginal communities. Politicising this issue only creates division and does nothing
To further conditions in aboriginal communities.
Cheers Simmo

The nation "Australia" came into being on 1 January 1901. ( https://www.australia.gov.au/about-government/how-government-works/federation )

The country of Australia (land mass if you like) has been around for quite a bit longer than that.

I saw a decendant of Captain Cook on tele the other day and he rerckoned 26th of January was simply a naval event not the beginning of white settlement. In other words he reckoned we have the wrong date. I don't care if it is the wrong date I will still regard it as Australia day and celebrate not onlyAustralia day but my wedding anniversary. But if it is the wrong date, and I think he is right, then the Aboriginal activists do not have an argument. Besides they have more dates per year to celebrate their culture than we do. As far as I'm concerned Australia day should bring ALL Australians together. That is my hope anyway.

Wonderful way to get your point across, NOT! 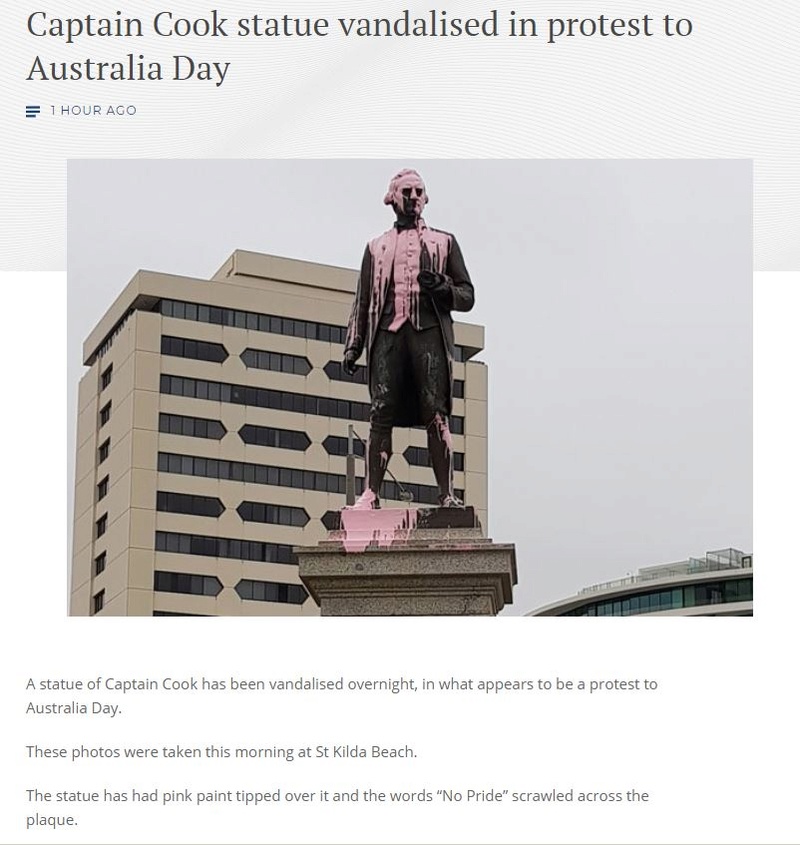 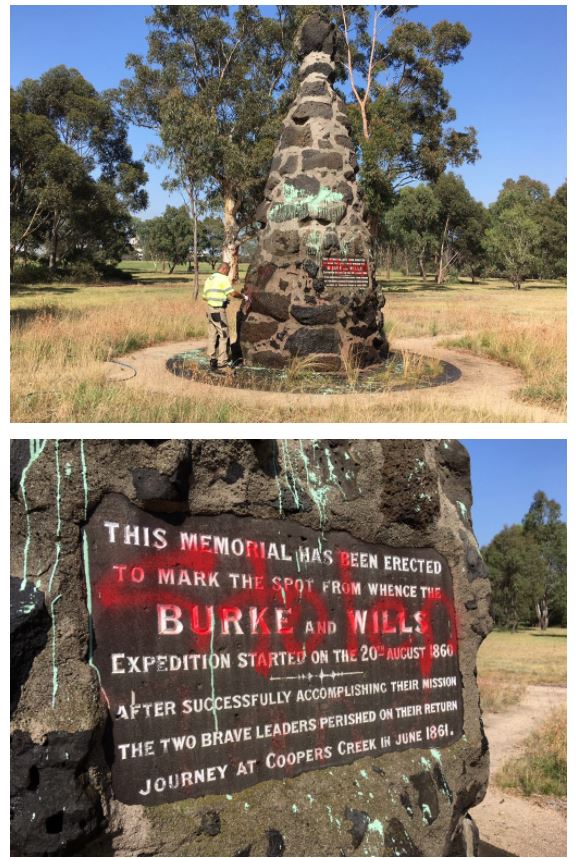 Redfin, the only thing we can do about this is clean it up and wonder at the ignorance of people who would do this. I'm pretty sure it wouldn't be full blood Aboriginals most "Aboriginal" activists are white, or nearly so, so we shouldn't blame Aboriginals for this sort of thing.

I don't think it would matter if the Australia Day was changed to another time of the year, we will still get protesters say we should not celebrate Australia Day because of white settlement here. Changing the date is not going to change history.
That,s all I'm going to say on the subject !!
wombat

Fellas, i'm looking forward to celebrating Australia Day, with a nice, peace-full, barbecue/drink gathering, with family & friends. Mind you, I'm quite sure the lamb ain't thinking the same?

I'm with you Kon, beer is on ice, heaps of meat and salads.
All my adult children are coming over, and grandkids.
Will be a beaut day, just like all the others past.

Australia Day is also our wedding anniversary. My wife chose that date so I wouldn't forget it. So we have two huge reasons to celebrate.

Everyone I hope you enjoy the day. Happy Australia Day.

Perhaps any talk should cease on date change , as the ideal date is in the future when we become  a Republic. We will be a powerhouse in the pacific.Already our GDP is just short of Russia. We are a brilliant country that if we had open immigration it would be standing room only.Theres something about being an Aussie,We could never have an idiot like Trump at the reigns. We have that fair go built into our dna.Things will change, but they wont be for the worse.
Have a good one
Cheers Dig

adrian ss wrote:Why should we be forced to name Eyres Rock on our maps as Uluru??
This rock had many names depending on which aboriginal tribe you were from.
We are a different tribe and called it Eyres Rock to remind us of the exploits of John Eyre.

It appears that many people are uncertain as to the correct spelling of Edward John Eyre, including myself and many historians. So maybe somebody can come up with the correct spelling. a copy of something he signed would put this to rest. I have noticed his name spelt many different ways as far back as my early school days in  (Grade three) when i first learnt of this explorer.

Except that the rock wasn't named for Edward John Eyre, it was named after Sir Henry Ayers, eighth Premier of South Australia:

Seems I have had my Eyres and Ayres mixed up a tad.
Makes no difference to my argument.
We should know the rock and other geological features by the name attributed to them by us not according to Aboriginal names, unless of course the only name given is an Aboriginal name. There are plenty of features around Australia with Aboriginal names only and that is fine.

But why try to change our history?/
Teaching our kids that we are invaders is totally nuts .
Every human on this planet arrived at where he is by travelling and roaming across the land and sea. We are nomads and we have been fighting with each other since the beginning. We came here from other countries and so did the Aborigines. We fought to hold ground and so did the Aborigines fight amongst different tribes to hold ground....We are simply a very large and powerful tribe and when a stronger one comes along we in turn will be defeated.

This is a futile debate, name one country around the world that has it's original inhabitants.
Every country was invaded at some point in history and after the unrest moved forward.
Let we Australians unite and move forward.

And when China fully takes over we will pee off for a bit then get over it
and happily live the way China dictates.

Just remember Adrian , ***** wasnt white and either was his dad and Ive heard the rumor that he has a liking for people for people than can show a bit of empathy
Cheers