No! but I suppose I should, means more hours looking and finding the yellow to pay for it.

Quote{Tie a bit of fishing line to the plug lead, run the line to the van through the window....pull the line and the geny stops. Its not cheap...but it will work. }quote

Hmmmm good idea, I even thought about one of those timer plugs.. I still have one problem though. MIKE!!!

forgot he reads this

I tell ya it's all

Any way we better get back on topic guys.

Narrawa wrote:Jen58,
Tie a bit of fishing line to the plug lead, run the line to the van through the window....pull the line and the geny stops. Its not cheap...but it will work.

**Sorry this is off topic** Reminds me. A farmer I knew (years ago) was using an diesel engine driven water pump to top up a stock water tank out in the back blocks, he would drive out there, fuel up, start the pump and then a few hours later drive back out there to turn the pump off. He had established the pump needed to be run approx 4 hours to fill the tank.
I went away found an old wind up alarm clock. Machined a small drum and fitted it to the clock. Some fishing line wound around the drum connected to a trip that released a counter weight which dropped and shut the diesel down. Farmer would go out fill up with diesel set the alarm clock to go off at prescribed time and not have to return until he next wanted to fill the tank. He was over the moon cutting his driving by half.

Nightjar,
Is the xantrex the 60Amp model.??

Yes, but will need to check.

nightjar, you mention the 30i, what is model if that? is it the square looking honda tradie looking unit?

Travelergold our Eu30i is the square shape one it has 2 wheels and a handle that folds down so you can trolley it around. But it won't fit into the Genny door in my van as was only for the 20i.

It is a very good generator for running aircon, microwave and it will run a small welder to.

Travelgold,
Our model is the EU30is, different to Mikes, no wheels.
Carry it on the back of my ute, it stays there for whole trip and is run from there.
http://www.generatorstore.com.au/honda-eu30is/ 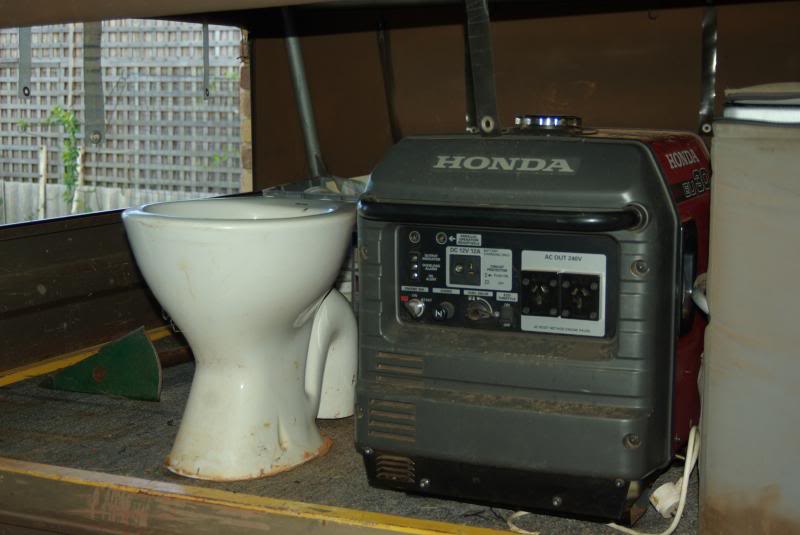 G'day Peter I like your porta loo too. Might need carry plenty of water for that one.

Back to topic. Your Genny looks like its a key start one too???

hhaha, Yep! Our porta potty, my truck runs on methane.

In reality found it out in the scrub and brought it home, drilled a hole in the bottom and it is now a flower pot in the garden.

Thanks fella's, jeeze love your setup nightjar. If only it was so easy. Kulkyne will not do job either so we now know, so now looking at cheap 4.4kva electric start/remote start units. just need to find one with some sort of warrantee. Around $650 is cheap if it lasts 12mths.

We were visiting our daughter and while we were there we ended up buying a new Extra Heavy duty 15 Amp lead. Well when we arrived back home last night I disconnected the old one and connected the new one. Today seeing how the temps are back into the low 30s and our van is like an oven I decided to start the Genny (20i) and thought I would try the air con. Wow it is still running and that was over an hour ago. Thanks Narrawa as you suggested this a long time ago and obviously the other leads I tried were no good.

All good Mike,
Just got off the phone to Honda in regards to the pull cord issue, its at the dealers discretion.

On another note,
Oil used in the black Honda bottle is supplied by Caltex. Could not would not confirm oil used before 2007 was synthetic oil supplied by Esso/mobile one, i had to send more info on my research for them to confirm.??? Apparently small engine oils were not the same oil used in other engines sold under the Honda banner.?
Scare tactic me reckons, you'll use less oil due to less oil changes if you use full synthetic oil. No damage could come about by using full or half synthetic oils in a motor if the same weight is used. ?
Fault memo that went out to dealers in regards to a faulty wiring harness effecting models withing the serial number range.
2040000-2126930 Stop producing AC or very low AC out.

Mine is a latter model and not effected...phew!!

Very interesting she admits there is a fault and it is up to the dealers discretion??

The oil well I always use the Honda one, but I can see what you are saying.
I will have to check the SNo on ours, but so far we haven't had any problems except for the lead. This lead was the one we got with our van which is just over 3 years old now and this lead was orange when it was new now it is yellow from being out in the sun, so I reckon its cheap s&$t! The new lead is a lot heavier and orange.