I've been into gold prospecting for a couple of months now so im still a beginner. I got myself a GPX-4000 recently.

I'm thinking of building a GPS guided unmanned vehicle that would do the detecting for me. So it would be like a small remote control off road vehicle (probably electric if I can get enough power and running time), it would need a decent size motor to pull the weight of the GPX and the frame i build for it, and would need big tyres to get over small obstacles, but instead of being remote control, it would have a small Linux computer and GPS on board, and will follow a path of pre-programmed GPS waypoints (this part is not very hard to do using Arduno).

- Follow a path of pre-defined GPS waypoints autonomously covering a large square area
- Drag a modified GPX-4000 behind it on some type of light weight frame with wheels
- Connect the audio (speaker) cable from the GPX-4000 into the Linux computers microphone input
- Write some software that runs on the onboard Linux PC that "listens" to the real time audio stream generated by the GPX-4000, and every time it gets a signal, immediately log the GPS co-ordinates to a file

My vision is that you could take it to a big flat area like those that exist in WA, program in the waypoints, then go and have a few beers while you wait. When it's finished, it comes back "home" where you download the data to your laptop, convert it to a google earth KMZ file, then go straight to each of the targets and dig them.

I've already got most of the parts that I need to build it except the vehicle itself. I do have some vehicles I've been playing with but they are too small, I need to get something bigger, with a longer lasting battery and with more power and offroad capabilites, as its going to be lugging the weight of the GPX-4000 around. I just need to sit down and draw up some plans and then have a look around at what vehicles are avaiable. The hardest part will probably be developing the software that listens to the audio feed from the GPX and identifies sounds that are "signals".

Are there any other programmers or RC enthusiasts on this forum that might be interested in putting our ideas together and building this baby?

good luck with your idea mate ,i would imagine there would be a market for such a thing but your invention is not for me. i didn`t get into detecting so i could go to the pub

Yeah Dave It would probably take some of the fun out of finding the targets, I agree mate. It's not for everyone I guess just nerds like me. Im not building it to sell it to anyone, just as a hobby.

This is something like the vehicle I would use:

brad28b wrote: Im not building it to sell it to anyone, just as a hobby.

it sounds like an interesting project ( and i do think there would be a market for such a thing ) , but it would be too damned complicated for me

Ground balancing could be a tad problematic

If you ground balance the machine yourself when it begins, assuming the mineralisation of the ground over the target area is all similar (might have to do smaller target areas to ensure that), it wouldn't need to be rebalanced too often would it?

someday wrote:Ground balancing could be a tad problematic

i thought about that , you would just have to run in tracking (probably fast tracking) and the vehicle would have to go pretty slow
dave

Could work! Lots of false signals to contend with while the tracking mode sorts itself out? I thought tracking was changing the auto tune, Me confused!
I'll shut up now and read the book again on tracking!

Your right Dave. Just flicked through my 5000 owners manual. I assume then the 4000 has the same feature!
The book also states a Double D is more suited running in tracking. Reducing the risk of tracking out faint deep targets!
Go for it Brad28b.

I've got a DD nugget finder coil for it so I will start out using that one.

The part that I thought I would stumble most on was the audio detection and signal processing - how to detect a change in pitch and identify that as a signal. The way I thought it would work would be to take sound samples every x milliseconds, and compare them to the last 10 or so samples and based on that identify differences in pitch between the samples. Some prretty complex coding. But I think I've found an already existing open-source solution that might work called Audacity which was originally developed to do musical pitch analysis. And I've actually used it before although not in a "real-time" way. Im going to do some reading up on it and work out if it can handle real time audio analysis.

Once I can detect a change in pitch, logging the GPS co-ordinates is easy, I've already developed code that does that.

Ground balancing will be easy haven't you both seen what Granny did her Morris Minor on the RACV add on TV??, just a scaled plan version of those air shocks they use on the PIMP mobiles in the US should do the job

Has anyone read the rules about what can be used to detect here??? Might be a tad illegal.

And would it withstand the rigours of the gold fields? Like being run over by a Landcruiser?

I would still only be using hand tools to dig the minerals from the ground. I don't think it would be illegal?

brad28b wrote:I would still only be using hand tools to dig the minerals from the ground. I don't think it would be illegal?

I always thought it was the process of removing the minerals from the ground that could not use motorised equipment. So you think it would be illegal?

Go for it Brad. If ever questioned about it, Your just testing a new invention for the overseas market!

i dont know about this idea brad.... you would have trouble counting the picks and bullet holes in the dam thing when it got back

... i mean , what would you think of that thing comming out of the bush at you, there would be a few stories at the pub about alliens landing ......but its still an interesting project

Hey Brad. Great idea in theory i guess (this is only my opinion and comes from my experience, something away from your apparent technological experience).
There will be some great obstacles as you already aware I'm sure. To mention a few basics would be keeping the coil flat and fixed to enable maxim depth and capability of your machine and a satisfactory ground balance, along with inundation of the land, rocks, sticks, fences, vegetation, EMI etc and weather conditions. In the end the gps points are going to need to be gathered by a visual rather than google earth which, for your settup, would not depict a current status of the area. Along with the possibilty of sabotage out on the goldfields by other operators. Understand the gps tracking method which is great but also seems alot of time and effort which would only be double handling. Also having your detector vehicle settup will need to be basically walking speed and all in all as its a hobby of yours it is taking away the fun and appreciation of the blood sweat and tears earned in finding that yella stuff.

But still, all the best and good luck with it. Would be interesting to hear how it all goes.
Hope this doesnt come across negative
Cheers 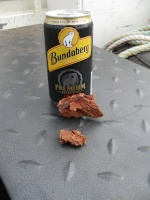 Thanks for the feedback guys, I don't mind any criticism it might help me save some time.

In regards to obstacles on the field - yes that will definately be a problem. Later on I could consider adding collision avoidance sensors and some code to "drive around" obstacles as demonstrated in the youtube videos above.

In regards to it being interferred with by others - I don't plan on letting it go out of sight. My thoughts are that it would comb something like a 200 meter x 200 meter area while you either detect elsewhere close by, or sit back and sink a few beers.

Brad, there are some huge areas over here in WA where it would work a treat

Could be made to work I guess.
Could you program it to say; Stuff it there's nothing here this is a waste of time and then automatically move to another area.
Be a bit of a pain waiting for it to come back home only to discover it had been recording in a dead area all day,
whereas if you were swinging the detector yourself you could decide if the area was a duffer before spending all day searching empty ground.

Its like trying to tickly trout in a creek its all Bulls... exkiwi

Adrian ss wrote:Could be made to work I guess.
Could you program it to say; Stuff it there's nothing here this is a waste of time and then automatically move to another area.
Be a bit of a pain waiting for it to come back home only to discover it had been recording in a dead area all day,

Yeah that wouldn't be hard to do.

For example you would just program it to say, if it hasn't found any targets within 100 meters, move on to a new set of pre-programmed co-ordinates, which you would need to have programmed into it before it left "home" base. So maybe give it 3 different areas to detect, if no signals in the first area, move to the second area, if still no signals move to the third area etc.

It would have to be a winner on Ebay.........there are thousands of "wannabe prospectors" out there who would relish watching the "Nugget Hound" being tracked on their home computer..........

Seriously, I think it would be a fascinating project.......it might just stumble onto a big slug or a reef.

I look forward to a vid on this forum.

when i got out for a swing today i was thinking about your project. unless you have bucket loads of money to throw at it you would have some formidable obsticals to overcome. one would be collision avoidence. i would think you would be hard pressed to find a piece of ground as flat as a snooker table with not 1 tree , rock , dry creek bed etc. on the plus side it would be ideal in WA in summer , you could power it with solar . on the audio problem , you could have a transmiter to transmit the signal to you , then you could sit under a nice shady tree and watch it and steer it. but then if you were going to do that it would be simpler to buy a quad and just tow a coil behind you
just some thoughts
cheers dave