hey PS, i think you ment this link

check ur link bru
lol, had the same problem linking it, you musta been on to it quick, i got it sorted eventually.

Edit: nice work Stoppsy, never thought of putting vid up like that. cheers.

one word. actually i cant think of one
cheers steve

i noticed the bit in there about the tax man taking more off them if they used electronic equiptment.

so a 3rd world country finding $150,000 nuggets and probably only getting a small portion off that to live on.

If the Tax man is to get them.

There is plenty of Gold in North Sudan for which, since the independence of the south earlier this year, the Northern Government is seeking ways to compensate the loss of their southern resources, mostly from oil income (US $4bil.) by an extended and exessive gold mining. The numbers of legal operating small prospectors supported by the govenment was and is risen dramatically and added to an improvement of the peoples live situation in the area. On the other hand there are aproximated figures of 150.000 illegal operating prospectors in the fields, accumulating a 30 metric tons of annual gold production on legal bases and a total of 70 metric tons annual production including the illegal prospecting. Most of the illegal mined gold is contraband to Egypt and sold well under market price, refined there to enter the global Gold market.

Gold transported from Sudan to Egypt is the historical way gold is takes since ages. During the reign of the pharaohs in Egypt, most of their Gold was prospected in Sudan, at the time know as Nubia.
I once had the chance to visit the Egypt museum in Cairo, the amount of Gold you can see there in public display is astonishing. One of the most popular pieces known is the Gold mask of Tu-Ench-Amun and just gives a glimpse of the gold ritchness during this period.
All made by Gold from Sudan. 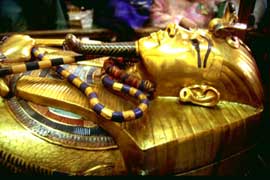 Curtsey of the Egyptian museum.

On the map, even though it’s rather outdated, you can see the Gold occurrence is quite well in Africa. But it also displays very nicely the geological aspect of Gold occurrence worldwide by the continental drift some eons ago. Wherever the drift line moved continents with enormous force, gold and many other minerals occurs as result of it.