It look like everyone is on the gold these days:
http://www.heraldsun.com.au/news/more-news/dick-smith-searches-for-legendary-riches/story-fn7x8me2-1226147309059

just read that article, is he taking the mickey??

Good afternoon all,
Back in 1990 I sat in Lasseter's cave and tried to `tune in' and get the location for the reef. What I heard was, `England seven wickets for two hundred and eighty six.'
Talking with some of the local, older people they were not happy that there are stories of Lasseter being harassed by Aborigines. They said that in fact the people there helped Lasseter.
Around that area I came across a huge camel loping along the road and you could not but wonder if he was related to the camels that broke away from Lasseter. Perhaps I should have tried to lassoo one to check his foot pads.
I gather that Lasseter left his cave to try and walk out in extremely high temperatures in February before carking it at 90 odd ks.
Around that same time there was a tradie at one of the settlements who claimed to have found the reef.
Having read a variety of sources I find myself inclined to the view that Lasseter could spin a tale and never did find his reef. It will be interesting to see if we ever do hear the results of Dick Smith's quartz reef being assayed.
Yet, I daresay there is gold out in them thar hills and if enough people keep searching for `Lasseter's reef' then some one is bound to find some gold.
May all your pebbles turn into nuggets.
Yours tropically, Harry

I too sat in Lasseter's cave, a few weeks ago. Beautiful country around there.

I read the book Lasseter's Last Ride by Ion L Idriess when I was a kid, boy did that get my imagination going...
In the book I remember the aborigines pointed the bone at Lasseter, that's probably where the stories of the conflict with the aborigines started. My understanding is he was walking with them (hence they were helping him) from the cave to the Olgas, when he died.

so going to find, and sit in that cave...

It's easy to get to. From Laverton go about 800km up the Great Central Road, cross the NT border, just past Docker River. It's sign posted from the road. You need 2 aboriginal permits (WA part and NT part) for the Great Central Rd, you can apply on-line and get them instantly now.

It's easy to get to. From Laverton go about 800km up the Great Central Road, cross the NT border, just past Docker River. It's sign posted from the road. You need 2 aboriginal permits (WA part and NT part) for the Great Central Rd, you can apply on-line and get them instantly now.

is it really that easy??

Well if what Lasseter wrote in his diary to his wife is anything to go by, it appears that some aborigines did give him a rough time and as far as the whole deal being a bit of a BS story, it seems to me to be a bloody lot of grief and heartache to go through just for a lark. Don'tcha Think!?
His expedition journal and kit has never been found (as far as I know) and this he buried with the intention that it be protected from the weather and recovered by those who found him. it is unlikely to be far from where he died because it would have been one of the last things he was able to do before packing it in.
Whereas he would have continued to write in his personal diary right up to his last breath.
He also said that he pegged the reef and if he did it would have been done in the correct manner and whoever finds this reef will find Lasseters marker pegs also.

After reading the Dick Smith story, I did some reading about the last expedition. It was reported that by the time the party reached Mt Marjorie (now Mt Leisler) there was bad blood between Lasseter and the rest of the party and this was the location from where Lasseter went it alone. But, Lasseter did try to tell them they were still about 150kms north of where they should be. Well using the rule function on google earth, approx 150+a bit kms south is the Dock River area.
Then in 2007, a chap from Darwin said he had found it 500kms west of Alice Springs. Once again using the rule function and what do ya get, the Docker River settlement area. Personally I think Lasseter was a con man who just needed money to go prospecting but got more than he asked for.
but here's something interesting and I hope the image downloads. about 35-40kms north of the settlement there is a patch that appears to have been gridded and drilled but it looks nothing like a massive quartz ridge. It's an interesting legend, and if it is out there, I'm sure the mining companies would have found it by now.

Yes you would think so aye.
It was supposed to be a large reef upwards of 10k long and to mine a reef that size would require significant machinery and a crusher and I doubt that activity like that would go unnoticed for very long.
It's a bugger of a place out there even if you do have a camper van and porta potties n stuff, it will fry your nuts off in the blink of an eye if you are not on the ball. Just for Lasseter to get to where he did alone and still live for significant time after he got there was a great feat of bushmanship.

This caught my eye on Google Earth 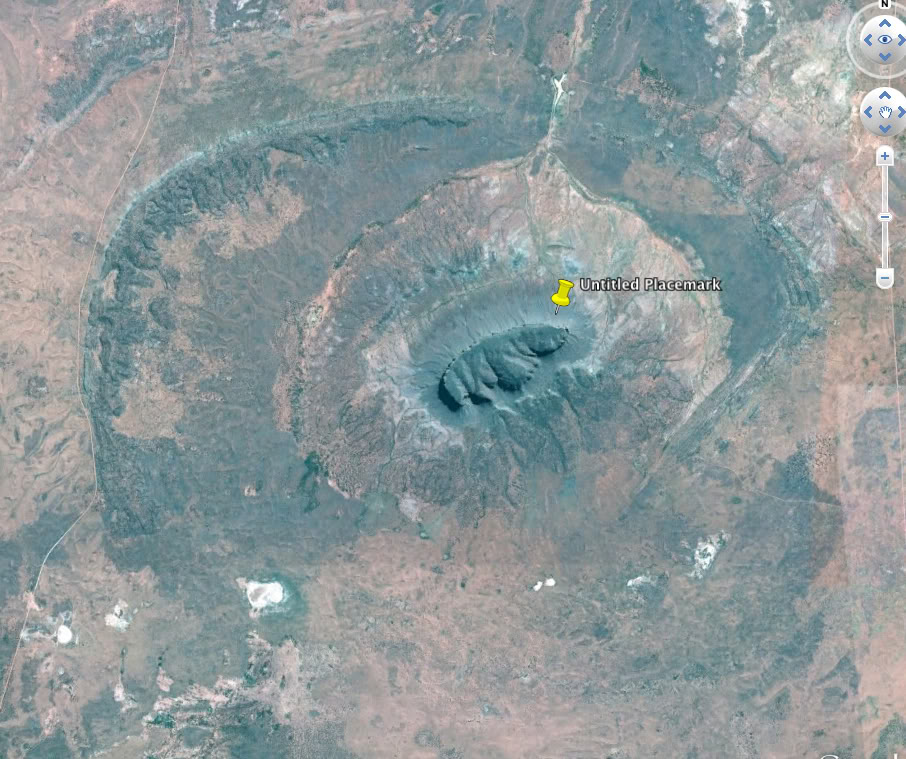 That's an interesting formation. Looks like a giant mole, the underground blind kind.