What are the international major gold markets?

The London gold market is by far the largest global centre of OTC transactions. Its gold spot-price is fixed twice each business day at 10:30 am and 3:00 pm (London time) in USD, GBP, and EUR. London prices have a great influence on the world gold market price.

Which is the largest gold producing country?

According to GFMS as of 2012, a total of 174,100 tonnes of gold has been mined in human history. Currently, the world consumption of gold produced is about 50% in jewellery, 40% in investments, and 10% in industry. In industry, gold is commonly used in electronics, dentistry, commercial chemistry and other fields. Its characteristic of high malleability, ductility, resistance to corrosion and most chemical reactions, and conductivity of electricity have led to many more uses, including colored-glass production, electric wiring, and gold leafing.

Seems that we hang most of it around oue necks.

Re: What is the use of gold?

And it gets a lot of people off their behinds and into nature for a few hours each day,weeks or months

RE:What is the use of gold

"seems we hang most of it around our necks" . If so, that is better than rope....

Re: What is the use of gold?

I can think of a couple of people today who could do well with some rope around their necks Aye!!

So is the 40% investment in the 10% used in industry or jewellery.
Jewellery seems to be a dead loss coz when you   go to sell it you are lucky to make spot price but generally it is less because most jewellery is bellow 24k.
People who sell their scrap jewellery and some not so scrap will only get the k weight value or less. If you have a few good nuggets then you stand to make a good profit to collectors if the nugget is attractive or unusual.

Investing in the 50% jewellery is not going to make you much profit even in the long term.
So investing in Bullion is likely the best way to go long term and especially if you buy and sell by the minute. Buy low and sell high on all of the ups and downs.
Doing that will give you profit and some big headaches tho.

what use is gold

I use the bit I have to remind me what real money looks like. It sits in vials on the top shelf of my desk. Would be nice to have a two three pound rock laced with gold for a change...maybe one of these days. The rock actually turned out to be a dud but the little guy is real...just so small 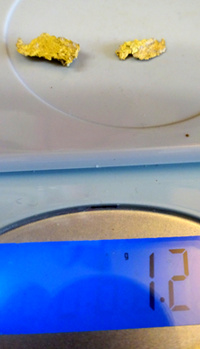