Gold Detecting and Prospecting Forum :: General :: All about Coils :: X-Coils

Finally feel confident enough, to give a rundown on the new aftermarket, 15X10 inch spiral wound coil from X-Coils, this one designed specifically for use on the Minelab GPZ 7000.
After visiting a couple of my old flogged haunts here in Vic, swinging the new 15X10 inch spiral wound elliptical coil, over ground covered by just about every detector coil combo in the past, I have come to the following conclusions.
Firstly, like its larger sibling (the well constructed & proven by now 17X12 inch spiral wound coil) the new 15X10 elliptical X-Coil, is one step closer to perfection.
It ground balances superbly over the ferite, running smoothly over most ground/type conditions, whilst offering great sensitivity as well as depth, on or over all/any type/size, buried in-ground target.
Although similar in sensitivity to that of a mono wound elliptical coil of the same in size, this 15X10 spiral wound coil, is a little more prone to the effects of EMI from nearby power-lines than its DD wound counterpart coil of similar size, (but no where near to the effects produced by a mono wound coil of similar dimensions) but that too, is to be expected.
The coil is well on par with the Minelab 14X13 inch coil, at times surpassing the 14X13 inch coil, on/over sub gram gold at depth, whilst offering great ground coverage.
Apart from its lighter weight factor (as compared to the standard 14X13 inch & being more elliptical in shape) is its ability to sneak/manoeuvre through tight sections of scrub, tussock grass & rocky covered ground with ease. It even comes close to chasing the depths of its 17X12 inch counterpart on/over larger positive in ground targets (say from half ounce & above).
Being elliptical in shape, Its ability to better zoom in on, or pinpoint out, smaller positive in-ground targets, is also a welcoming sight.
It were unfortunate that in the time I had up my sleeve testing the 15X10, didn't happen to ping on more colour than just that single bit of 0.62 gram, but I can't complain about the 6 inch depth it was found in & over soil, above average in mineralization.
I personally can see this 15X10 inch coil size, as being a general purpose favourite, for many a GPZ 7000 user.
Bellow are some pictures of one particular area that although has been well hammered in the past, has also managed to produce the odd bit of colour (ranging from 0.09 to 0.62 gram) both to the 15X10, as well as to the 10 inch round DD wound X-Coil, at depths ranging from 2 to 6 inches deep, with numerous lead shot & steel bits, some of which I did not include in my pictures. 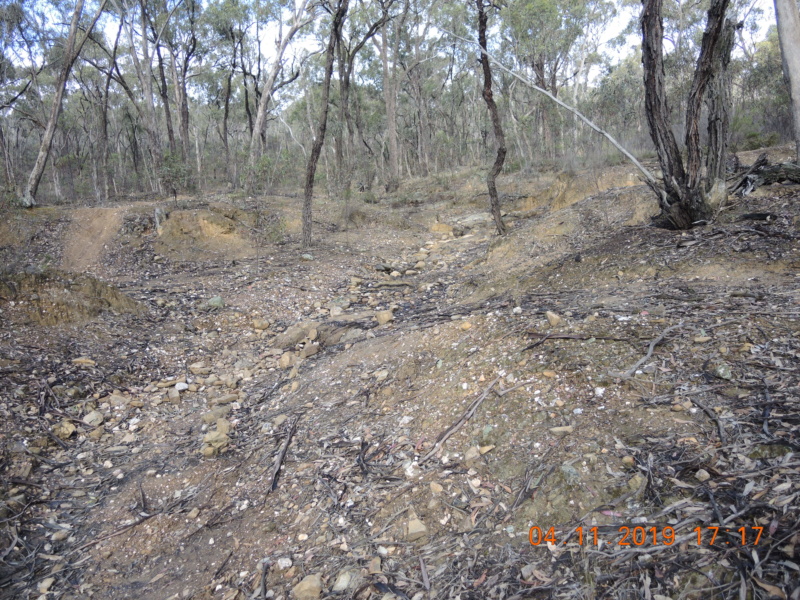 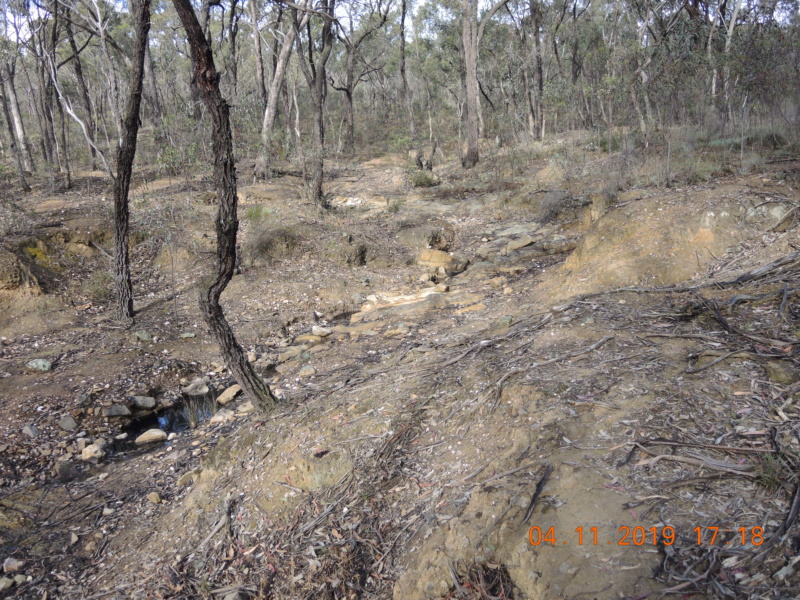 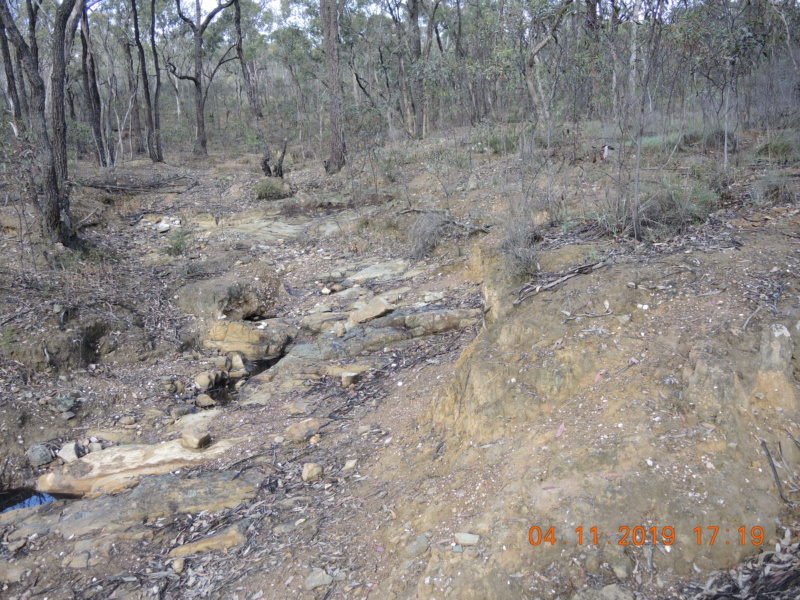 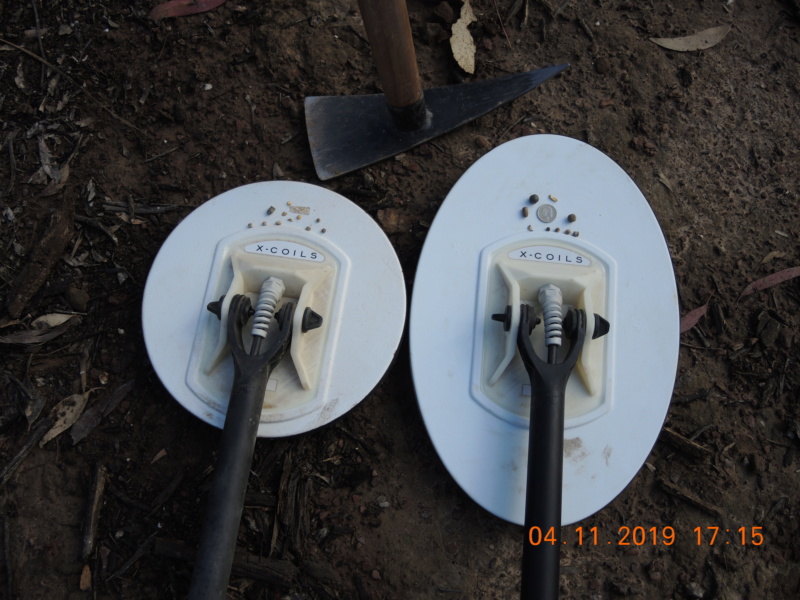 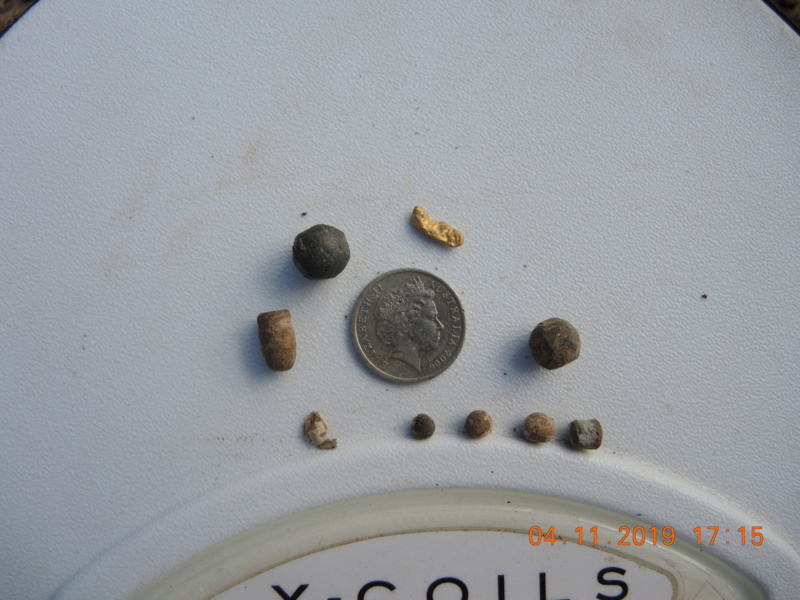 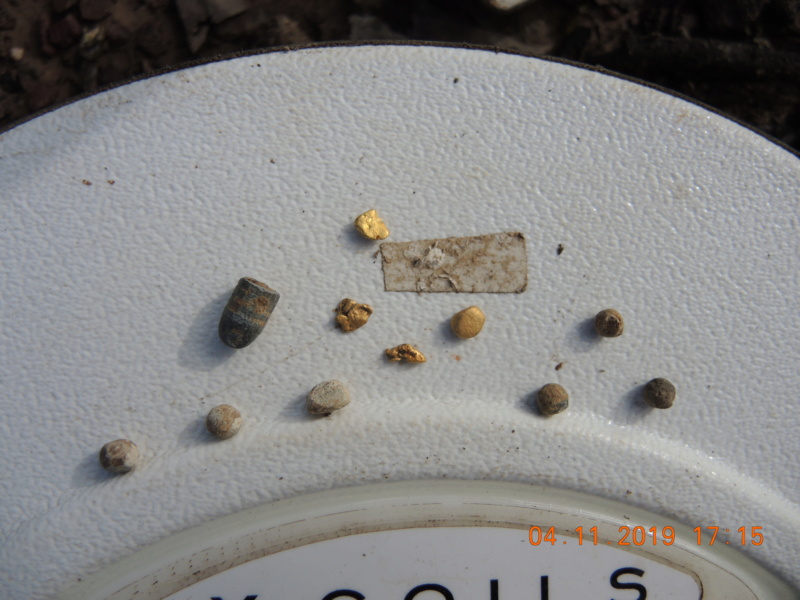 Good report Kon and pictures to go with the report as well, I think the 15x10 spiral X-Coil on the mighty GPZ7000 will be a great combo in many locations.

That's not to bad a looking pick either, I think I know who makes them.

Thanks Dave. As for that small pick in the picture I ordered off you a while back, what can I say. For a small size pick, Its that well made in proportion/dimensions, that I'm thinking of placing another order for one just as a spare.
BTW, I forgot to mention in my 15X10 inch X-Coil report, that the 15X10 spiral, as well as the 10 inch round DD, have the edge of exceeding/excelling, when run in High Yield/Difficult, than in General/Difficult, especially as ground conditions become hotter in mineralization. Keep in mind, I test them over ground flogged to death. I can't imagine what they're capable of, over suitable virgin ground conditions.  Either way both are very well made coils, knowing that one can use them out there with full confidence, in pursuit of the "Golden Ointment"

Last edited by Kon61gold on Tue Nov 12, 2019 7:31 pm; edited 1 time in total (Reason for editing : Meant to say Coils run slightly smoother/quieter when in High Yield/Difficult, than when in General/Difficult, as ground mineralization increases)

No, no Xmas coming and all that, certainly 15x10 tis bloody tempting

I know what you mean Norvic. I'ts a difficult one.
I now have one X-Coil for just about every situation.

They're getting better & better as time goes by & not just in looks, but in their working performance characteristics. Well done to the manufacturer of the X-Coils range.

Not wrong Kon, we`ve gone from a choice of two to a choice of plenty, with the varied sizes & shapes plus the obvious performance upgrade that has given us we are spoilt now. Up here in NQ the smaller coils in particular were much welcome this season with the heavy grass cover, amongst the rocks and in the narrow gullies it has been an Xtra magic season.

Hi Kon very interested in your post. I’m from Western Australia and have tried to find who sells the x coil to no avail, could you provide any info on where I can purchase these coils cheers Vic

VIC TAYLOR wrote:Hi Kon very interested in your post. I’m from Western Australia and have tried to find who sells the x coil to no avail, could you provide any info on where I can purchase these coils cheers Vic

I sell the X-Coils, I have used them in WA for about 4 months this year and a short time last year.

I can send you more info etc use my email golddiggerprospecting@dodo.com.au

I am in NSW now and I have some of the X-Coils in stock right now.

Hi Dave Thanks for your reply I've sent you an email, and will look forward to the info you send cheers Vic Taylor

You are really tempting me. Would I be right in saying the 17x12x would outdo the 14x13ml in all ways?

Lets not get ahead of ourselves here Rockwall, for the answer to your question is NO. The Minelab Super D might be a type of DD wound coil & would be a little less sensitive than a spiral wound of similar dimensions, but will be more than on par with the 17X12 spiral, on gold the size of half gram & bellow, at times even surpassing the 17X12 inch spiral on that size/type gold mentioned. Where the 17X12 excels on/over the Minelab 14X13, is on gold say (roughly) the 10 gram mark & above.
One thing I must state on here & something I have noticed using the spiral wound as compared to DD wound, is that although a spiral wound coil (as compared to a DD wound of similar dimensions) clearly shows an increase, over just about all on ground targets in an air test, never underestimate the raw in ground penetrating power, being transmitted/received from a DD configuration especially as ground goes from average to high in mineralization.
I say this because I have (& on more than one occasion in the past) witnessed greater depth on/over undisturbed in-ground gold nuggets, by the use of a DD wound coil, as soil mineralization increases from that of average to high, than what is shown even in an air test.
Now these are only my personal conclusions/finds over the years & although some might disagree, are not meant to open up the wrong type of controversy, for as most of us here know there are many tweaks/perks one can use on a GPX series detector to run a mono coil smoothly/quietly over any type ground, but one must consider where would be the advantage of dumbing down a mono coil, to the point where it handles the section of highly mineralized ground quiet & smooth running, but at almost half the depth it would normally have over the same size/type, in ground target, in low to mild ground mineralization?
As Joe has said & I already stated in my 15X10 inch X-Coil report, the 15X10 is closely chasing its bigger brother the 17X12 spiral, beating the 17X12 on the sub gram gold, but being surpassed by the 17X12 on again, say the 10 gram size gold & above.
I know I'm sounding like a salesman on here, but am far from one. I'ts the lighter weight factor, coupled to the superb manoeuvrability through & between many a tight narrow spaced obstacle, that give preference to using the 15X10, than its competent, but larger in size 17X12 inch brother.

Thanks for the comprehensive answer.

I know the 17x12 spiral coil on my 7000 has performed near miracles in WA this last winter, and I also gave the 15x10 spiral x-coil a good go on the 7000 on the weekend also, it is a recent addition, it ran like a dream, balanced perfectly to the ferrite (x balance) and perfectly the (G balance) normal ground balance, I run in semi auto GB

The settings on the 7000 were Difficult/ High Yield, sensitivity 16, threshold 27, threshold pitch 30, audio smoothing high, semi auto GB, ground smoothing Off, both volume limit and volume about 10 and 12, noise cancel where it ran best was about 111 on the day, this was the settings for all the x-coils I used on the weekend.

The country I work in Dave. Couldn't figure out how to put photos on a pm. Hope this works.

Rockwall wrote:The country I work in Dave. Couldn't figure out how to put photos on a pm. Hope this works.

No the picture is not there,I will PM you my email address and send it via that.

Had a 15x10 X coil for awhile now, and it has proved to be my general go to coil, replacing the 12X round spiral. Kon started this thread with his review, which says it all. I`d just like to add that in our FNQ grassy gold fields that elliptical coil narrow front makes keeping the coil on the ground allowing you to push through grass a wee easier, linear coil detecting.... no way can you swing side to side, but it works and gets the heavy stuff. Cuts down on the area one needs to brush cut, finding those indicator nuggets to give an idea of the nugget run down the slope. Oh to be able to swing a big coil unhindered but until those days the 15x10 X coils the go. 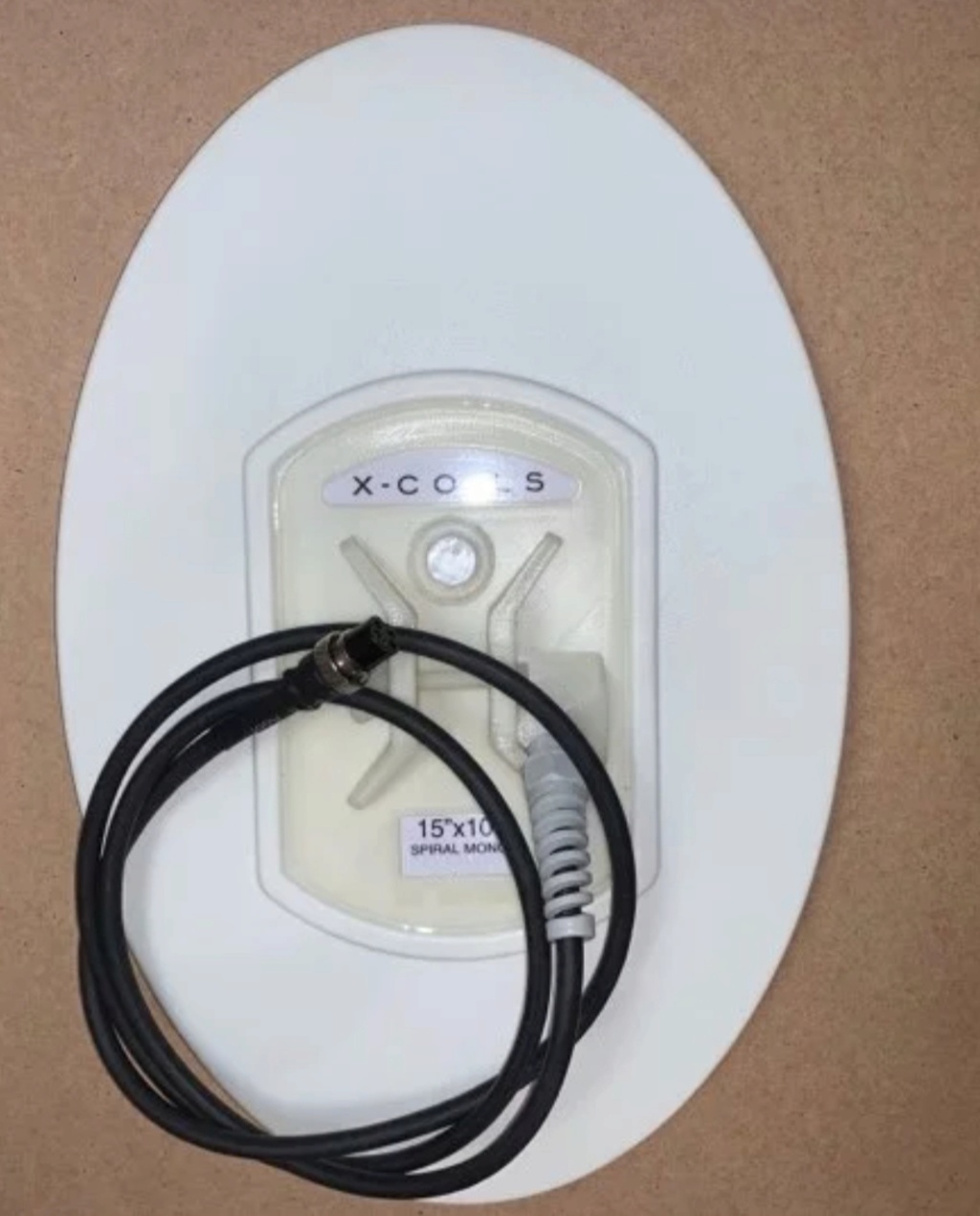 Can the new member that is calling themselves X-COILS make it clear who they are, I see they are from Russia which is fine, but it would be good to know if they are just using the x-coils or are promoting the x-coils to sell.

Gold Detecting and Prospecting Forum :: General :: All about Coils :: X-Coils