Thought the below link may be of interest, I have read previously about Melbourne CBD being a divided city on either side of Elizabeth Street which I think was an open sewer(?)  What is absolutely fascinating is the notion that many owners were told and forced to bury their houses just to get things level across town...  One guy writes the following petition to council with reference to his hard luck on the goldfields:

To the Worshipful the Mayor of Melbourne and Councilors of the City of Melbourne.
“The petition of Richard Hill, Franklyn Street, North Melbourne. That by the improvements now being made at Franklyn Street your petitioners house will be almost buried, the earth being raised as high as the roof. That your petitioner has been very unfortunate in his Labor at the Goldfields, and has now no further means ... That your petitioner therefore prays that the corporation will charitably direct that the earthwork may be done by your Officers, and save the petitioner from ruin ...”
Letter dated 1856. The petition was later marked 'granted'.

I love the old photos, and the contour map which illustrates the issue of drainage etc.

Can you imagine what must be buried under those city blocks? It would be great if the State Gov't could fund an archaeological dig or two to uncover some of that lost history.

The landscape of the CBD back then would've been amazing to see,compared to how we know it today.

Robyn Annear is a great writer..This is a fantastic read if you can get your hands on a copy 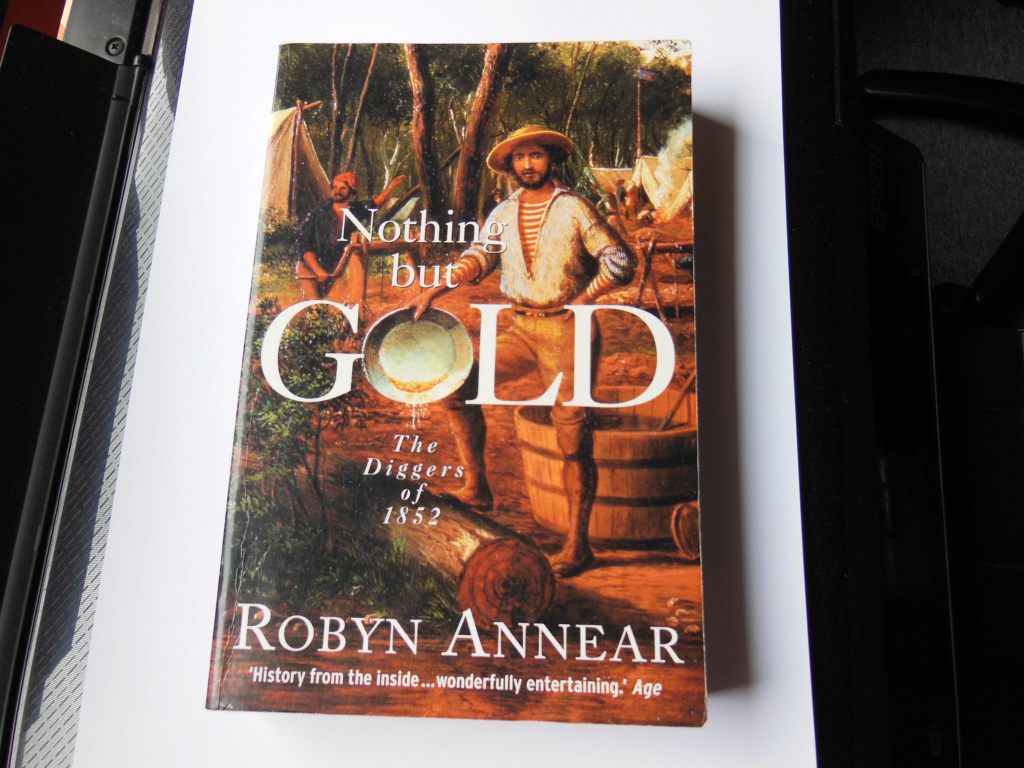 Sharkbait you can buy that book right now on Ebay ranging from $27 + to $40+ dollars. I just ordered mine.
wombat

Prior to the discovery of gold , Melbourne was nothing more than  sewer.

By the end of 1852, 90,000 newcomers had flocked to Victoria in search of gold. Provincial cities like Ballarat and Bendigo grew, bringing railways, roads, libraries, theatres, art galleries and stock exchanges.

In the 1850s the heaviest traffic in Australia was on the gold road from Melbourne to Bendigo, and by the 1880s Melbourne was christened 'Marvellous Melbourne' – one of the world's biggest, booming and cosmopolitan cities of the era.

If it was not for the discovery of gold in Vic and the financial benefits it brought to Melb and Aust, I wonder if the city would have survived.
If not for the discovery of gold it is likely that  the Greens party would not exist and solar and wind electricity generators would not exist. Without gold the mining  of iron, copper , silver would have been delayed for many years. No matter how much the environmentalists  bellyache about mining the simple fact is that they and the rest of us would not have ships, boats, planes n trains n 4 x 4s and electricity, washing machines, tvs, radios, and just about everything else that we take for granted these days.

So! Melbourne may have started out as a swampy cespool but look what mining has done for it and all of the cities and towns in Australia.

Another good book containing some interesting insights of Mark Twain's trip to Australia including Melbourne, regional towns and goldfields. I was lucky to have found a hardback version (I read elsewhere about a comment Mark Twain made when he saw Maryborough Railway Station and how it would fit all the towns folk in this one huge building): 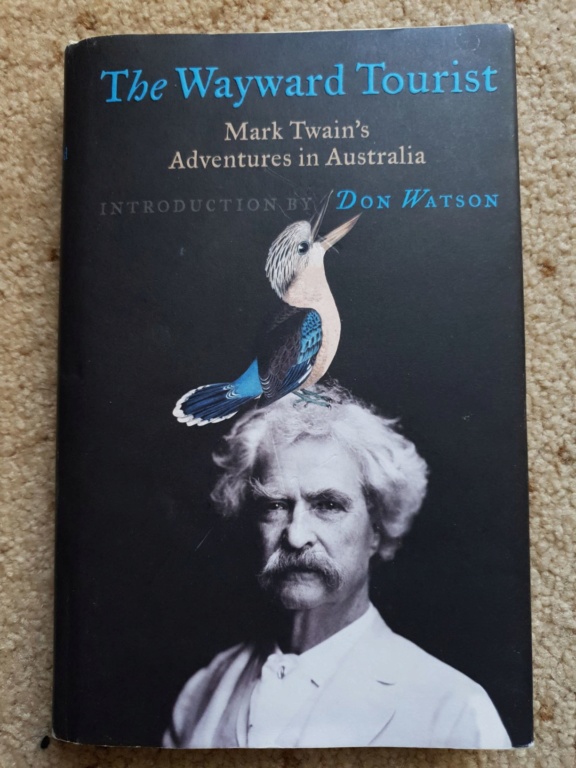 Wombat wrote:Sharkbait you can buy that book right now on Ebay ranging from $27 + to $40+ dollars. I just ordered mine.
wombat

Thanks Wombat,had my copy for a couple of years now..was lucky enough to find it at the Carisbrook market

"Mark Twain" (meaning "Mark number two") was a Mississippi River term: the second mark on the line that measured depth indicating two fathoms, or twelve feet—safe depth for the steamboat. In 1857, at the age of twenty-one, he became a "cub" steamboat pilot.
I wonder what his birth name was?

Another good book to read is "Send the Boy to Sea" The factual account of the life of a troublesome boy, sent to sea at the age of 14 in 1851, and his experiences while sailing on convict ships between England and Australia. Also his love of Australia which led him to the Victorian goldfields, and finally to Maitland NSW where he settled.This is more of his own diary accounts. Book by James Montagu Smith,
He spend a lot of time through the goldfields of Victoria. At one stage ends up in Maryborough. His exploits are before the Eureka Rebellion of 1854
wombat

adrian ss wrote: "Mark Twain" (meaning "Mark number two") was a Mississippi River term: the second mark on the line that measured depth indicating  two fathoms, or twelve feet—safe depth for the steamboat. In 1857, at the age of twenty-one, he became a "cub" steamboat pilot.
I wonder what his birth name was?

Early Australia is fascinating. I have read many books on the first 100 years of our country and been educated on our early history.

Our only claim to historic fame is Mary Reiby. I researched this remarkable woman when doing our family history. See below.

The first member of our family to immigrate to Australia was Charles Foster who arrived in 1818 with his wife Elizabeth (nee Haydock). They had been married in 1794 and had a grown-up family in England, including a son, Thomas. He was married and, in 1820 a son, Charles, was born.

Charles and Elizabeth had come to Australia on the advice of her sister, Mary Reiby, a former convict, but in 1818 a prominent businesswoman with property in Sydney and Van Dieman’s Land (Tasmania).

Mary Reiby is present in every twenty dollar note which is published from the Reserve Bank of Australia. Mary Haydock was a mere girl of thirteen when she was transported to Australia. She was shifted to this remote land for stealing horses as Australia was a penal colony at that time. Mary had a phenomenal rise from this humble past and became one of the most famous Australians. After her marriage in 1794 her maiden name was changed from Haydock to Reiby. She was the biggest entrepreneur of that period in Australia and contributed a lot in the process of building the nation.
Today, Mary Reiby is also remembered with her name being applied to Reiby Place in Sydney and the Reiby Institute, also in Sydney. So you see we descended from a horse thief

Another book I found invaluable in understanding Aborigines was the book written by William Buckly ( of Buckley's Chance fame )who lived with the Aborigines for 26 years around Port Philip Bay before there were any other white folk around. there. I must caution that you choose the original book by William Buckley not the many others that try to denigrate the man.

Although none of the above has any bearing on gold I did have one ancestor who jumped ship in Melbourne and went to the diggings. Unfortunately he didn't do to well but must have made a bit of money as he ended up a farmer.

I have also read several of Mark Twain's books and love his style of writing. A Tramp Abroad is worth a couple of hours reading following him in his travels around the world.

History is not the dry as dust stuff that many people believe it to be.

Without history we would still think the earth is flat floating in space on a turtles back.
We would be air headed nomads drifting in time and going nowhere.
But fortunately we can trace our history all the way back to Cro magnon man and beyond at which time we were very advanced compared to many other races.
What caused the differences between the dullard muscle bound Neanderthal and Cro-Magnon man?
Cro magnon and the Neanderthals diverged from each other around 800,000 years ago after which one group remained as thick as bricks while the Cro's advanced culturally and mentally to what we are today.
The Neanderthals sometimes ate the brains of the Cro mag in an attempt to get some of their smarts but that did not work all that well.

https://cheddarroadallstars.bandcamp.com/track/gunny-thomas
spoken history by Barry dickens ,he recalled this as a 8 year old selling papers in melb circa 1950's,nothing to do with gold but pretty cool stuff