My biggest bit yet with the sdc2300

Hi Jen
Congrats on the gold speci.
There seems to be a bit of confusion on the forum re calculating the amount of gold in qtz.
Do This:
Weigh speci dry in air accurate to at least two decimal places.
Then place your container of water on the scale and tare the scale then suspend the specie by cotton in the water without the specie touching the container.

The figure obtained is the "Loss Of Weight " of the speci. Divide this figure into the weight in air and multiply this by the sg of clean distilled water at 20 degC and the result is the SG of the speci. For our rough purposes assume the sg of water to be 1.
If your speci is mostly qtz matrix then use this table to calculate the % gold in the qtz then multiply the dry weight by this percent and the result is the gold weight in the qtz. Result is approximate only. ....(It is a percentage so remember to divide the result by 100).

Gday. Kon61 was very close and I believe Adrian that your on the money too. Now for my question do we calculate for different types of rock being attached to gold. Does it make much difference in outcome ?.
Regards big fella

It can make a significant difference if the surrounding matrix is sandstone,Latterite, ironstone etc that has different sgs to qtz.
Using the sg of qtz will very often get you into the ball park.
See this list of various mineral specific gravity.
The accuracy of the determined sg of the rock surrounding the gold is very important when determining the weight of very small amounts of gold in the rock.
https://www.911metallurgist.com/blog/list-table-of-specific-gravity-of-minerals

Thankyou all for your replys

I was all for just smashing it in a dolly pot. Glad i was talked out of it

One never knows whats hiding within
So amazed what that ugly quartz was hiding.

That cleaned up very nicely, a fantastic piece.

Jen wrote:Well here it is.
Wow! Now it’s beautiful... prickly. But oh so nice now it’s out of its host rock

There was some really fine gold as well. That I didn’t place on these scales
All up it weighed 63.3 grams. 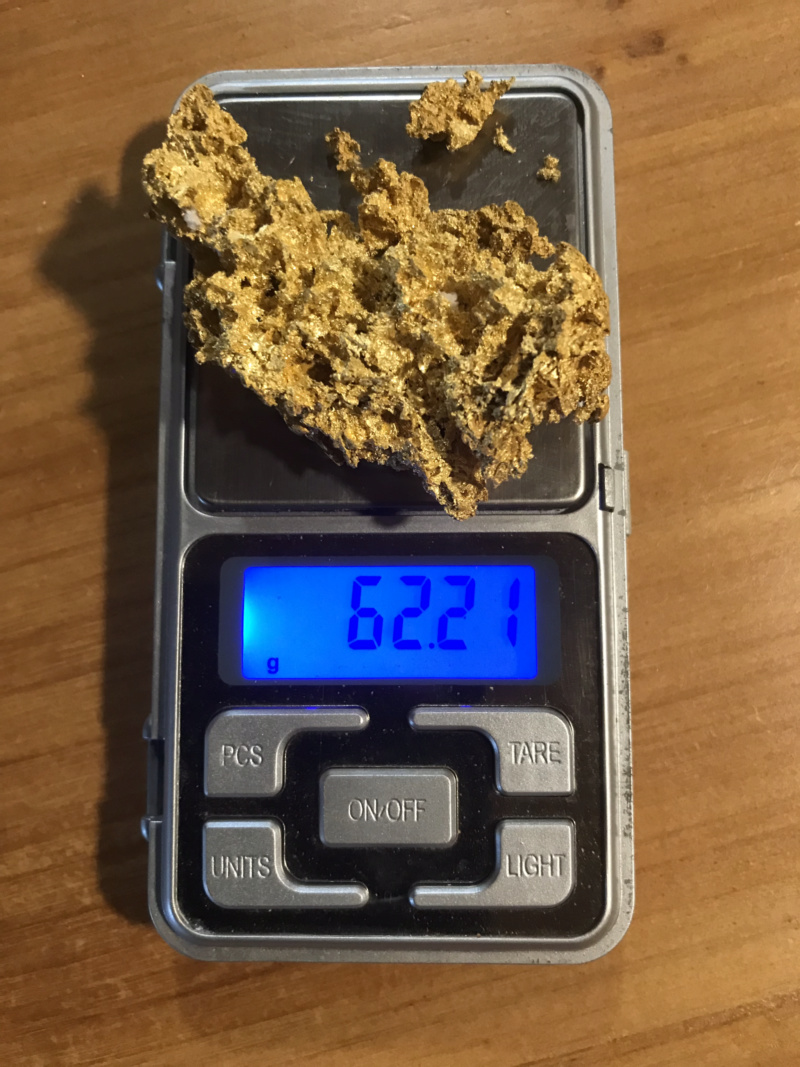 Wowzers Jen that is fantastic. No wonder the 23 got it at 15 inches.

It sure did come up nice. The photo doesn’t do it justice

My apologies for the late response to your question there Big Fella.
Adrian pretty much summed it up nicely. To accurately separate & determine the specific gravity of all/any individual foreign matter, mixed in with, or attached to the quartz, would require some serious scientific laboratory work, which for us detector/prospectors would be a little to far fetched. Leave that one for the egg heads to figure out.

What you want to know is how does one get close enough to working out the amount of gold in quartz.
When calculating for the amount of gold quantity in quartz, most tend to go by the average specific gravity of quartz, 2.63 (an average in between figure). Quartz's specific gravity (SG) falls mostly between 2.60 to 2.7. I'v played around in the past with many a different specific gravity of quartz figures, when trying to calculate what best SG of quartz figure to use, in order to be dead on the amount of gold content, contained within any mixture of quartz type/gold specimen, only to fall short on my findings.
I eventually settled on what I believe, would be a close enough safe bet, without going overboard in gold content, by using a specific quartz gravity figure of 2.67 instead of 2.63, (allowing for the extra weight of other foreign minerals).
This formula by no means is the do all end all, but one can safely bet that in a speci of many ounces, one would be close enough to the actual real gold content held within that specimen, than being 20/30% off.

The formula used is this

Gday Thanks for replies. I still think I'll look at my species and say nice and try to find nuggets

Thanks again as it is a question that comes up around many a camp fire.
Regards big fella

It sure surprised me to see it go from an ugly “rock” to what it is now.
I am sooooo glad a few talked me out of placing it into a dolly pot

Glad to hear your still alive and kicking.

Go on Jen, smash it! You never know there might be a beautiful crystal piece of quartz inside it.

Seriously though, that is one impressive nugget Jen, and I am so happy for you, (it's brightened up all our days), Harry

A very belated congrats Jen. I'm not sure how I hadn't seen this post previously but gees what a great find and what a great looking bit of gold after cleaning. More???

Hey Jen..... when you say that "hard caprock" agre you meaning that tough layer over the top of deep rocky, stony, gravely old river delta's? There is some of this around Elaine and I often wonder whether it could contain gold although commonsense tells an the gold would be on the lowest layer and not in the capstone conglomerates.

the hill folk wrote:Hey Jen..... when you say that "hard caprock" agre you meaning that tough layer over the top of deep rocky, stony, gravely old river delta's?  There is some of this around Elaine and I often wonder whether it could contain gold although commonsense tells an the gold would be on the lowest layer and not in the capstone conglomerates.

Well i am no geologist
All i know is its different in W.A

He found the renowned Goanna Patch, WA on the theory that gold lay below the cap rock. The locals told him he had rocks in his head. Reluctantly the bank loaned him $1000.00 to hire an excavator from Leinster to dig a costean which exposed a glory hole. (David passed away only a few years ago on his Goanna Patch)

I am so glad you dd not crush it Jen - two ounces wow that is amazing hope you keep it safely away. Well done Ian

Willo wrote:I am so glad you dd not crush it Jen - two ounces wow that is amazing hope you keep it safely away. Well done Ian

Yep, its packed away.   Somewhere

Sorry if i didnt answer some of you.  Appreciate all your great reply’s

Now we shall what this years W.A season may give us.