Went out on the week end to a locality in the Golden Triangle for a bit of detecting. Prior to heading out I researched the spot on GeoVIC which showed up no active mining leases and the spot was shown to be Crown Land. On arriving at the spot I found that the area was fenced off and the track I intended to go down was barricaded with a sign “keep out, trespassers will be reported to police”. To the side of the track was a rusted out sign signifying that there was mining activity in the area followed by a bunch of legal jargon. Looking at the sign it looked like it had been there for a very long time and the fence was a simple farm fence rusted out an in places lying on the ground i.e. in poor state of repair. I had done a bit of homework on this spot so I was a bit miffed that all my good planning had gone to waste. On returning home I had a further look on GeoVIC and found that the area had indeed been covered by a mining lease which had expired over 10 years ago. Questions for all you more experienced prospectors:

Is this arrangement normal or could it be that the expired lease holder has never got around to taking the signs down?

Should I get onto D. of P.I . and get some clarification regarding to access to the area?

Could it be that perhaps Geovic is not up to date and that the parcel of land, quite a few acres, was sold, how could I find out the status of that land?

Or, could it be that some one is trying to keep people out without the legal right to do so?

How fresh are the fences are they in dis repair, because ive found that in the early days there was land that was owned in the past or leased from the gov that has been fenced off but is now state forest, so those forest will still be fenced albet near fallen down and may appear as private property, but were only crown land that was leased from anywhere from 20-100 years ago, if the post are rotten and have fallen down and the wire is rusted to the dung house, id say its an abandoned sheep run or pastoral lease but after that to be sure you could print out a copy of the geovic page and take it to the dse/dpi but they may not know if their arse was on fire every time ive asked them somthing on the phone they whine its not thier house and to call the other mob, ive been on the phone to all the mobs in Vic and they just kick the can, they dont even know what forest is their responsability, if they dont know how the hell is the humble prospector to know.

Hi Adrian, Absolutely you should check it out! I have come across areas like that before that have sported signs warning of all sorts of dire consequences that belonged to expired leases & simply had not been removed & the areas were ok to prospect in. If that's the case then they may have done you a favor by keeping people away & there may be a few bits waiting in there for you 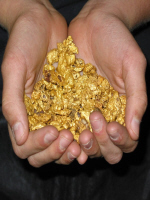 Hi, what I would do is copy all the documents of the particular area showing the current status from the dept and go for my life if anyone challenges you show the copies and challenge them (nicely of course).

I have done just that recently jacktar ! wasn't a thing the landowner,of adjoining property could do about it, i got a wry smile from him as he almost threw the papers at me grin ahh well there's no harm in being wrong sometimes

Good on you, hope you had some luck, research research and more reseach is definitely the key. I'm in QLD where would I get hold of these ozi-explorer maps? travel section of a bookshop? I'm off to the DME on friday for some maps of the old sites around the Warwick area, anyway happy hunting.

Jacktar do you have Oziexplorer? I can send you some good maps, PM your details to me.