Here is some very General Information on the Albion Reef Area 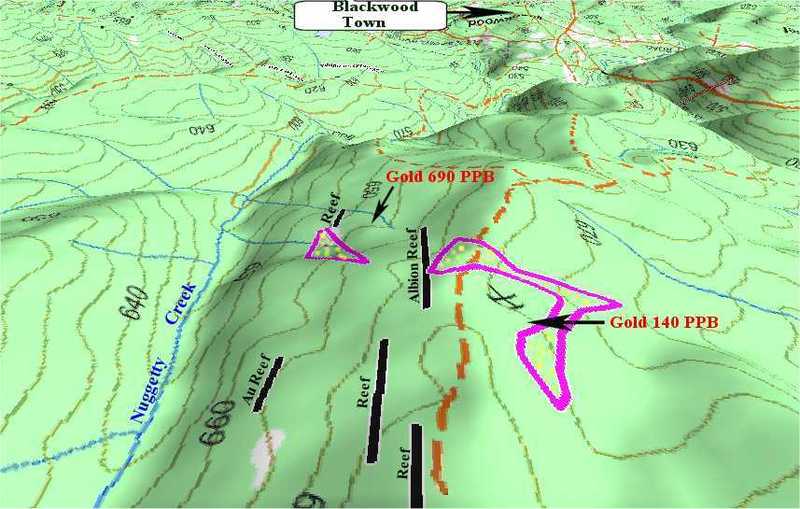 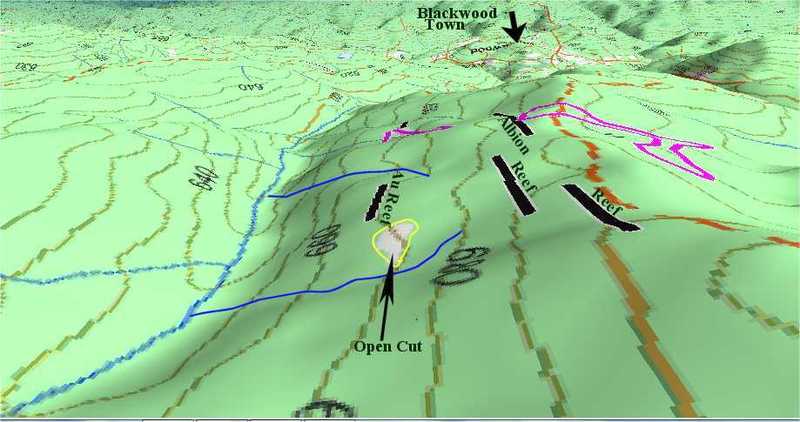 This is why you should never thing that areas that have little said about it is not worth a look, On the west side of Albion Reef there has been a control burn and it is very easy to see just how much work has been down off the reef line, the area closest to the reef has been surfaced to a depth of only 1 to 2 feet and further down the it has had a good was down with lots of larger rocks and Quartz's about 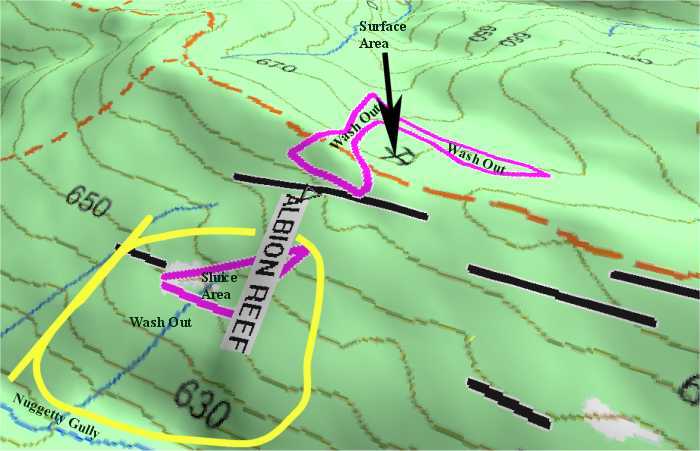 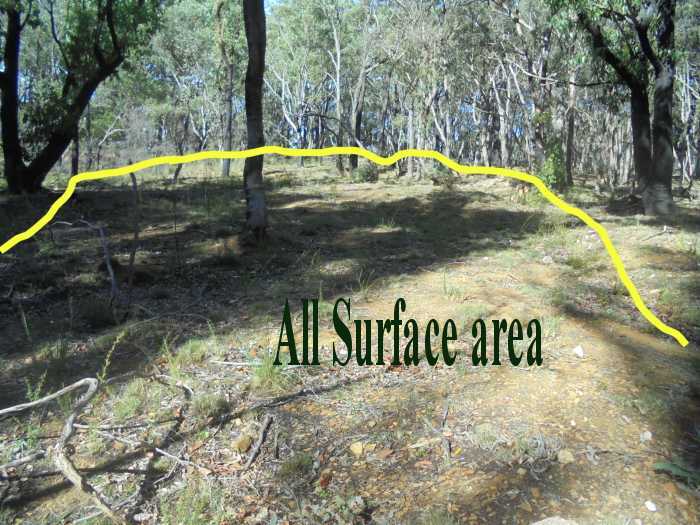 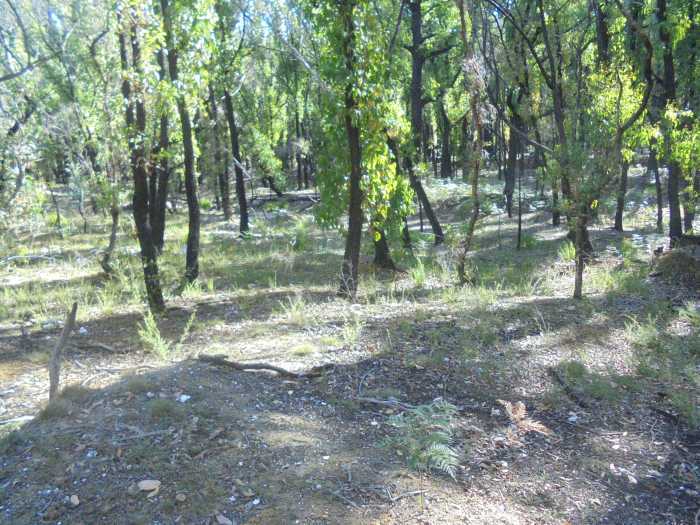 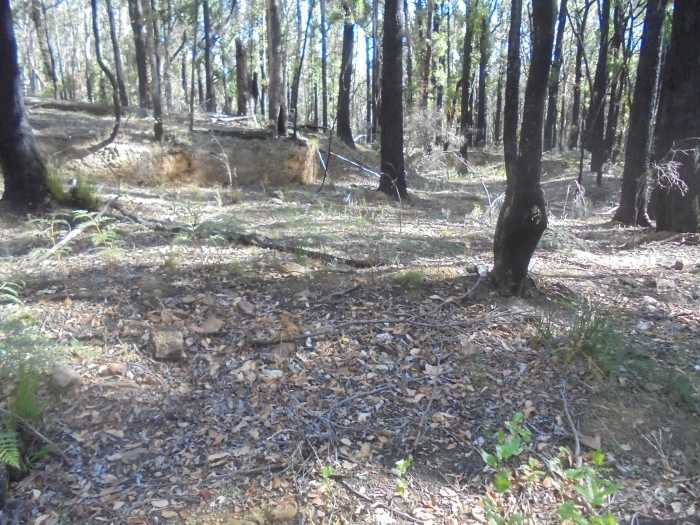 Further down much deeper wash 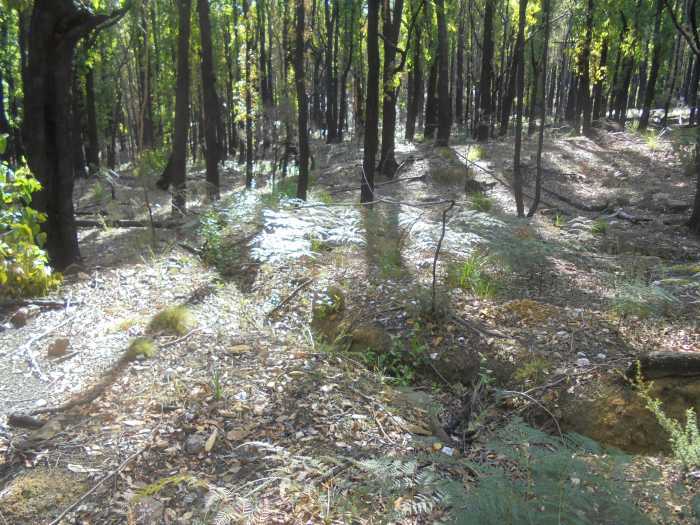 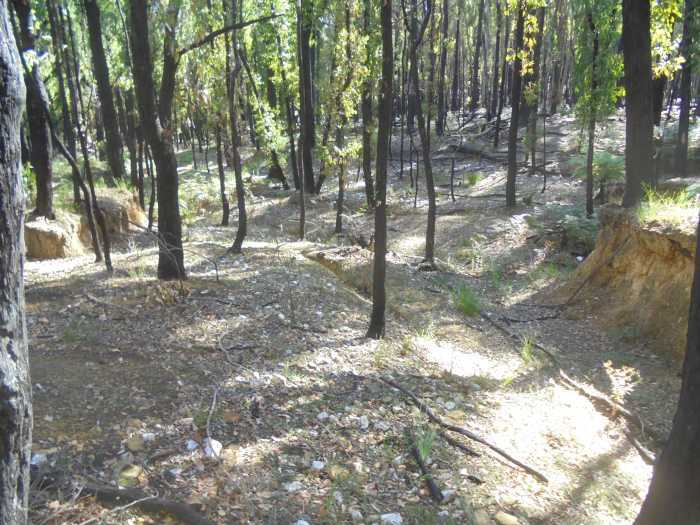 Laying in the bed of the deeper washed area's 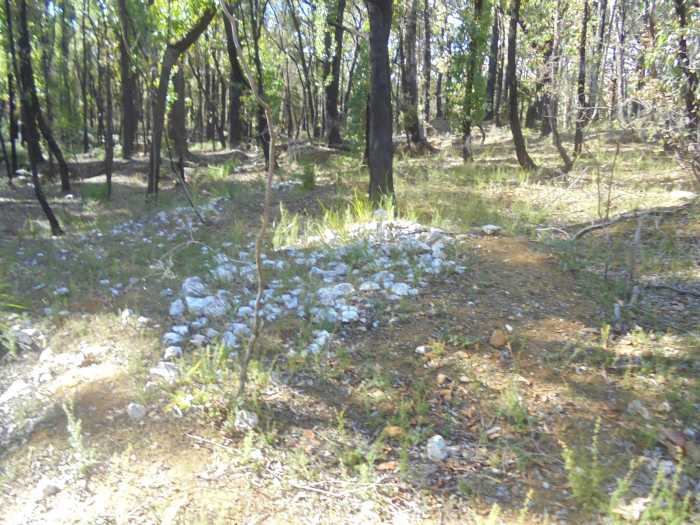 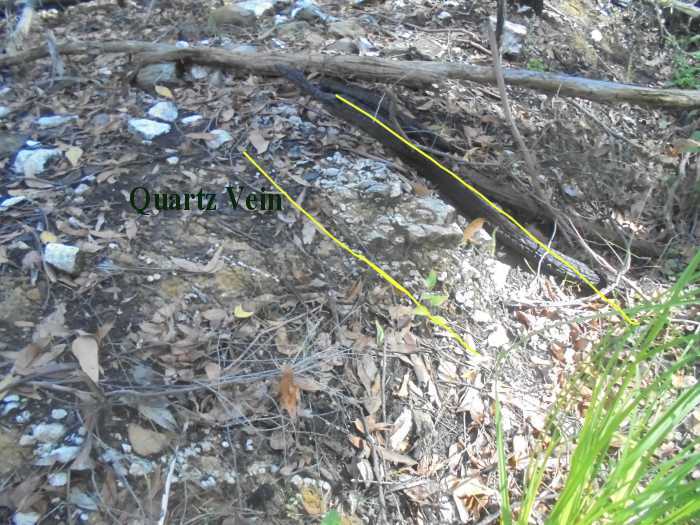 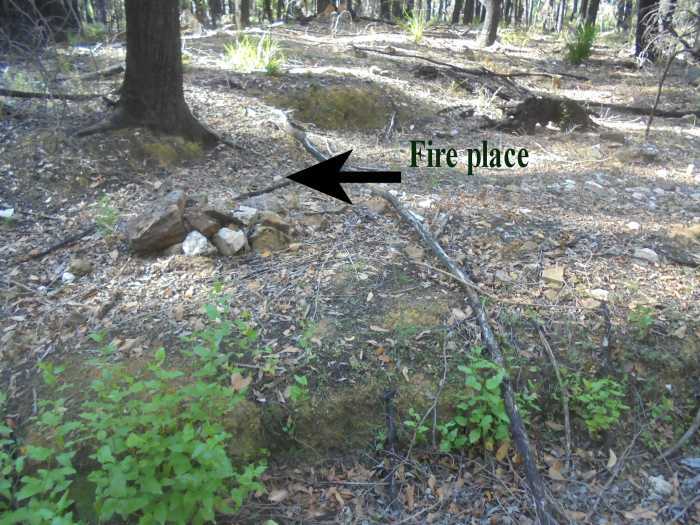 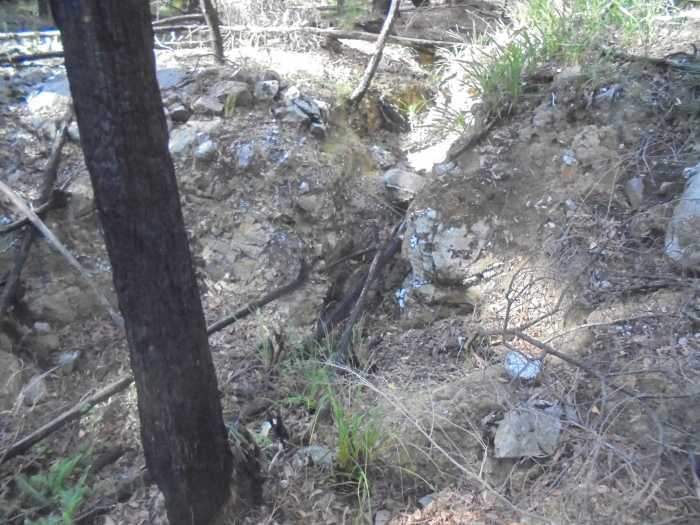 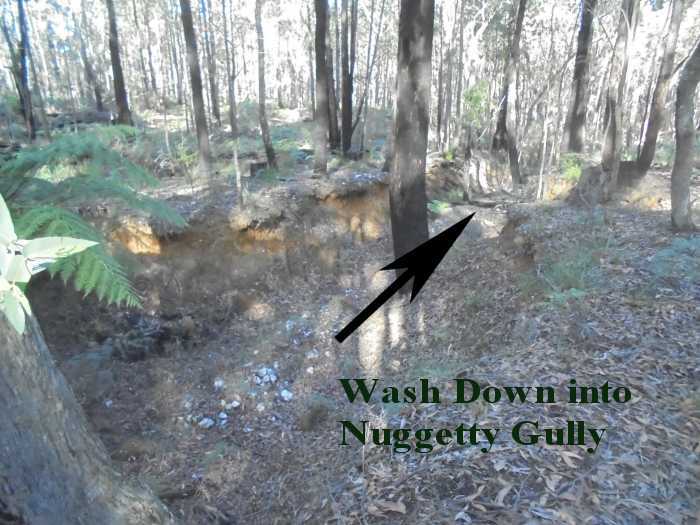 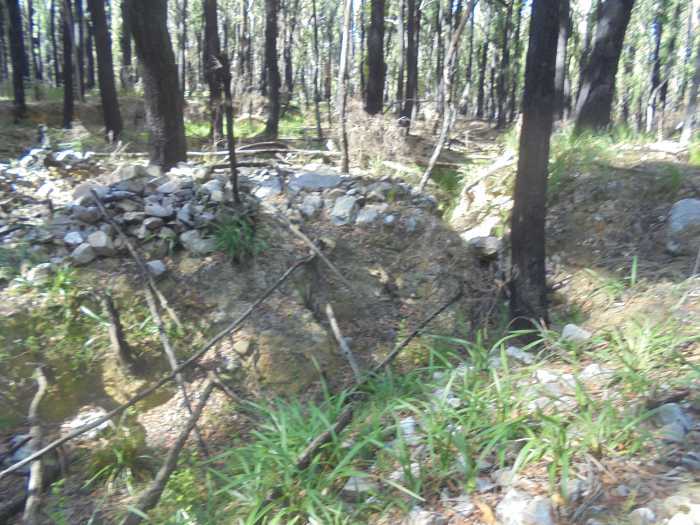 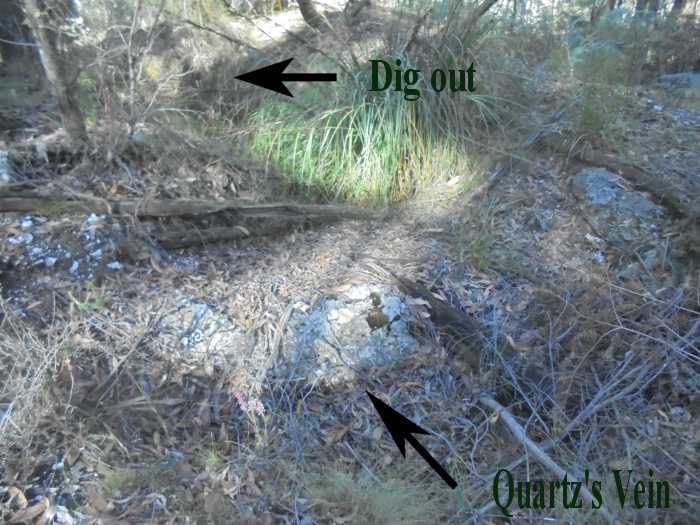 Here are the Video and should give you a lot better view on the Washed out areas.

I love research and best of all to head out and see it all for yourself at how hard they worked back then for a bit gold yes it might be abit over grown in some places but that good to me as it just means less would of bothered to try there luck.

Nuggetty creek is thick in parts you don't need much room to pan or run a small sluice.

On the Long Gully side were the surface and wash has taken place would still be a good place to start, still no water about but he is a Idea for you with all the ruts in the ground there now from the old times washing down why not form your own small dam with the mud and stone about that way the rain is coming you should bank up some water for a pan sample or a sluice from one to another. 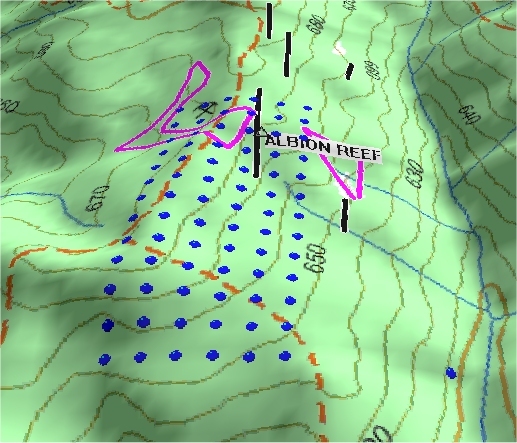 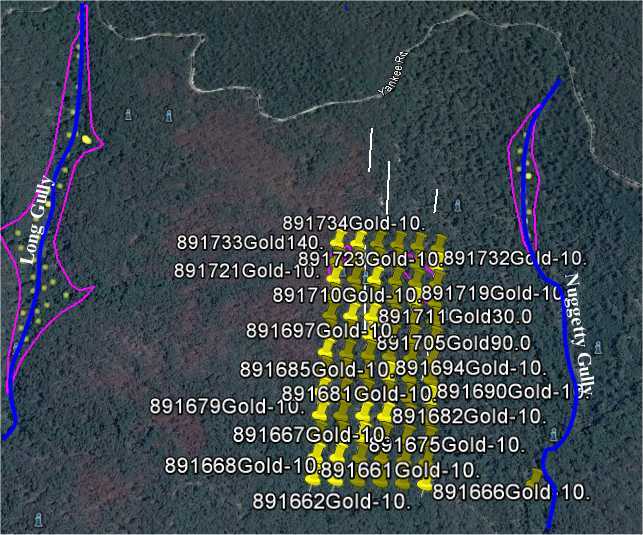 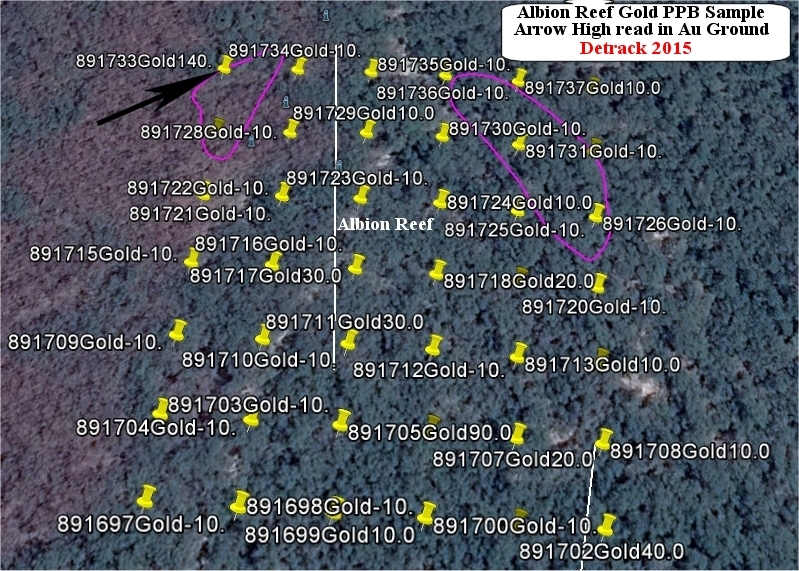 Just think we have a reef on the cap of the ridge and on the west side and only 20 feet from the reef line they surfaced and lower down they wash every deep that got to tell you the gold was not very far off the reef at all and yet if you look at my vid and photos you will see Quartz piles about roll You just got to ask yourself if the gold was in the Auriferous quartz's then that would made the soil Alluvium and Auriferous gravel then the Quartz's pile about should have some gold within it would you not think so smile( I know what you are thinking you just got to know) I would think to take a few buckets home and put them through the crusher. 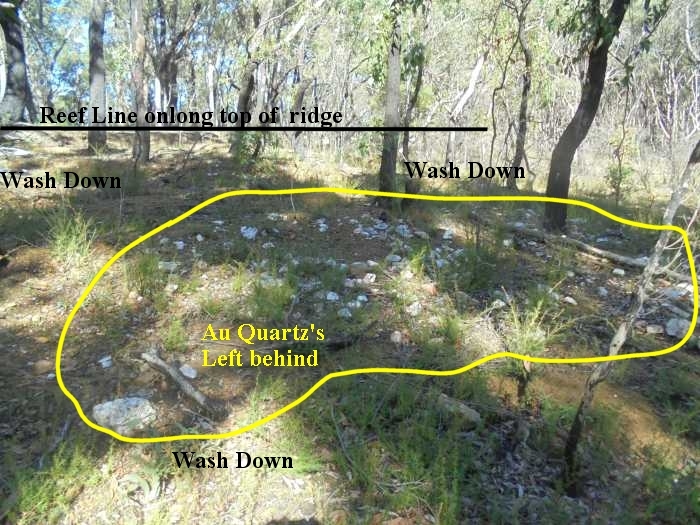 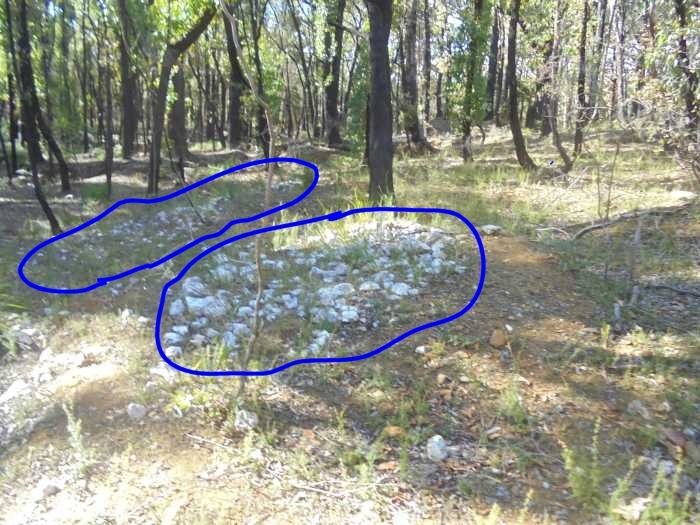 We know all about Albion reef and the surface work around it but never forget about other Geofeature's that are about just look at the other Reefs you see in the area, I mean the 5 that are on the raise to the south if you look you can see that they dive down into the surface-wash area and on one of my photos I show you that they have washed down to it.

Yet little work has been done on any of those reefs, it would still be worth a look from the surface area back up to the reefs and even down the slope from them would you not think so? 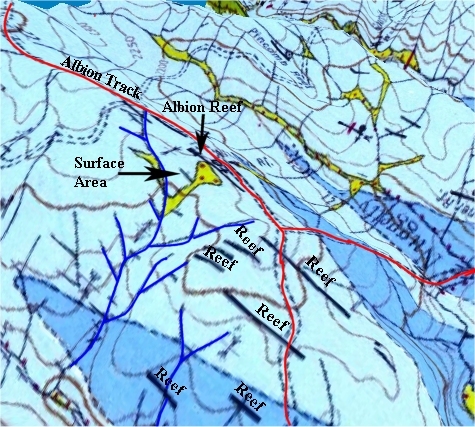 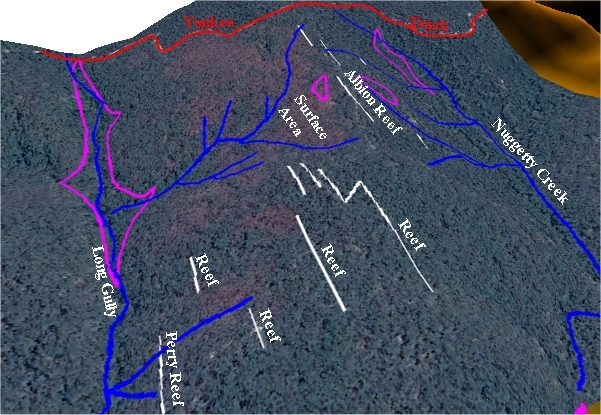 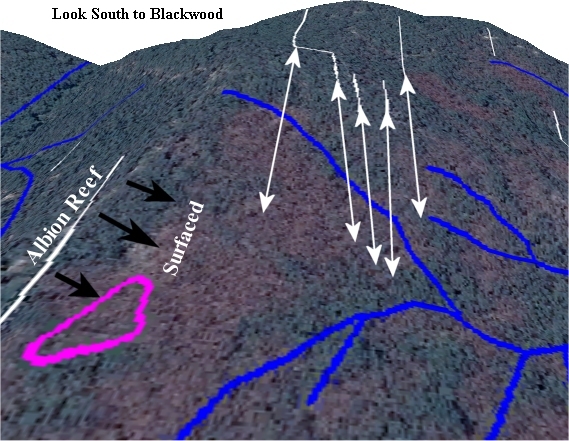 Were is it you say? 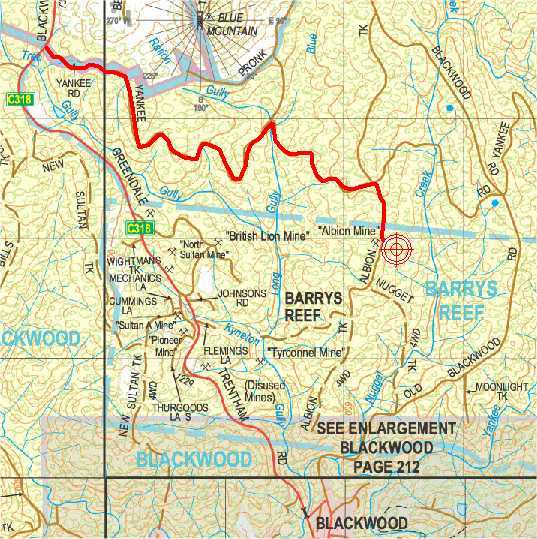 Look a Gully with my name

Now who is at home scratching there head and thinking we should I look next, why not try this spot ops 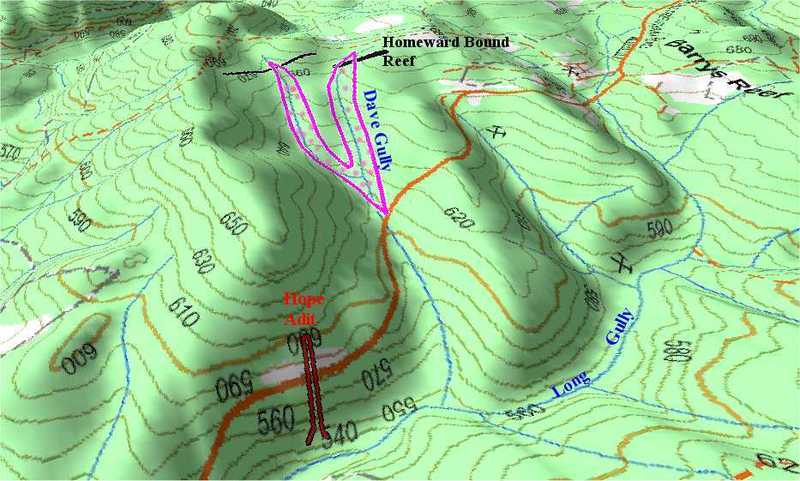 HOMEWARD BOUND AND 8 AND 2 MINES.
This reef is on the Sultan belt, about half a mile south of the creek, which flows through Barry's Reef township. It is not being worked at present. but was partly worked in 1869. Highly payable auriferous quartz was obtained,

The reef in the old surface workings appears to have had a strike of N.. to deg. W., with an easterly underlie. The strata strike in one place N. and S.; in another working, N. 8 deg. W. ; they are grey and blue slates and sandstones. A mass of leaders has apparently been worked to a width of zo feet. In places there are large excavations on the surface, and it is said that ore was taken out for an average width of to feet, and yielded a return of 3 or 4 dwts, of gold to the tan. Some very rich patches have been obtained. - It is stated that Messrs. Mackay and Stephens secured two buckets of stone which yielded
ozs. of gold. ,
Considerable faulting appears to have occurred along the lode at the surface workings. This has probably affected the dip of the strata. In a thick sand¬stone bed flat quartz occurrences have been worked; the strata on either side of this bed dip easterly at 6o deg., and westerly at 65 deg.
The workings are situated where the strata have an opposite dip, but it was not established that they are locate.l. in a fold of the rock layers.
At a depth of 7o feet, 447 ozs. of gold were, it is stated, obtained by the Homeward Bound and the 8 and 2 companies.
At the southern end of the workings the reef is cut off by a cross-course filled by a dyke 4 feet thick. The 'dyke is nearly vertical, and is now in the condition of a soft white clay. Across the cross-course, to the south, there are limited workings on the line of the lode. It was not ascertained whether the cross-course faulted the lode vertically, or to the east or west.

With readings like this you would have to get some good pan results. 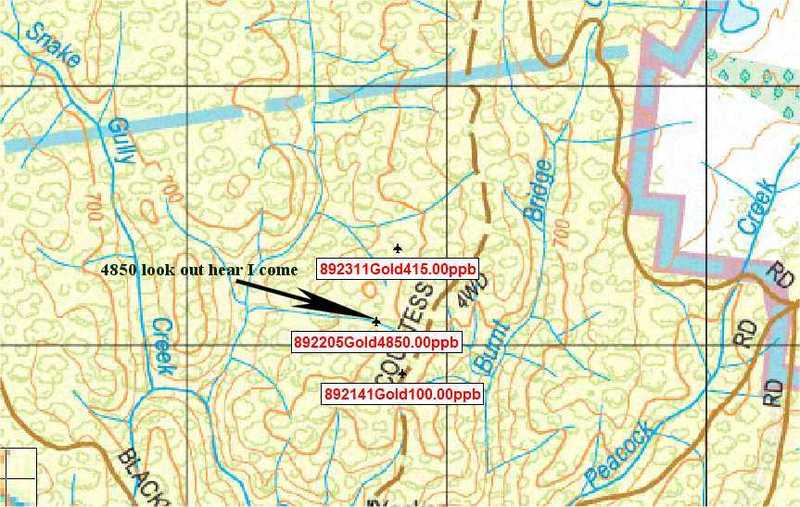 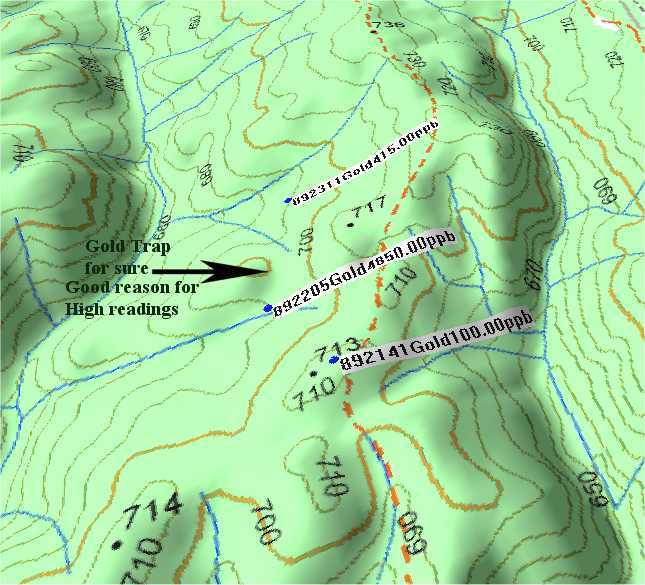 Very impressive work indeed - No wonder you are successful

Thanks for taking time to share this Golden stuff

Excellent work David, would love to get out there but going north for four months from May 11. Your research fuels the imagination. Thanks.

Dave,you out do yourself every time. All I can say,is thanks for sharing it with us and much appreciate your knowledgeable input.

My goodness Dave , thats going to take quite a while to get one's head around all that info.

Overall thoughts on it ?

Your way of presenting the information and explaining what it may point to is great.

Sure beats arriving somewhere and randomly waving the detector around only to walk away disappointed.

Thank you for taking the time to post this Dave.