Next Meeting of the Central Goldfield Branch

Next Meeting of the Central Goldfield Branch

The Central Goldfield Branch of the PMAV next meeting will be held on Wednesday the 16th. at the National Hotel Clunes. 6pm for tea and 7pm for the meeting. Our Guest speaker this month will be John Tully of the John Tully Maps fame. So come along and enjoy what will be a good and interesting evening with John. You never know but his info and talk could just lead you to that big nugget that you have always been looking for. "All Welcome"
wombat

They stopped doing the maxed grill

Thanks for that - see you there.
Cheers

We had a great meeting last night with 20 members and guests turning up. The pub put on a full menu at a very good price and was enjoyed by all. I kicked of the meeting at about 5 past 7 with a welcome to our 2guest from NSW followed by the usual appologies, reports of "Clean Up Our Parks"that I have been pushing with the PMAV, then followed by any gold finds report. John Tully was our guest speaker. John did not talk about his maps or any gold related items, but about a very old Pirate Treasure that he is looking for along the East Coast of Victoria. What an very interesting subject and the story he told of how the treasure arrived here in Australia in the early 1830's. It had us all intrigued. He has not found the teasure as yet but he thinks that he may now be very close to where it could be hidden. The meeting then finished at about 8.30. Ruffles then brought in his SDC 2300 and showed us the modifications that he has done by adapting a swing arm to it and how he taped up the arm rest so it would not collapse on him every time he took his arm out. Over all it was a great meeting.
wombat

Following on after the meeting on Wednesday night we planned to do a Sunday detector outing.  On the day about 12 members turned up at a pre-arranged spot and I took them to an area in Maryborough that John Tully forgot to put on his map. I had been here about 3 years ago and found gold. Sunday was a typical winters day, cold but clear. Everyone arrived at about 10am and we headed of to our detecting spot. After a quick briefing about this area we all greared up and headed out. I was the first to find a small nugget of about 0.18gm. but others were quick on my tail also reporting finds. We had 5000's, 4500's 4000, extreme, and 2/SDC2300 on the ground. Gary Flyspeck had his 2300 swinging with his wife Kaye following behind. Every target that Gary was finding was un-fortunately small bird shot except of one Very Tiny bit of gold that he finally found with the 2300. He then showed Kaye how to use it and with Gary's help also started to find "BIRD SHOT". After lunch Gary jumped onto his trusty 4500 and Kaye then went solo using the 2300. After a few minutes Kaye sang out to Gary, "Have a look at what I just found" Gary presuming it was going to be another bird shot came over. It was a nice piece of gold found with the 2300. Not only Kaye's first ever bit of gold she has found with a detector but the BIGGEST bit found out of Gary and her for the day. So Gary mate if you are still finding bird shot mate, just ask wifie there what you are doing wrong. I'm sure she'll lead you up the right path, mate.

Total nuggets found for the day was 16, the biggest being about 0.4gms Well done Rawdy. If anyone wants to know what the ratio was between the 2300 and the other detectors. 5 nuggets for the 2300 (with the help of Keye

) and the other 11 were split up between the other detectors. Don't think I'm knocking the 2300 I'm not it was just more of the other detectors on the ground. I also met Des/Driftwood (He is a new member of our forum now) what a nice guy. Living every close to were we where detecting and he came over and introduced him self. Overall I think everyone had a great day with most of us finding gold.
wombat

thanks wombat.....yeah I still have my tail between my legs. but a good day all round and everyone got a piece, and at least the weather held off and a few laughs had. It was good to catch up with everyone and meet some new ones as well. cheers 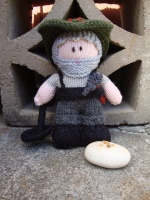