Thx Mike, still getting a few but nothing like the bit i got early in the peace.

Getting a wee bit hot now and thinking of giving it away...im stuffed after digging a .5gramer.

Been back to Kal a few times to check on some interesting spots, but nothing came of it so went nth again....should have stayed as its a little hotter up here and the flies a bigger.

The others left about a week ago for home, Arron's dad died and he had to go sort stuff out.

I think we need a holiday....Esprance looks nice, and the thunder storms even better. Maybe take a week and see if i can get a few photos.

Sorry to hear about Aaron's Dad and I hope all goes well for them.

Yes the weather is starting to get a bit on the warm side here too. We packed up today and are thinking of calling it quits as well. The Flies! well they have certainly gotten bigger here as well, we have been getting hit with March Flies.

We don't usually see them until around Feb back home.

Esperance sounds good to us, as we have been wanting to go down there for the last few years. Jen's checking out some areas as I am typing this up.
Any ideas??

Hi Mike, check out the free camp about 70ks sth west of Esprance, they allow dogs. The NP 50ks sth east from what i know dont allow dogs.??

Thanks Owen, yes that sounds like Quagi Beach area and was one of the ones we were looking at.

Well done. Always good to go back to old ground & find more gold. Makes you wonder how you missed them in the first place but as we know no one ever gets it all. Different size coil or even same coil on a different day. Different climatic conditions, different ground moisture or even ones self more mentaly ground balanced on a different day. Either way....good effort.

Mike54 wrote:Thanks Owen, yes that sounds like Quagi Beach area and was one of the ones we were looking at.

Well there goes that idea!
Mike rang a lease owner, and we are off to try our luck on another lease.. yay..

But I will get to see esperance one of these trips..

Nice gold Owen, did you find any more today???
How's the better half doing????

Hi, Jen,
I got nothing for the days efforts, but the women found the last little bit on this old patch. Moving on tomorrow to try another old patch.
Counting the days till we head sth for a well earned rest before the long haul back east.


Trading the red sand for white....and the 4500 for the coin detector.

Try Alexander Bay east of town. Not. a nat park so dogs OK.
Also can take the Parmango road to Balladonia from there.
70k,s really bad but rest good.
Sharks hungry down here at the moment, might appreciate a bit of Eastern Stater...☺

Will have a look..
I see that the Sharks are hungry..

We is out of here!...enough!...these flies are beyond that of mortal man.

Now we can get out and into serious detecting now all the visitors have gone.

Just joking Narrawa, we gave it away third week in September, mid 30's is not comfortable .
Hope your season tally keeps you smiling all the way to the beach and home.
Next year bring your woollies it will probably be still chilly at this time of the year.

Now we can get out and into serious detecting now all the visitors have gone.

Would have left a week ago but i got onto another ounce.

Just joking Narrawa, we gave it away third week in September, mid 30's is not comfortable .

Sitting here in the van being tossed about like a tinny in a cyclone with this wind aint comfortable either i can tell ya.

Hope your season tally keeps you smiling all the way to the beach and home.

Being a prospector, there is no tally good enough. But we'll take what it is we found this season with a smirk.

Next year bring your woollies it will probably be still chilly at this time of the year.

We felt the cold on first arrival for a few weeks, but it faded rapidly this season.

As for returning next season.??

Not with this technology...we'll wait for the next offering i think.

Congrats to you and your partner bud on the WA assault

some very nice finds, so over all did it come up to expectations that you expected?

WA lives up to all expectations, this being our third trip....not quite as good as last season, but that was due to my research this time round. Still happy with what it was we found...but not as much as one would have liked.
Being a prospector, there is no amount that would quantify being happy.

We will return with the next offering, just not with this one.

Its time to take in the sights as we head home.
We'll keep ya posted as we visit some a long the way.

Have a good and safe trip back Owen & Annette.

Thx Mike,
We gave up detecting weeks ago and headed south....yep!!, we traded the red dirt for the white. 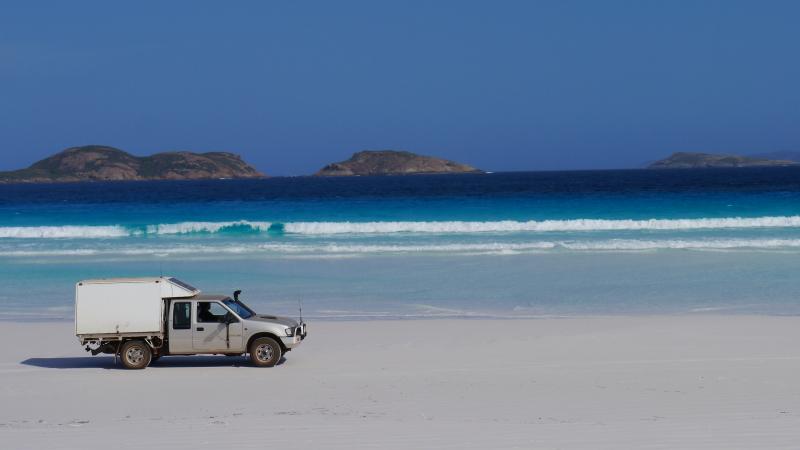 It was a good thing i happened along here, cause this rock would have ended up in the drink.

Its all good now tho, just a little bend in the middle... nothing thats gunna subtract from its awe. 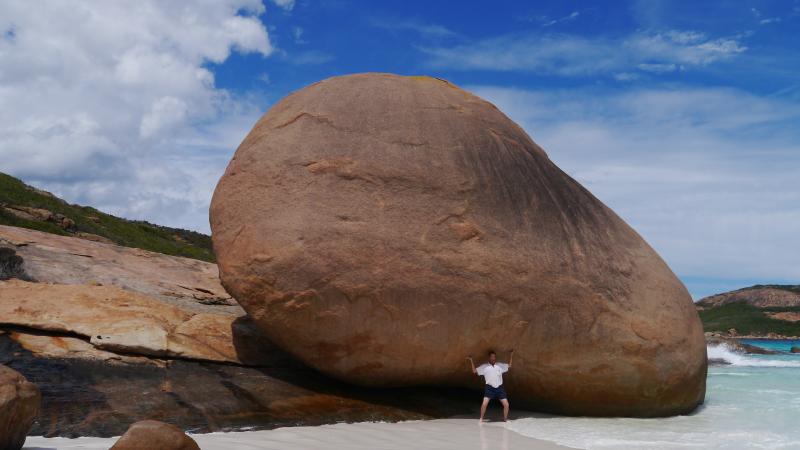 Now sometimes cameras have this uncanny ability to wrongfully report...not in this case, the water really is that color. 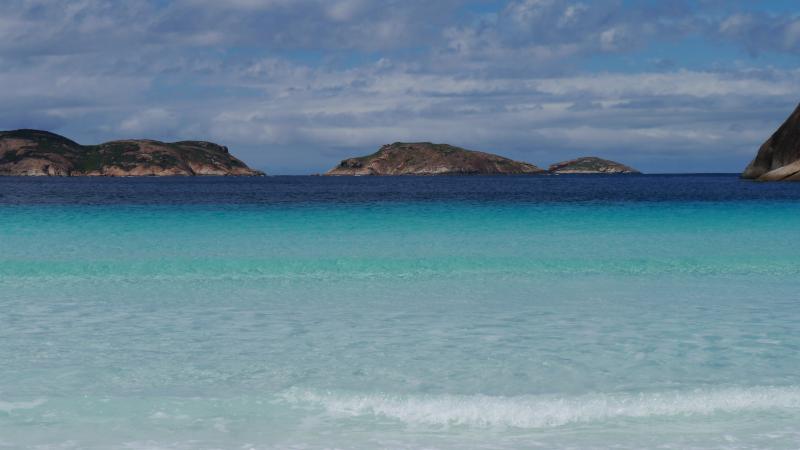 We found it hard to pull ourselves away from the coastal areas, got the coin detectors out on the beaches in SA from Ceduna to Streaky Bay. Found a few old coins and generally had a good break from both detecting for gold and traveling.
Had a stay at Pildappa Rock before heading for home.....and we pulled in to the central west of NSW this arvo.

Got lots more pics of this that and the other, but not long home and im rodeo lagged.

Good to see you both back safe and sound.

Now, hit the gym and get your strength up for 2015 and the next QED beater!

Better get a bigger pick! 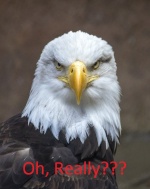 To say I’m jealous Narrawa would be an understatement, not just of the gold but your boulder stopping power is outstanding, well done!

Some nice pictures Narrawa. I missed your post earlier as i have been busy on another forum. Pm sent.