i need to buy a pick... nothing too heavy cos im only little but what would be the best buy?
I only get out bush once a month so dont want to spend hundreds of dollars on something i'll barely scratch but need something more decent than what i have.
All advice appreciated.... cheers

G'day, I have read that a few had problems with the head of the pick comming loose on the cc, not sure if this has been rectified or not, they do come in different sizes and weights as do other brands as well.

have a look at 'malleeboy picks'

I'm not sure of the breed of mine (bought it at coiltek) but for the size of it, it is light, it did break in half but I gave it a quick talking to with the mig and has not givin up the ghost yet. You will find picks that will not cost the earth and a few under 100 clams.

Go the Walco, ive got the large one...very well constructed and i can lug this thing around all day, but being a little lady go the small one....It will last a long time....

just have to head to MD before my trip now (unlikely, lol).

I have'nt used a cc pick as it was a little overpriced. So i got a walco one for $70 and it has well and truly earned its keep during last year. It scraped and smashed its way thru plenty of dirt n hard ground to retrieve many a golden prize and plenty of not so golden ones aswell. And after all of that, still looks as sturdy and capable as the day i bought it.

these maleeboy picks,, where are they available from,, can't even find a reference on google,, is the spelling right ???

Hi MM... www.nuggetsfromdownunder.com.au
Mudgee NSW but they do mail order

Walco is better value imho, and are lighter for the size. I use them (got a small one and the larger one, sizes 1 and 3 i think.)

CC picks look like they will be better at breaking up conlgomerates and other really hard ground.

got a walco. On the bigger side but i wanted a longer handle so i didnt have to keep bending while scraping junk off the surface. Bad back you see (need a new job

). Will see how i go dragging it around for 8 hours, lol.

Thanks all for the advice

Iv been using a Malleeboy pick now for a few years, and when you lay into the earth with these things it causes the San Andreas Fault to vibrate a tad.

Even the folk from Newcastle pause when where out detecting.

I sh!t you not, these things are the Snap-on of picks, and are right up their with Football, Meat Pies, Kangaroos and Holden Cars !!
If your not swinging a Malleeboy pick then your wearing a dress!

Speaking of wearing a dress, my Missus uses a Malleeboy pick to, its shorter then the Arni

version but dainty it aint! when she swings this thing into Terra Firma, ground dwelling rodents tremble in fear! and thats not all, i was told by a crippled guy the other day, that his condition was caused by a Malleeboy pick, yep!... he hit himself in the leg with it, and it broke his back as well, lost his leg tho...i said ya bloody lucky it didn't shatter every bone in ya body!! ...to right he said!

In fact i heard that Malleeboy picks are so good, their wanted by law enforcement. Who was telling me the Army are trying to get their hands on them also?? .....

Oh! by the way....the sword in the stone from biblical times was actually a malleeboy pick!

Ay Wassy, my new Malleeboy picks going to have one of those fluro handles... aint that right?

I haven't seen one in the flesh, good spot not to see one actually

Just about to pick a new pick so gimme some pics

www.nuggetsfromdownunder.com.au
I have no pics mate, but hes a prospector and a good friend, to give him a plug is not really needed. Rainbo and i have been using his picks for the last two years, and will be getting a spare on the off chance we lose one.

I dont own a malleyboy one but have seen them, they are a light wieght type but dont be fooled they are made very well and are strong.
I use a mid size walco http://www.bendigogold.com.au/proddetail.php?prod=pickmedium
and carry the larger version (not avaliable now i believe ) in the van/car.
I have found the mid size one to be a good general purpose pick easy to use and light and perfect for riding around on the postie
I have had it for 3 years now and only sharpen it once, mind you id be classed as a casual user (of the pick that is).
The CC im not impressed with after seeing MTs one it may have been a one off bad build but i can not say, and at $200 sheeez way over priced.

Narrawa think Malleyboy is pretty flat out at the moment the last thing he needs is more work,pretty sure if he lives thur the harvest the last thing on his mind will be making picks

.
Ease up on the plugging bloke you wont get a discount you know

freshwater wrote:
Ease up on the plugging bloke you wont get a discount you know

Iv already had my discounts John.

The guy took me under his wing early in the piece and got me off to a good start in prospecting, and i dont forget services rendered.

But your right, he doesn't really need a plug, i just did that because i know it'll give him a chuckle.

Narrawa, your 'plug' would be a fantastic ad in a magazine! Actually i often read your posts to my housemate because they are so darn funny. We reckon if you take all your posts out of this forum and whack them in a book, you'd be pretty rich lol. Great writing

Given the good friends iv made over the years, many of who are prospectors, id say im rich enough.

Having a warped sense of humor sure does help.

freshwater wrote:
Ease up on the plugging bloke you wont get a discount you know

Iv already had my discounts John. The guy took me under his wing early in the piece and got me off to a good start in prospecting, and i dont forget services rendered.
But your right, he doesn't really need a plug, i just did that because i know it'll give him a chuckle.

, what no humour anymore

Narrawa wrote:www.nuggetsfromdownunder.com.au
I have no pics mate, but hes a prospector and a good friend, to give him a plug is not really needed. Rainbo and i have been using his picks for the last two years, and will be getting a spare on the off chance we lose one.

Thanks for the link mate (and you too Davsgold)

Just a thought based on your words in red above Narra.

Being as I'm old and senile (my wife's words, not mine

) I have a habit of wondering off after digging without my pick.
Being a genius as I am, before I ever set foot on the goldfields, I turned my pick handles into barbers' poles.
I ran a layer of insulation tape at 45 degrees down the length of the handles and then sprayed them with bright yellow
enamel paint. This has paid for itself on about 20 occasions I reckon.
I also run a hacksaw cut about a millimetre deep every 2" down the handle to the blade. This helps in establishing the depth of a hole

Hope this helps to save at least one pick

Good tip Rob thanks!
My detector sports a bright pink control box cover so I can find it again but I never thought about my pick handles.

I've lost one...that CC pick I had bounced out of the back of my ute between Wollongong and Bathurst and some sneaky thief most likely made off with it in his car grill

Morning Rob, yeah i know what its like to leave my pick behind after a big dig. Walking back to the camp for a decent drink then realizing you have left your pick at the last dig, then trying to find that spot again is a real shat!

I know Mick uses a fiberglass fluro handle on his own pick but not sure if these are the ones he's making and selling, they'd be worth a pretty penny if they were.
I have got 1 inch increments on my pick handle done with a soldering iron so that no splinters or sharp bits attack my hands as i dig or carry it. Your idea of the candy wrap sounds like a good idea so will do the same as you on our picks, top thinking.
I may even get some fluro tape just for the end of the handle as im a big fan of night time detecting, and have left my pick behind on night time digs when the call comes over the radio that its time for a drink.

Those words are much like the dinner bell ringing, and once heard all rational thinking is gone.

I have recently bought the ccpick 'Discoverer' after comparing them to Walco.

It has certainly made recovering gold easier and quicker.

The ccpick is well constructed, has a hard wood handle and is surprisingly light for its size. I expect it will last many years.
I like the 'Scrape' end as it is broad and has side wings. Scraping is now very easy and efficient.

The new walco I was comparing it to was of a similar size but had an arched blade and was only $10 cheaper. The arch seemed odd and in my opinion would make it difficult to dig a deep hole.

My two bobs worth.

I've started manufacturing these picks again, with permission from Malleeboy.

I have called them "Gold Digger Picks" but they are the exact same design and using the Malleeboy templates.

I have them listed in the For Sale section.
https://golddetecting.forumotion.net/t23496-gold-digger-prospecting-equipment 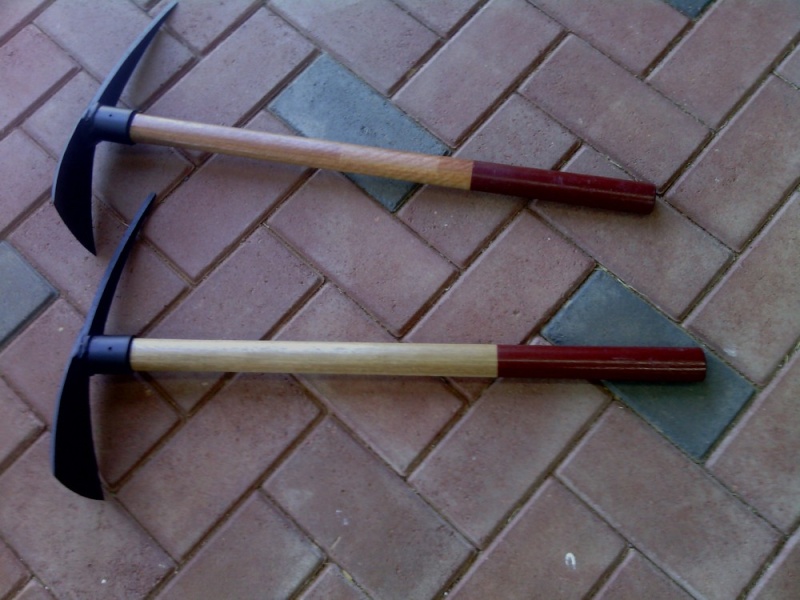 Rtanweb wrote:Walco is better value imho, and are lighter for the size. I use them (got a small one and the larger one, sizes 1 and 3 i think.)

CC picks look like they will be better at breaking up conlgomerates and other really hard ground.

Hi Rtanweb
I just purchased a CC pick the largest size.There is a big problem in that there is flex in the hardened steel which is curved too much and it doesn't penetrate the hard ground but bends instead.On the other hand though the steel is extremely hard and hardly wears so durability is great.The shovel end works really well as its quite wide.