For those who like reading about Ned Kelly, this book might be of interest.
I have always had my opinion of Ned but this book will shock those who think Ned was a bit of a Robin Hood. 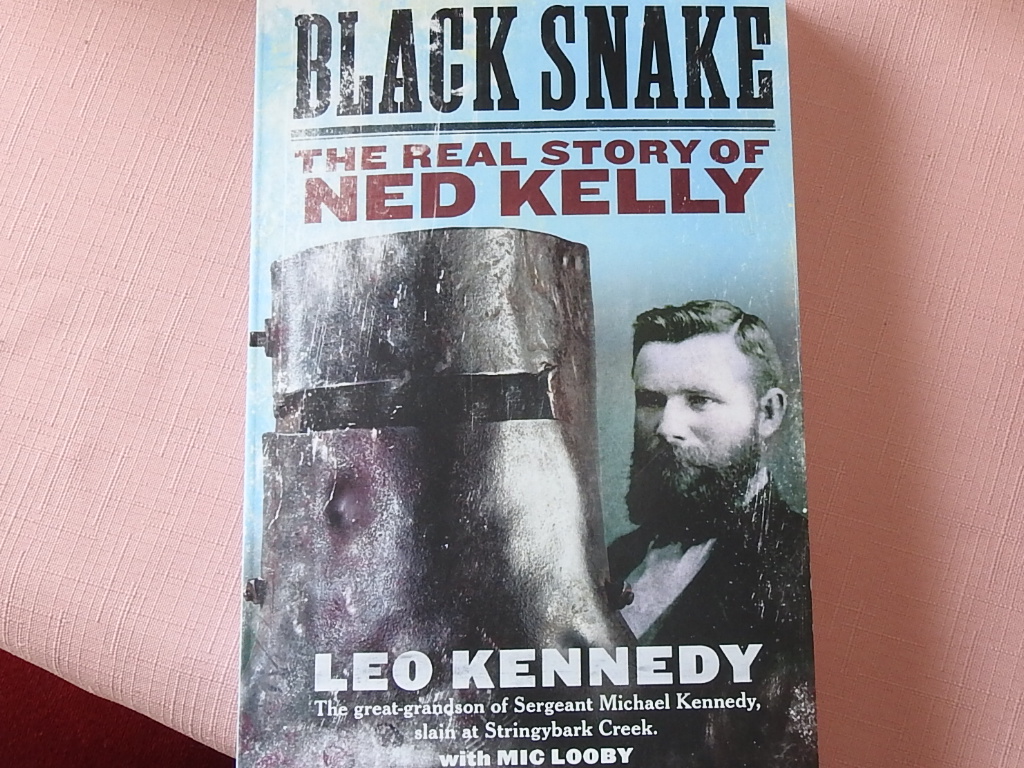 The problem from my point of view is that as it was written by the Great Grandson of Michael Kennedy then it is sure to have a level of bias.  As someone who was raised just down the road from the Kelly place, I will regularly "sit on the fence" on this topic, because he did good and he did bad.  There is also no doubt that the law at that time had its bad side as well and these things rarely get reflected in "historic" accounts.

From what I understand, the book was written in conjunction with input to the author from Kelly descendants.
Either way it is an eye opener. If you have read all of the stories painting Ned as a Robin Hood type do gooder then you owe it to yourself to read this book just to get a more over all picture of the Kelly gang and their activities and a view of the nature of the police of the day in Victoria and of what the people of NE Victoria thought of this gang.

From everything I have read of Ned Kelly he was a back shooting murderer. However, I have said this and more before and been labelled un-Australian and worse. Having read Black Snake I would say it is closest to a true depiction of Ned and his escapades I have read, and I have no bias, I form my opinions from all of which I read.

Has always surprised me how Ned and his gang of thugs ever became folk hero's. Was it just because he did not like the police getting in the way of his criminal activities. Police had to be tough in those days because everybody else was.
Sure I understand why his family would all stick together but the boy and he was just a boy when he started horse stealing, bashing people and displaying overall nasty tendencies started out bad from the get go. No matter how hard you look or research Ned and his gang you will be hard pressed to find where or when he did something good for people other than his family members.

The Kelly story has to be seen against the long standing animosities between the Irish and the English or should I say the between the Irish upper class English and the absentee upper class Irish who had long ruled ruthlessly to forward and maintain the privileged position of the aristocracy much of whose wealth had been accumulated by the plundering of the conquered nations that made up the British Empire. The great potato famine with 100,000 deaths also carried forward a sense of betrayal and exploitation of the Irish people. The "robber barons" of the late 19th century were also representative of the great divide between the poorer classes and the uncaring elites.

Government in the days of Kelly were fundamentally British or English so there was little respect shown not only by the Irish but the poorest in the Australian colony with many thousands drawn to Australia to escape the famine and then many thousands more lured from all over the world in the quest of gold and for whom the Eureka stockade rebellion was hardly a distant memory.

There is a lingering anti-authoritarianism that still is part of the Australian character and contributes to the legend of Kelly as something of a hero.

At one stage during the late 1800's it was estimated that nearly half the population of Australia was Irish or Irish descent. By and large the greater part of the Irish population did well. They were honest, hard working and popular. As with every nationality there are was a small percentage of the Irish who could not forget or forgive what the English had done to Ireland. These were often the trouble makers.

Ned Kelly wasn't the only one to feel hard done by but he brought it on himself and his family. You don't go around stealing horses and robbing stations and generally being an outlaw without some comeback. And then he went from bad to worse. Blaming it on the British is a cop out.

I stand by what I have said about the man and his gang, there was nothing good or heroic about them. They were never forced into being outlaws, they volunteered that by the decisions they made. We all make decisions, some of them bad but Kelly and his gang made bad decision after bad decision and paid the price.

Peter Lalor was one but few Australians would even know his name let alone what he did. There should be lessons in our schools remembering Lalor and every man woman and child who was involved in the Eureka Stockade, they are the real heros of our nation, not back shooting cowards.

There has never been and never will be anything good about robbing, stealing bashing , murdering back stabbing, cruel  a-holes.
They spend their lives making the lives of ordinary people as miserable as possible because they do not have the common sense  and brains to think at a higher level and so they achieve everything through the use of force and violence.
I guess the best part about Ned and his gang is that they did not last very long.
So they cut off his head when he was dead Ned and that's it angin on the shed. Boom! Boom!
I will say though that decapitating Ned was for my way of thinking, a very very strange thing to do.

A bit here about some of Australia's deadbeat bush rangers.
https://www.australiangeographic.com.au/topics/history-culture/2014/10/australias-most-notorious-bushrangers/