Has anyone looked on Ebay under "Australian Gold Nuggets" for sale lately, for I thought my glassed were playing tricks with my eyeballs. For sale is the largest in size 1.86 gram nugget I have ever seen from a new ebay seller & yet I can't believe there are actual bidders bidding for this.

& there's even more for sale?

Check it out & tell me what you's think?

Kon, do you have an item number? Cant seem to find what you are referring to.
Sorry, have found it, and some of his others.
Here is copy n paste
GOLD NUGGET 3.23 GRAMS (AUSTRALIAN NATURAL). Sent with Australia Post Pre-Paid Parcel Post Satchel 500g.

An Absolutely incredible gold nugget directly from DRC and Western Australia!
This 100% natural nugget was recently unearthed with the help of a metal detector near Kalgoorlie. It weighs an astonishing 103.9 grams and is extremely pure, somewhere between 95-98%. Nuggets this size and shape are very rare and quite collectible and this one will be a highlight in anyone's nugget collection

Actually tempted to buy if good price. He is stating gold purity ect, paying by paypal you would have full refund guarantee if not what add claims.

Most likely a scam Travelergold & yet, I can't believe people are bidding on the Items for sale?

Of course direct bank deposit or cashiers check only, for the quicker the getaway the better

"DRC", Democratic Republic of the Congo.

Have a look at his other large slug of gold for sale, where he's offering payment through PayPal, but in his advert description write up bellow, "payment through bank deposit or cashiers check accepted Only"
Something definitely not right here, a mistake in the advertised heading. It should read/be 186.0 grams (5.98oz) not 1.86 grams. Same for his other single slug of gold 3.23ozs (104 grams) not 3.23 grams.

I'm guessing it's this one.  If you look at the images below the main image (see below), he's using what I would call "stock images" (which is permitted by Ebay for other products) but there's quite a contradiction in all of these pictures.  The main image he's chosen would probably be more than 2 or 3 ounces, not 1.86 grams.

Then, when you look at his other nugget, (3.23g) he's got the wrong numbers on that one too.  I can't tell if it's an intentional scam or just someone that was clumsy and copied the wrong numbers down in relation to different nuggets that he might have been going to sell.  I guess he can pull the items before the final countdown to the auction.

It's possible to get large nuggets that size that are incredibly thin. I seem to remember Mr J Porter digging a large, deep target on one of his videos and worrying that it might be a superflat nugget that was wafen this but with quite a large surface area.  I think he might have dug something like that years prior because I seem to recall him stating a 2gram figure (or something similar) was likely to trigger a similar target sound.  He was relieved then the nugget turned out to be a large, thick one ...instead of a large flat/thin one.  I predict these will sell for far more than they will be worth. 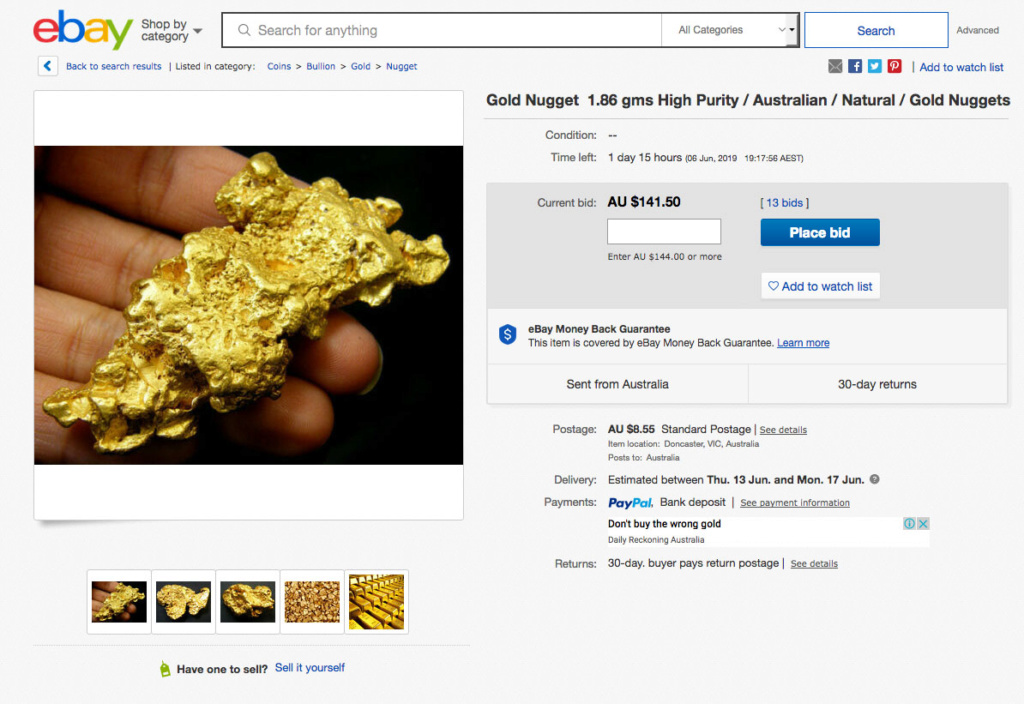 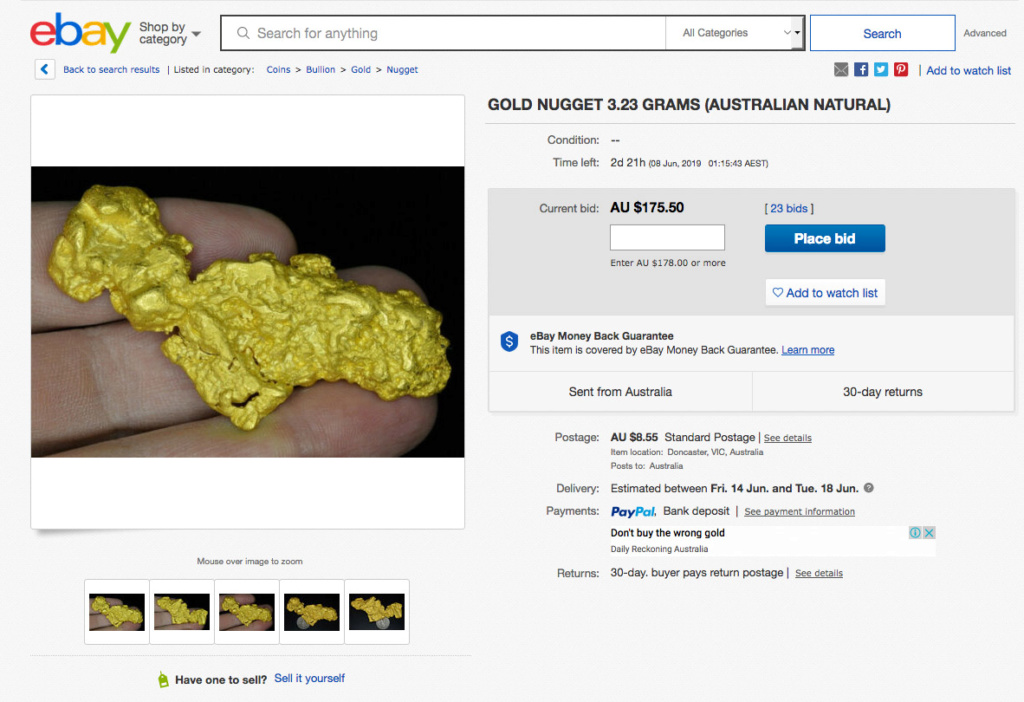 The thing to look for is visible when you scroll down on the Ebay page... it reveals this message from the seller:

"In your message make sure your contact number & email is attached for further talk.

* Due to the value of this nugget, a cashier's check or bank wire transfer will be our only accepted forms of payment. Please contact us with your contact address , emails address and phone number if you are interested in purchasing this beautiful chunk of precious metal.."

That's against Ebay's rules... and those rules are in place to deter and prevent scammers.
* Cashier's Cheque? Kiss your money goodbye. Not permitted by Ebay.
* Bank Wire Transfer? Forbidden by Ebay.
* Only accepted form of Payment? Forbidden selling behavior by Ebay.

But this just keeps getting worse... 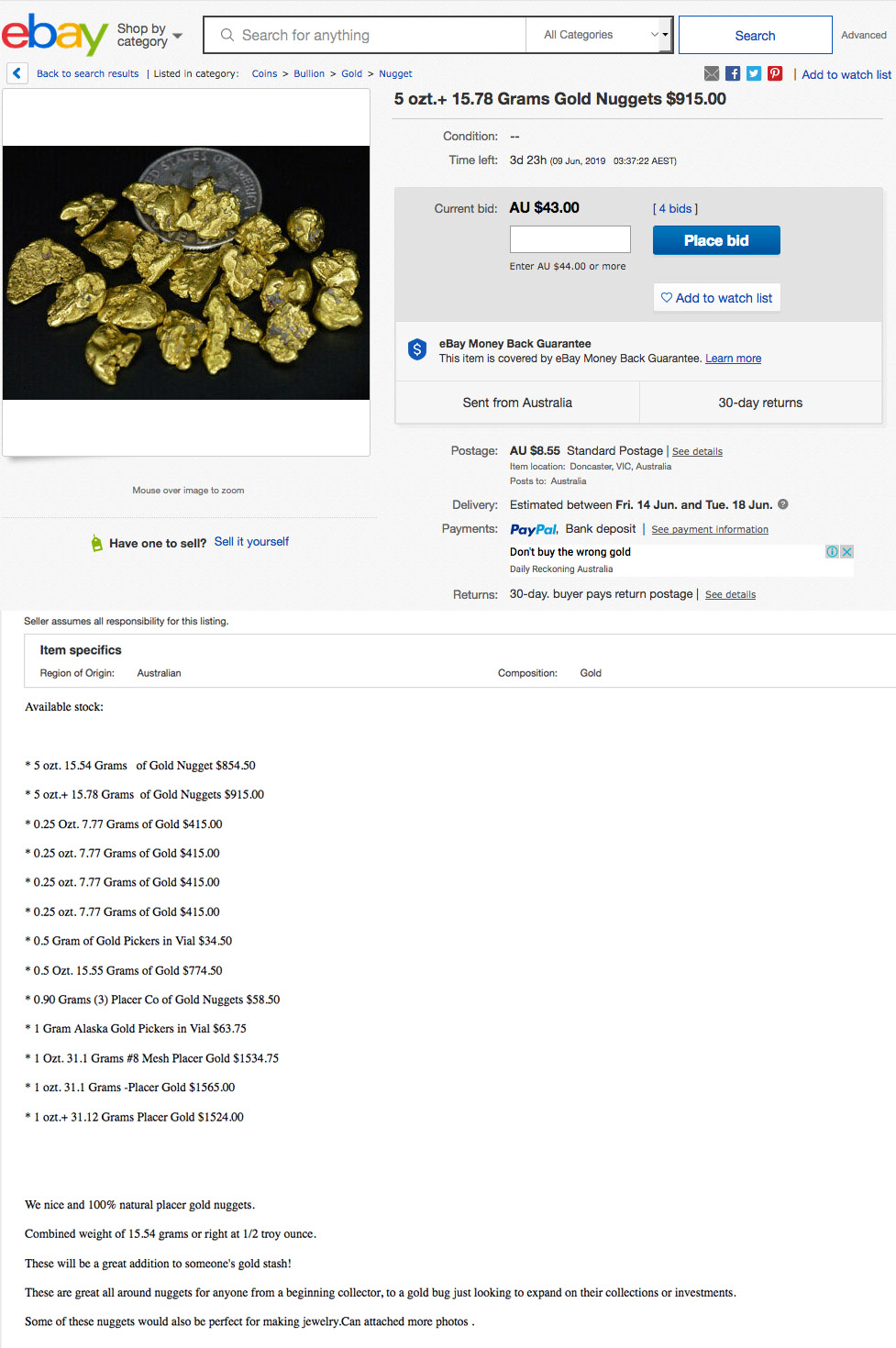 Alright... I looked at the third item he's selling and if you scroll DOWN to view the details, there's some SERIOUS concerns.

Here's an alarm bell:
REGION OF ORIGIN is stated to be "AUSTRALIAN"

Then below this there's a long list of "Available Stock"
The description of several is "Placer Gold" (which is a common North American term, not one used here)
He then describes one item as Alaska Gold Pickers (1 gram for $63.75)

Alaska and North America seems to be the source of a lot of realistic looking fake gold nuggets that they sell for novelty purposes.  They're coated in 24 karat gold via vapor deposit.  The gold vapor doesn't stick to host rock though... note the host rock visible on the nuggets on the right hand side of the image.

Note the uniform texture and color in the photograph?  There's something about the way gold-coated copper nuggets appear on camera and it's certainly reminding me of this when I see this picture.  We bought some for a window display but decided it was too risky to put them out since people were already stealing the tiny bits of clay that I'd coated in gold leaf.    In the end we chose to avoid using them at all, just to eliminate temptation.  But the ones in this picture certainly match the characteristics of the fakes.  There's a hint that they've been tumbled too - if you look at the number of flattened edges of the nuggets in that group shot.

The first line in the bottom paragraph looks like it was run through a translator: "We nice and 100% natural placer gold nuggets".  I'm convinced this is a scam.  Especially when you look at his feedback: ZERO 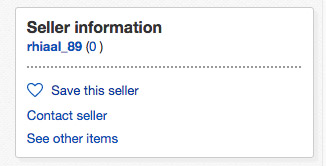 Finally, absolute proof you're dealing with a scammer...

Then there's the final nail in the coffin:

Are you ready for this?

He's selling an ENTIRE CRUISE SHIP.  It comes with everything you'd want... but includes a refrigerator. 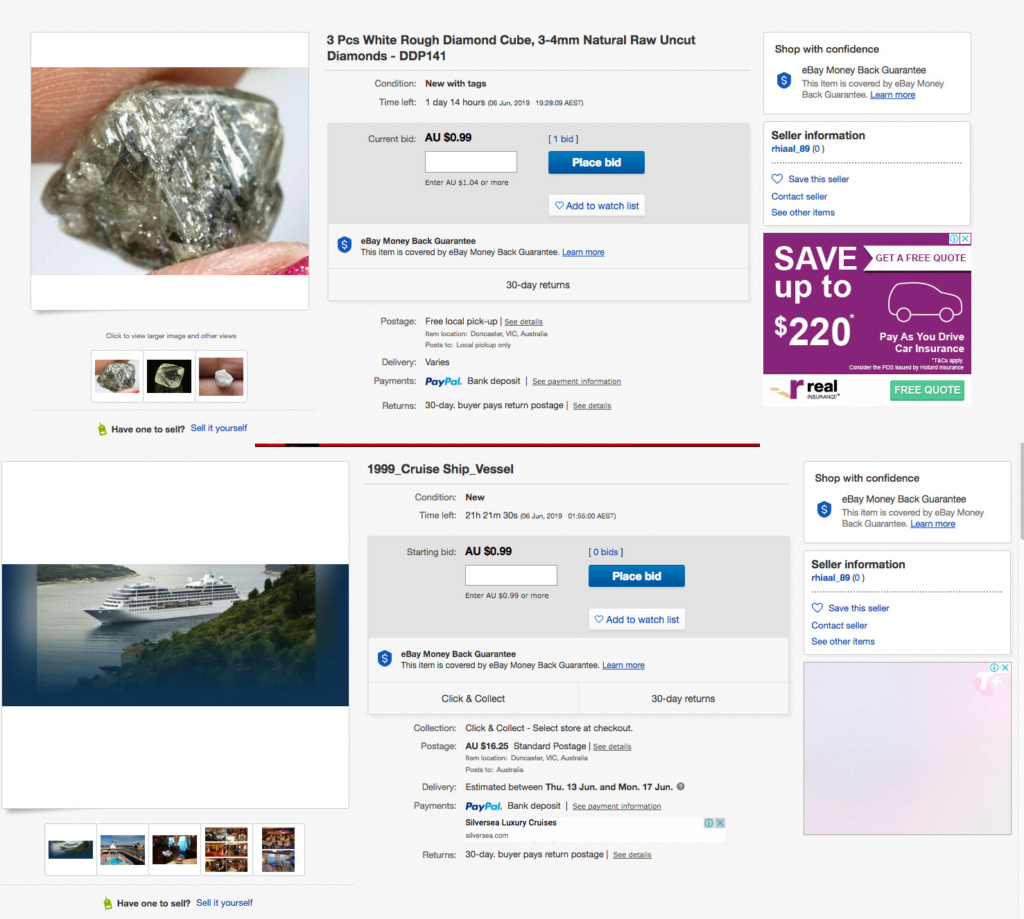 The entire listing appears to be total garbage and that diamond crystal if it is the actual item for sale is rubbish. I doubt it would be a Blood Diamond. Most of those stones do have some cutable value.

I don't suppose they have the Sydney Opera House or the Sydney Harbour Bridge for sale as well?

I had e-mailed Rhiaal_89 to verify size of a nugget and what DRC stood for and they did finally reply. I politely told them I wasn't interested and now this morning I received an e-mail from E-bay about them. MC139 NOTICE: eBay Communication Partner Warning.

Looks like someone must have reported them eh Nero.

Just to see "Auspost Standard Service" deliver it to my door

Thanks for the update Nero. One to many false claims to be legit.
No Sharkbait. I was told Auspost Standard Service would not be enough to cover a package of this size/weight. Tracking & signature required.

rockhunter62 wrote:I had e-mailed Rhiaal_89 to verify size of a nugget and what DRC stood for and they did finally reply. I politely told them I wasn't interested and now this morning I received an e-mail from E-bay about them. MC139 NOTICE: eBay Communication Partner Warning.

Looks like someone must have reported them eh Nero.

I received the same notice. Looks like the listing is shonky.

It definitely wasn't me that reported this scammer... I attempted to do so but was I needed to sign up to eBay to report the listing.  I shut down my eBbay and PayPal years ago over a dishonest buyer in America that stole from me... and several attempts by overseas bidders to try and rip me off using several different scams.  It's sad because I enjoyed trading on eBay for many years.  If I was still a member I would have tried to report him.

It would seem that someone must have reported the seller.  All of his items have been removed.

There was a case back around 2008 when some 15 or 16 year old kid living in Castle Hill NSW managed to list and "sell" dozens of high end wristwatches on Ebay.  The money was transferred to his savings account and it took weeks for buyers to realize their products that they'd been tracking were empty or non-existent satchels.  Eventually they realized they'd been duped.  He spent most of the money on expensive rooms in hotels, personal purchases, drugs and alcohol before the authorities caught him.  It turns out his mother had alerted the authorities that he was spending large volumes of money which he hadn't earned. But the police said they had no sign or reports of a crime so they ignored the kid and didn't investigate until eBay forced them to do so.  Of course, eBay and the Banks were too late to get much of the leftover change.  I'm pretty sure that the kid spent close to a quarter of a million dollars that he received. The items he listed on Ebay were very high end luxury items which were offered at lower than RRP.  Greed kicked in and people thought they were onto a good deal.  The watches were listed at over $30K to $80K.  The people who sent him money didn't even look at his seller history, which was mostly cheap items that left him positive feedback.  Pretty sure he was underage and faced no jail-time.

In 2011, a man and his wife in America pulled a similar scam.  They sold white-goods on eBay and sent out only the first few orders to generate a stream of positive feedback... which in turn attracted the victims.  Then they set up fake accounts to award themselves with fake feedback.   They did not ship any of the new orders at all and simply took and spent the money.  All USD $1.5 Million Dollars of it.  You can read about it HERE: https://www.dailymail.co.uk/news/article-1394958/Man-jailed-12-years-eBay-scam-saw-wife-live-luxury-lifestyle-stealing-1-5million-customers.html .  They used the money to buy a Boat, a Horse, to renovate their home and to buy stocks and shares.  There were about 250 clients who were ripped off.  The "Seller" got 12 years in prison.

From the news article: "The credit card companies refunded the victims of around $1.2 million, while those who wrote checks lost their money, totalling $336,000."