Got Myself A Zed. Blooded It In The Weekend

Got Myself A Zed. Blooded It In The Weekend

Hi Guys, I made the plunge & got myself Minelabs latest flag ship. The mighty Zed 7000. Mrs JW was up the north island visiting family & had a wedding to video in Camebridge. The weekend before I made the trip up the West Coast to view & then purchase my latest acquisition to my detecting arsenal. With Mrs JW gone for the weekend I made the trip to my detecting location straight from work on friday.
Two & a half hours later I was rigging up the mighty Zed. Due to our mild ground I was in High Yield/Normal. Gain on 13. Could have been higher. Soil smoothing off. The chap I got it off had soil smoothing in low but I turned it off. Other wise rest I am guessing was pretty much Pre set. Only trouble is it was blowing a gale. Put the speaker on 20. No bloody good. Thank god I threw in some head phones. Even then I still had to have the volume on 20. The wind was insane. It was difficult trying to keep still without getting buffeted around by the wind. Ok....we were off. Did the auto tune....ground balanced, but not over the ferrite ring

Hence detector was running a bit ratty. Bit like the 2300....but I could coupe with that.
The wind made it bloody difficult to hear & focus on any slight blemish in the threshold. I had targeted an area where I did well with the 4500 & NF 14 x 9. I had in fact got 2 pieces the weekend before going up the West Coast with the modded 45 & 11" Elite coil. There was no wind then.

There is very little to no rubbish due to the many times I have combed over this area.

I hadnt bagged on the zed loving those little round bloody lead balls. SHOTGUN PELLETS

Oh No... You just have to dig them dont you. So after more than my share of these critters I decided that if the signal had moved after a couple of ground scrapes I would move on. One dig I scraped & scraped & the signal just kept on coming through but getting more pronounced with each scrape. I was in to the schist bed rock & thought.....oh boy....this could be gold. 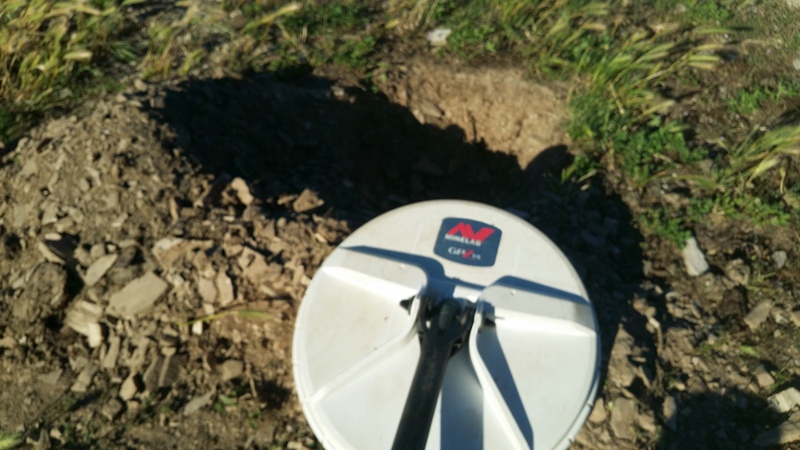 Gold it was. Ye Ha 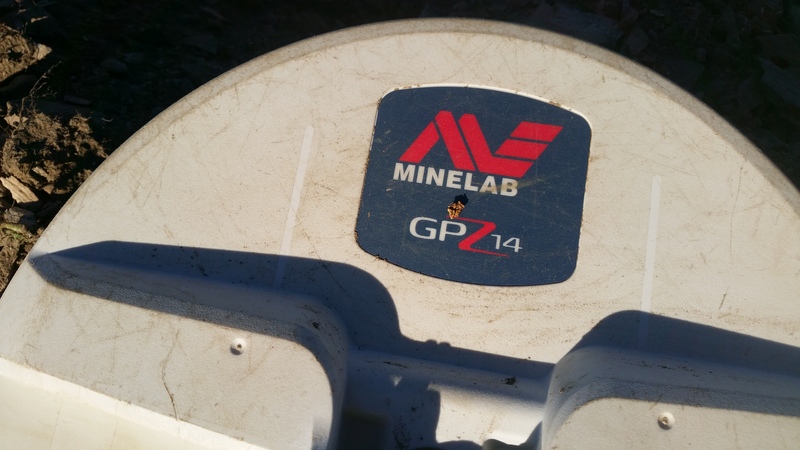 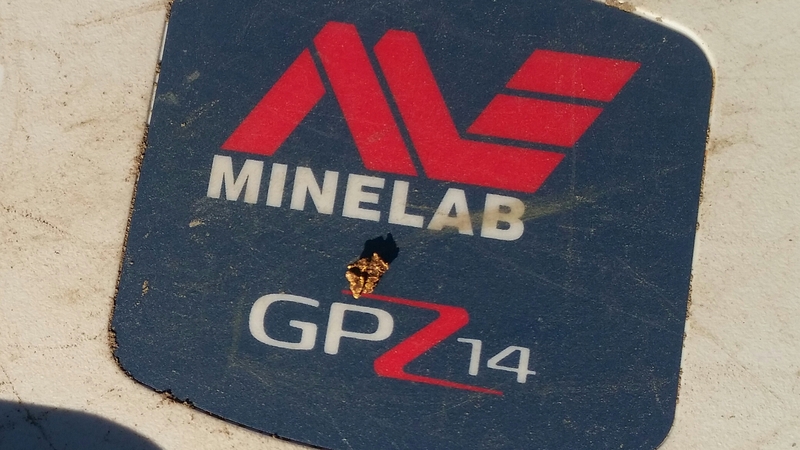 10 minutes later & 4 feet away the same scenario. Into that schist bed rock & signal still there.

And this is why 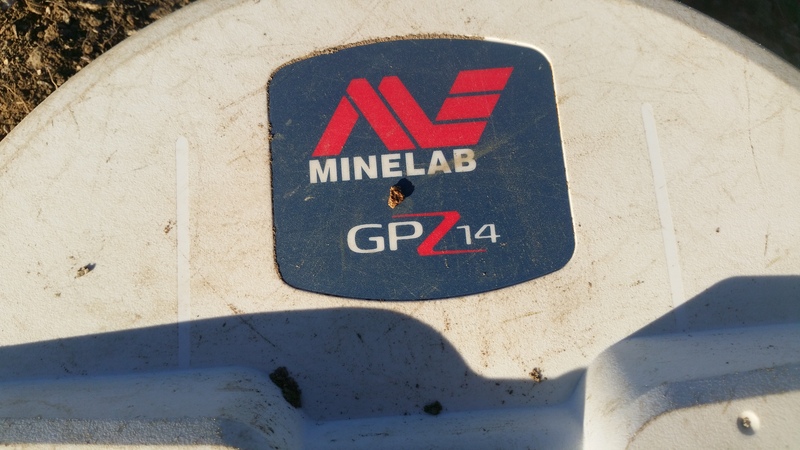 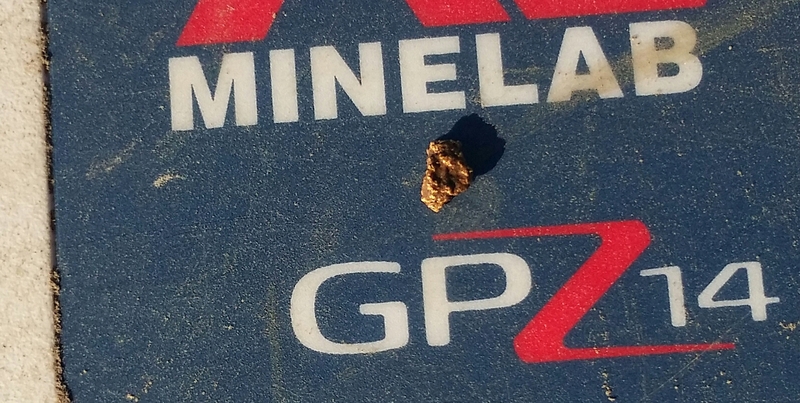 That was it for friday night. The wind blew me off the hill side but I was happy with what I got knowing I had given that slope heaps over the years. I would like to go back over it with the Zed when there is no wind.

Saturday dawned with the wind still howling. BUGGER. Went to another spot that was a bit more sheltered from the wind & another area where I had got over an ounce with the 4500/NF 14 x 9. Boy it was hard going with those bloody shot gun pellets. They were driving me nuts. Then I got a signal that stayed in the ground after quite a few scrapes. 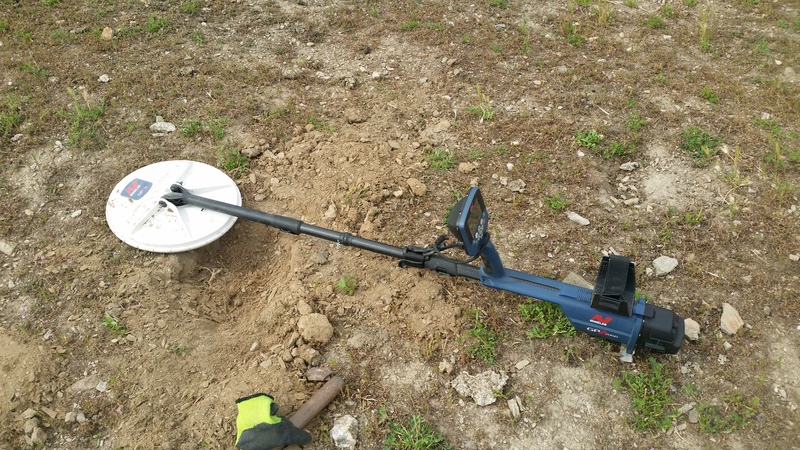 You beauty. A little speci.

But that was it from this area. Had a late lunch & coffee break & headed for my mushroom gully.....& yes ....there were more mushrooms. 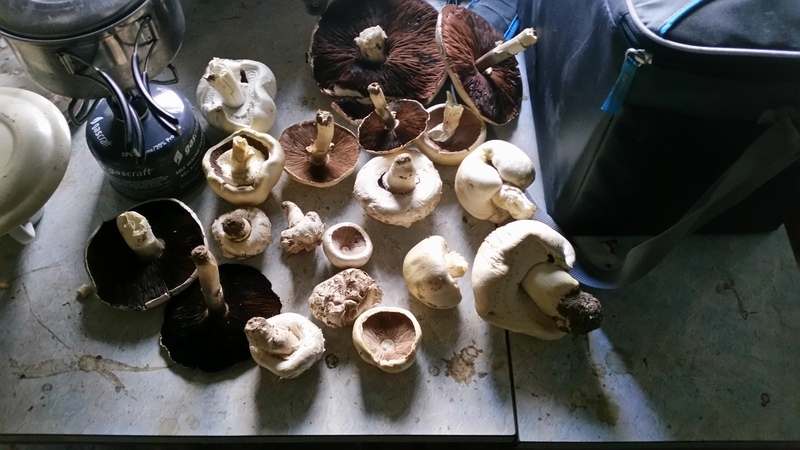 Got a good signal....all be it a bit warbly but it improved with a bit of depth.

Down in to that schist again. You beauty. Signal still there. 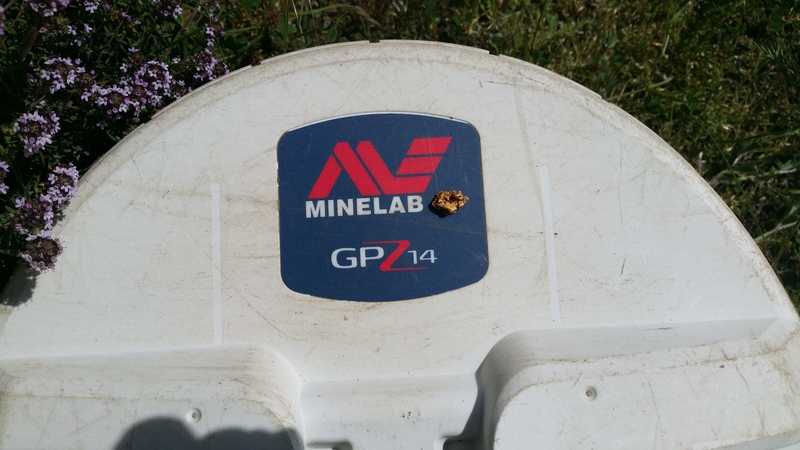 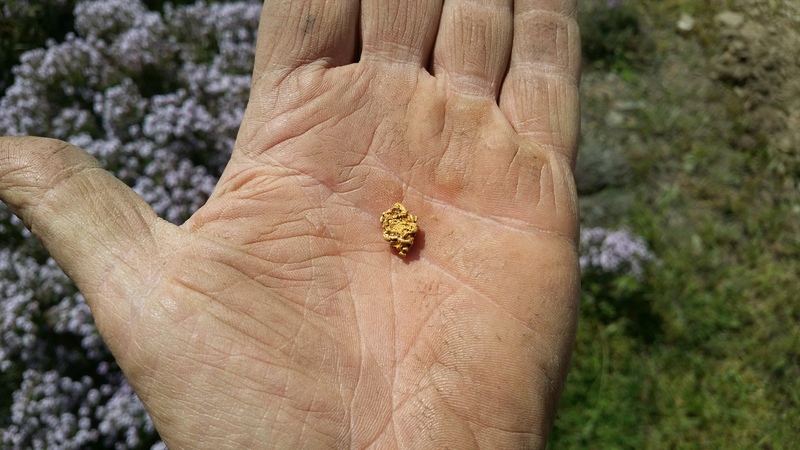 That was it for Saturday. Just the two.

Bit of rain during the night but the wind had dropped. Sunday woke to snow on the tops.

I went over a few areas & wasnt getting any thing but shot gun pellets, a live shot gun shell & half an old shearing clipper hand piece right in amongst some old timer digging piles. WTF... 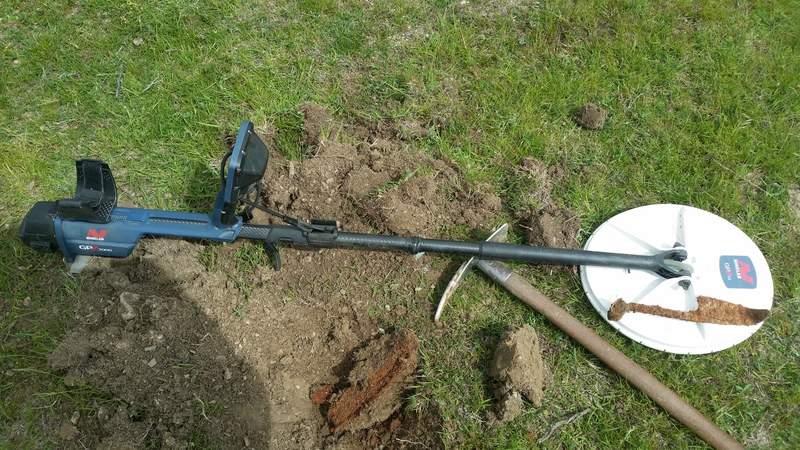 I went back to the area I was on friday evening. Got the most horrible, ugly, warbly, echoey, hollow sounding signal. Had wire or nail written all over it. Signal never improved, even whan it was out of the hole. So as I waved my hand over the coil to locate the target I just threw the hand fulls of dirt back in the hole. Mushroom top right. 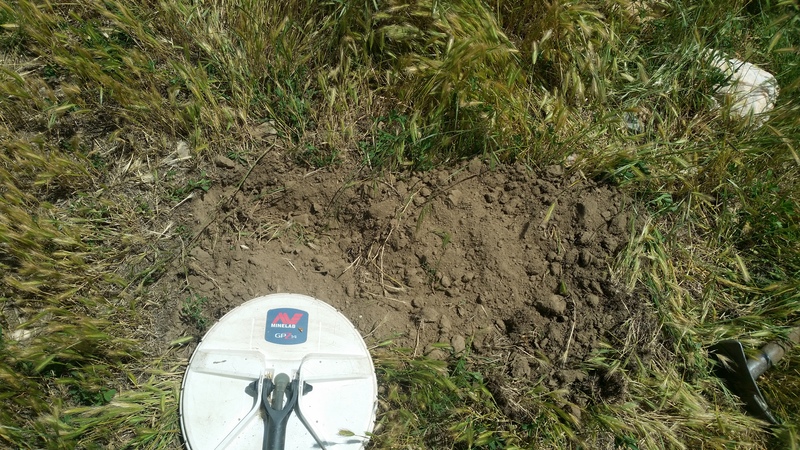 Got the target in my hand.

Well that was it. Battery went flat. So I headed home.

All up 5 bits for 3.88 grams. The Zed has been blooded first time out. Pretty happy with that. 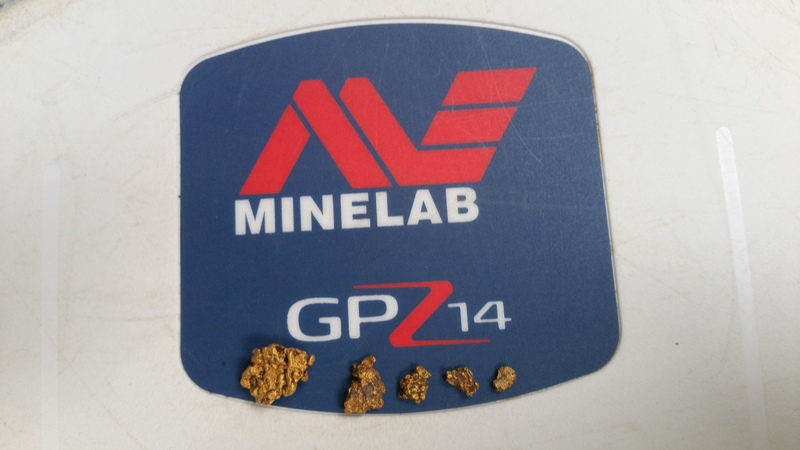 This was work back in Queenstown monday morning

Snow up behind QT

Top going there JW. Top show & tell. Well done. Learn the ins and out of your new GPZ & I guarantee ya, you're in for some nice surprises.

Hi there kon 61, Thank you mate. Yep....looking forward to getting some time under my belt with the Zed. I love the no leads.

Took a bit of getting used to actually. I wont be getting rid of the 4500 though as there are places I just cant swing that 14" coil. Cheers.

Very nice nuggies to christen the Zed on.

Congrats to you and I love those wobbly ones I've dug quite a few of those now with the Zed. Thanks for sharing your story/pics and hope this is just the beginning of many more for you.

Now that is a very nice way to start proceedings with the new detector Kiwijw.

To be honest I was not aware that the Z was as deadly as that on shotgun pellets. I just assumed that was the domain of the SDC.

May have been tough conditions, but clearly doing the job and I am sure you are well pleased. The wind chill must have been savage given the snow the next day. Headphones a good option when weather is cold I reckon.

Now you know what we mean when we say the Zed worked its magic, you won't be disappointed with it, especially if you can run it in "Normal". I hate the wind, it really drive one mad trying to detect getting blown around all over the place.

If you get the chance, when the wind is gone, try the B&Z booster with dual speakers, just plug the booster into the WM12 module, it's way better than just the speaker from the WM12 itself, if it's real windy you just have to go with the headphones plugged into the WM12

I think your really going to like this machine with a bit of practice.

And once again great pictures and commentary, good luck out there.

Nice.
First trip and great nuggets.
Good to have a confidence in machine. Noone will stop you now.

Congratulations on buying the GPZ7000

I do believe after .... you have used it for a while, that you may not use your other detectors much.
Then again you may prove me wrong

Love the scenery, the story..
It had a bit of comic relief, which we all needed (  the zed loving those little round bloody lead balls.)

Yep.. you do have to dig them.
It's hard to imagine that its snowing over there, as its getting mighty warm over here

Congrats on getting the Zed JW.  You do realize that every spot you have ever detected, is ready to be plucked again. Every one of them! Start cleaning them up.  Harry.

PS. Love the warbly ones. Funny that with the 4500, any warbly signal was usually a nail, but with the Zed it warbles on 3 things, 22 bullets, nails, and nuggets with pointy bits on them. If it's warbly and and not too loud, 99% of the time, it's a nugget.

It's always good to get that first nugget off the mark with a new detector.

got myself a Zed

Hey JW;
A little secret just for you because i enjoy reading your descriptive and pictorial posts
Shotgun pellets give away their identity fairly easily
Listen carefully to your future signals which when dug prove to be pellets..
They give a light but distinctive Double Blip
After a while you will know them and leave them in the ground...

Hi there Chrisso79. Thank you for that secret. Shhhh....don't tell any one else...lets just keep it to oursleves

I will listen real hard next time & try to sort that. Be bloody good if I could. Isnt that double blip caused by a target being shallow in the ground & close to the coil & getting read easily by the two DD centre windings as the target passes past both of those windings. Hence causing that double blip. I had noticed that double blip many times & will now pay extra attention to see if the resultant target is in fact a pellet. Thanks for that.

Thanks too for the kind words about enjoying my posts. Glad you appreciate them.

great start to your new machine, should give you great confidence to unearth more deeper and hopefully heavier as your learning of the machine increases.

great start to your new machine, should give you great confidence to unearth more deeper and hopefully heavier as your learning of the machine increases.

Hi Dave. Thanks mate. Cant wait for any bigger ones to come along. I am listening real hard & walking bloody miles.

Hows that bloody Goldhound, Dale? Hope he isnt getting too reckless out there. The crazy bugger. Hows Tremain too? You getting your share with that 14" Elite. Cheers.