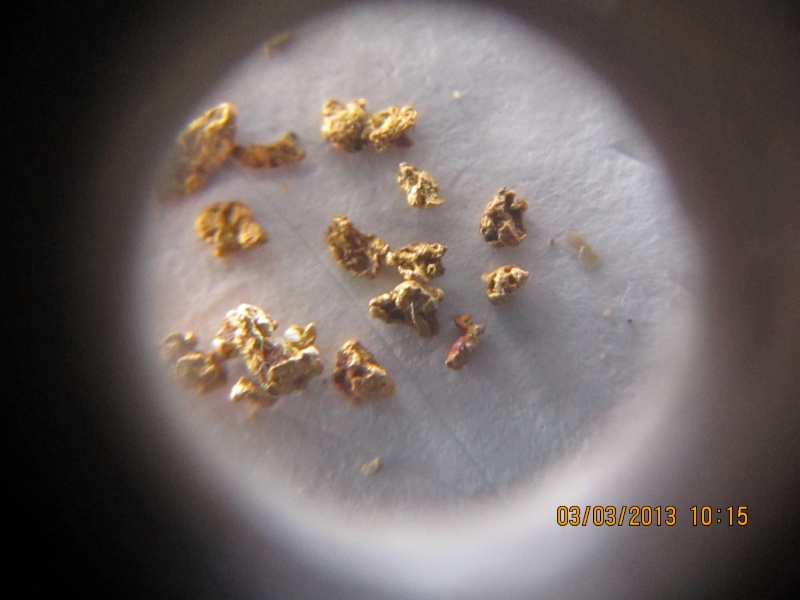 These came from deep creek last october,our very first find on our very first outing.Exterra 705 gold pack. 10 minutes out of the box and scored this in one scoop of noisy soil on creek edge. Dave

Having trouble with auto focus in camera at moment but will overcome this.Total weight was .83 gms. When I get a bit better at camera and computer I will do better. Does this look as fresh as we think. Dave

G'day mate those pieces look great,and yes they look fresh as they are still jagged, my suggestion is to try and locate the source. Good luck

Hi there Luckynug,I thought the same about them being fresh out the bank,their siblings close by but a bit tied up here in the north for quite awhile.Hopefully the local lads or lasses can latch onto them especialy after the local flooding.
Best of luck to them. If only.
Dave

I forgot to say,I posted part of the story under Jazzos Deep creek,gympie in qld goldfields. Dave

These came from deep creek last october,our very first find on our very first outing.Exterra 705 gold pack. 10 minutes out of the box and scored this in one scoop of noisy soil on creek edge. Dave

Hi shyneesteel, great photo. Would you mind elaborating on this technicue of finding noisy soil? Sounds interesting and obviously worked for you. Harry

Hi there Shiraz.
The noisy soil bit,well it was the first time I had used the detector.Did the settings and gb that a friend suggested and started wand waving as he calls it.Got a target but it sounded again as I was was trying to pin point like not in the same particular spot.Richie got out his unused pinpointer and got multiple beeps over about a 10 "×6" spot.We thought a bit of rusty roofing iron or somesuch bit of rubbish.
Anyway he scooped out the soil into the pan,about 3" high in the pan,then started to pan it out.We then had to leave in a hurry because of lots of shed snake skins all around that the kids saw.Not knowing what was in pan until back up north at home.Big shame but brother inlaw nows area and snake content so we listened when he said lets go.
As I said,first time out of box and first time user.Hard to explain something I know nothing about. Dave

Thanks for that Dave. Jeez that's some nice gold.