Hi,
I have also been bitten by the detecting hobby and hope to spend much of my time in the field as I am not working now. I am a newbie but already know another detectorist who has been helping me with some direction. I have bought the 5000 and I am booked for a course in a few weeks. I have been getting familiar with it and know that I have some big learning curves ahead. I have been researching many places but just havent had the opportunity for a start yet. I am worried about finding myself on private property, someone's lease or a National Park that doesnt allow prospecting! Fitting some field trips in before Christmas is also getting a bit harder than I thought. Will just have to give up some other stuff!!

We already love 4wdriving and camping so this really is an add on to what we already enjoy. We have travelled through the deserts and up the West coast and across the top. Didnt have time for panning or even thought of detecting. Had time constraints and the kids with us then. See it a bit differently now though.

I know that you more experienced people hear it all the time but I would appreciate any help or tips that got you going.

G'day Greg T and welcome to the forum and to this great hobby...

All I can really say is the three "Ps" persistence, patience and practice... Learn everything they will teach on that course... You already have got the best detector money can buy... Wish you all the luck and hope to see some nice finds in the near future...

Every state really has its own rules. In SA there's not too many places that you can go (legally) except for 2 designated fossicking areas. That's not to say there are not ways around this!

I don't know too much about the ACT ... except some vicious thoughts about the political side of the place

However, I think you will probably spend more time detecting on the NSW side of the border? Have a look here https://golddetecting.forumotion.net/f13-information-on-goldfields and just pick the State that you want information on.

Good luck on your quest, and may the Gold Gods be with you!

Welcome Greg T
This is one of the better forums around.
I totally agree with Mike 54's 3 ps and getascripter's research.
And, we will get out there, soon.

Greg T wrote:Hi,
I know that you more experienced people hear it all the time but I would appreciate any help or tips that got you going.

).
This forum will have all you need and more to get started and like Google, it is your friend.
All the best with it

Greg T.
Hi I contacted the NSW State forrest people to ask about fossicking around the ACT and got the reply blow:-


Hi Richard,
Thank you for your email.
To fossick in State forests you will require a Special Purpose Permit.
These are issued by the Region that manages that particular forest.
For forests in the Canberra area I would suggest:
Hume Region
Riverina Highlands Building
76 Capper Street Tumut
P: 6947 3911
F: 6947 2865

Also, here is some further information on fossicking.
http://www.resources.nsw.gov.au/__data/assets/pdf_file/0007/363544/A-Gui
de-to-Fossicking-in-New-South-Wales.PDF

Or perhaps RichandSue might be so kind as to copy their post into one of the above categories??

Or perhaps RichandSue might be so kind as to copy their post into one of the above categories??

Hi RichandSue ... thanks for that

It struck me immediately how brilliant that information is

I'm sure there will be LOTS of fellow members who will be really grateful to read your information!

It struck me immediately how brilliant that information is

I'm sure there will be LOTS of fellow members who will be really grateful to read your information!

Kate,
I hope so. I have not had a chance to follow it up yet but will in the future.

Thanks for the hint as better if this type of info is in one spot.

Have a good "GOLD" day
Rich

Thanks Mike, Kate, Detectist (I know who you are!) Phil and Richard (yes we have met before!) for your great welcome. I have been away for a few days but have been immersed tonight in a lot of the forum. So much to take in and absorb and make sense of. But all helpful just the same. Kate, I hadnt really thought of detecting in the ACT as I just thought you werent allowed to do anything in this state! Will you all please stop sending your politicians here we have enough local ones.

But really, most of what I am aiming for in the short term is in NSW or VIC. I always like Tuena but have never panned or detected there I used to go through on the way to Abercrombie NP for camping - that will change soon! Also, I have been reading the thread on HE at Chrissy. I have relos staying over that period but maybe able to get up there in January. I have been harassing Brad at Detect a den Batemans Bay and will be doing a course with John in that area.

Also, thinking of doing the minelab course in Talbot or Hill End so when I do one I expect to stay on in the area for a few days.

I did like the suggestion on another thread about salting a few sinkers around the yard and practising - might have the neighbours getting worried though!!

But thanks again for the assistance and suggestions.

It has been a while since I have logged on. Have to get on more often and not be so busy!! Well I did the training offered by John at Detecter Den in Batemans Bay and I found this a great way to get more understanding of the gpx. I walked some ten metres from the car and picked up my first piece of gold .32g!! Who said this was hard...talk about sheer dumb luck.

I hooked up with a friend and we went to Hill End in December just prior to Christmas for the Minelab course with Steve. More learining and some very good eye openers. Particularly the large nugget that sounded what I would call junk. Need to dig all of those screamers methinks. Although another perspective shared with me is that if it is not a penetrated signal, that is you scratch the surface and it moves then it is likely junk. This has borne out to be so true so many times but it is hard to ignore something that may be a sun baker sitting on top!! Mostly I just have to see what it is and when I dont I am left wondering what it might have been. Mind you, I have dug many boot tacks that have fallen from a deteriorated shoe in the one spot! Just to make sure...

So, after several days checking out Hill End and detecting there was no gold for me. We did go up through Tuena and had a look and tried detecting but too much junk and no nuggets. Camped at Trunkey Creek showground and had a great dinner of roast pork rolls at the pub which was easy walking distance.

Latest trip was to Wedderburn Vic and camped at the caravan park for several days and must say the hosts Andrew and Gaye were great. 35 degree days and lots of hard work and sweating. Found my second piece in a white pipe clay mullock heap and Wedderburn which went 1.03g and looks like a piece of corn or a tooth (well sort of). Spent most of our time going to Inglewood and surrounds for better prospects. Third piece is a little piece that just sounded soo good.

My fourth piece was I think novices luck. As I picked it up in a creek bed that I really liked the look of the gravels. It is my first specie and wieghed 28.8g. However there is ironstone attached that I am advised to put it in hydrochloric acid to remove. Others are guessing it may even be half an ounce when cleaned up but I am a pessimist.

Seems I cant upload photos. Cant seem to work it out and have read help. 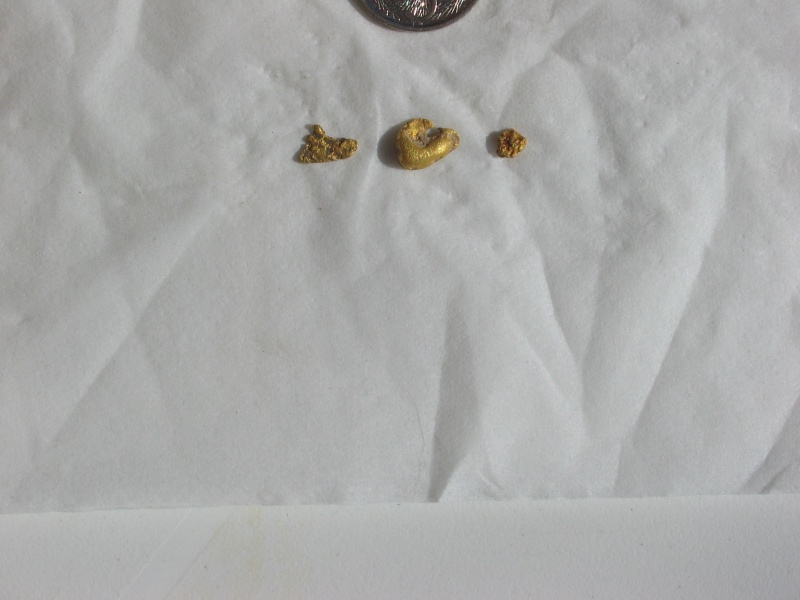 First, second and third nuggets from left to right. 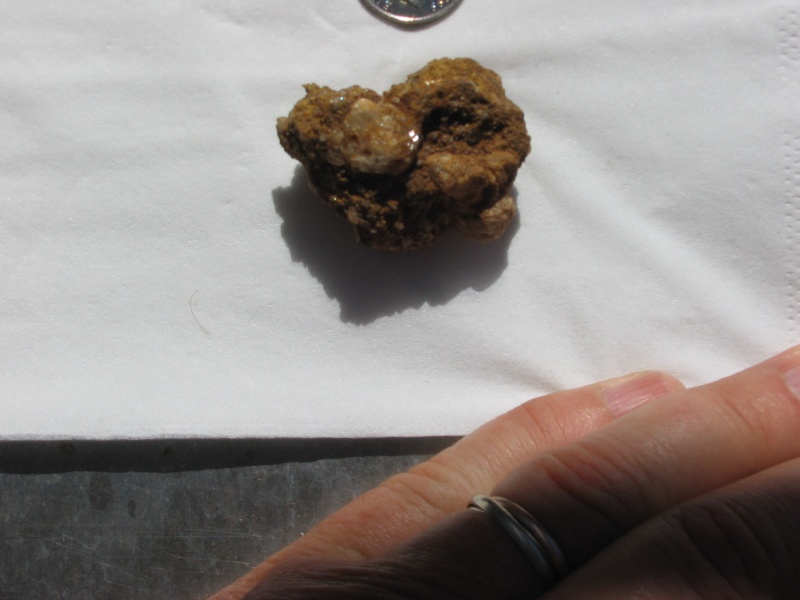 This is no 4 the specie.

G'day Greg T here is a link to show how to post photos.

Thanks for the information Mike (and to Stoppsy) - made it very simple.

Thats the start of a very nice collection mate, I bet your very pleased and you should be, by what you have said you have worked very hard to get results and it's paying off.

Thanks Dave - it can be hard work but the excitement when you land a bit of gold wipes it all away. I was out for a day this week and had no luck - in an area where I found the first piece. So I will be camping over Easter and have a plan to take my pieces and put in plastic bags and bury them as a test patch with some lead pieces and other metals. Then play a bit more with the settings of my GPX to find out what the differences will be with this approach.

Thanks too Alwyn - yes I find the encouragement and advice that many people are willing to share with a newby really helpful. Without it I would be floundering around a bit more that I have been!!