Hey everyone, ive been finding some decent placer gold down in the silt about 600mm down in some large cracks in the stone bottom.
Thats a piece of rice to judge scale, the golds not huge gold but better than a kick in the pants. Thats one days work, Ive test panned up stream and down and this is where its concentrated, so next step is having a go at the banks.

That looks great mate, keep at it. cheers Pete.

great results looks like you are in the right spot there mate , hope the gold gods shine you next trip , pays to take time to track it down

Goldmember2, good work ! Good luck having a go at the banks (LOL).

The gold came from "somewhere"...!

Goldmember2 wrote:Hey everyone, ive been finding some decent placer gold down in the silt about 600mm down in some large cracks in the stone bottom.
Thats a piece of rice to judge scale, the golds not huge gold but better than a kick in the pants. Thats one days work, Ive test panned up stream and down and this is where its concentrated, so next step is having a go at the banks.

Good gold! By now, you've worked the area pretty well (I know I would!).
How about a "follow-up"? If this gold were in the deep cracks, how would you go about getting it out? Picking at it? Blowing it out? Suction?
The silt should be no hinderance....

Sorry for the super late reply, I forgot my password, had another another bubs, and running an extremely busy construction business oh and had a good 5 or 6 trips detecting and found bloody 0.......so back to the pan
I worked the spot fairly hard both up and down, and would say the old timers wouldnt have given it a real hard crack cause the gold was in super dense clay below the silt, 200mm above bedrock. And the gold that came out was very flat and smooth in most spots.
Digging down to it usually took about 1.5 hours doing quick test pans on the way. As you know with placer gold, cracks in the bedrock running parallel to the river are prime where there are dog legs left or right to trap the gold. I might be sounding like I found sacks of the stuff but only managed 1.5 grams in about 15 trips......which Im pretty proud of :0
Just about had some different types of Nugs in the collection when I was panning up a storm and a tiger snake came up beside me for a drink.
Collecting the packed sediment was fairly easy as the cracks were worn smooth and were about as wide as your hand, so two pairs of gloves and a small garden shovel works a treat. When pulling out bigger rocks always do it really slowly and collect all loose sediment under them, cause the gold will congregate there as well. In another wash out in the triangle, the gold was quite close to the top in some spots, especially under rocks about the size of two dinner plates. My biggest specci was found under the lee-side of a rock about the size of half a small car. I had to dig down 900mm and nearlly needed a snorkel before I found gold.
After 50-60 trips you start getting pretty good at finding where gold will congregate, just by looking at the shape and depth of a rock and how the water washes over it. One wash-out I worked had nothing up or down other than a few tiny specs, as it came out of the hills and flattened out the bedrock had creases running at right angles to the flow like a natural baffle, and as I walked by Im thought I saw a twinkle....... there was only maybe a cup of sand in the crease and in one pan I got 9 tiny nugs out of it!
Im hoping to get out again and start hunting for some new spots, as the ones I had are fully worked.
Heres 80% of the collection, hope I can remember how to post a pic. 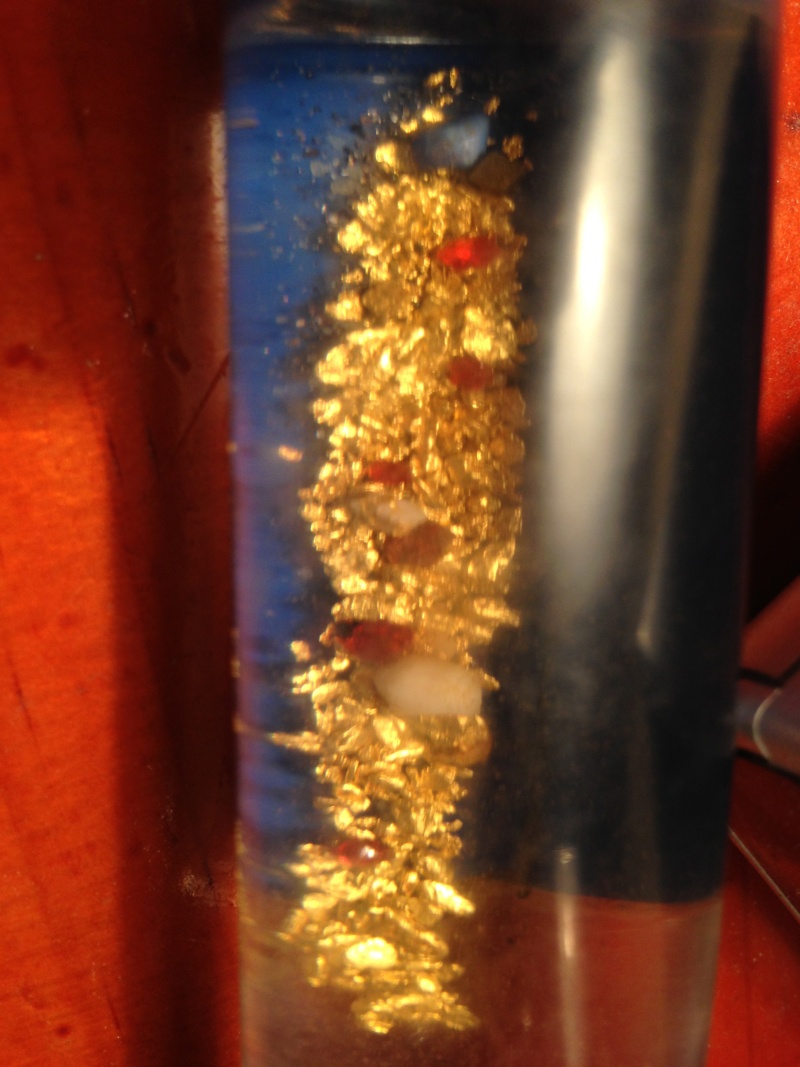