I was doing the flea-bay surf before my shift today and received an email from Bendigo Gold World advertising this one:

What an interesting idea. Now for the sticky bit ... Has anyone bought one or used one? Any comments? Personally I thought it was a good, cheap back-up option, but I would question the performance capabilities of a 'Flexible solar panel'

That said, I still think that if it does the job then it's a great idea. 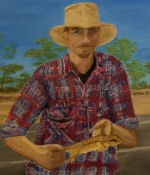 In my opinion this is impractical and a total waste of money; an exception may be in cases where you are not within the proximity of a vehicle. The Minelab battery pack (GPX series) has a very good integral charging and balancing circuit an will not rob much energy from a car/4WD battery which is in good condition.

If your detector is an older one which uses 12V/6V lead acid batteries then you'll need a DC-DC charger such as the one linked to below, although you can find them for much cheaper if you hunt around a little.

The Wllsee MPPT regulator are by far the worst regulators iv read about, on a system that small a standard PWM controller would be fine.

You would be better off spending the $$ on a 60-80W panel to charge a larger battery that is able to charge/run a range of appliances.... then spend that sort of money on a Mission imposable once in a lifetime event, where you trekked into the bush a klm from your ride, got lost and resorted to using it to charge your detector battery, to then pull apart and short circuit it in order to light a fire using the few strands of date loaf you scrunched up in your back pack in the event of having to wipe your sorry ass in case you got lost in the jungles of the golden triangle.

Only to then be found by a parks ranger and fined on the spot for having on your person a metal detector in a national park you had no idea you were in because you were lost....yeah sure!! would be the reply from the ranger, who is also writing you a number of infringements for having your vehicle parked on a no go zone 50mtrs away to your left, for obstructing the right of the wildlife in that conservation area.

Not to mention the damage caused to the fauna for lighting a fire. !!

Dunno Pete, it could be a must have item for the many iv seen dress up like Rambo for a few hrs detecting.

However, both you and i would benefit more from carrying a solar powered winch.

Got to get one, cos if I don’t have it I might need it.

Or IT might end up in the seldom opened plastic box, we carry,

Put it at about the same level as the invention of light beer.
All in jest, ACTIV8

And this is why I love this forum!!!