Zest for the west

Zest for the west

Gday all out there in vertual gold fever land.About 3 months ago a friend off mine called and said he needed an offsider for some work around dalby condamine oakey and chinchilla.At first the work was a little inconsistant and a bit of bush walking and fishing was done. One particular day we were trying to escape the heat and Bunya was calling, we walked up a creek and found ourselves looking for gold.We didnt find anything except a small clear crystal of some sort, but since then gold has been on our minds.Without doing any research we ordered a fisher gold bug pro,it arrived two days ago so we are heading out a couple of days early this week.By chance i found this awsome site but it looks like our area may be barren or as i said to my this morning unknown

.We may head to kilkeven or around blackbutt yarraman om the way out. Does anyone know of gold arond condamine or surrounding as i cant see why it would be west off the ranges unless it is so deep under the fertile soils.Dalby area is like a below sea level plateau.My mate and i camp out every night after work and it is quite nice out there , but we have caught enough carp and its time to do some detecting.Thanks for any info and will let you know how we go. 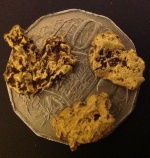 Re: Zest for the west

i cant answer your questions unfortunately, because im here in vic. But i completely agree with you that id rather be getting gold than carp too, lol.

Good luck with the gold hunting