Not much but at least it's a find.

Not much but at least it's a find.

It’s been so long since anyone posted a find I thought I would do so even though it’s not much to show.

I went out on the 27th of February.

I fought my way past some saplings into some more open ground and got a super loud signal. It was obviously on the surface. I scraped the surface and still in the ground. A good scrape with the pick and it was still there. It was so loud that it was obviously rubbish, but I kept telling myself that if it was gold I didn’t want to nick it with the pick. I dug around the edges of the signal but it hadn’t moved. Some more digging around the edges and it was still there. I can’t remember exactly what I did then but I must have scraped the surface again with the pick. When I put the coil over the area it had moved.

I could then see a shape that looked out of place, like a piece of that blocky slaty rock you get in the goldfields. I picked it up and waved it over the coil and got a blast in the ears. It was so grey I was sure it was lead. I rubbed it but still looked like lead. A couple more rubs and no change so I put some water over it. Now it’s gold. Excellent. Looked like it should go an ounce.

I now carry a set of scales in my pack so I switched them on and put the piece on the scales. Just over 100 grams. That couldn’t be right. I started again and tared the scales and again it showed just over 100 grams.
What a potty mouth I have. I couldn’t believe it. 3.22 ounces of gold. It was a solid slug, not pretty but SOLID. As for the rest of the day I spent searching the immediate area but nothing more. 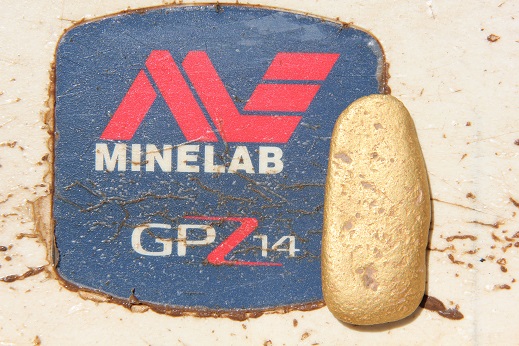 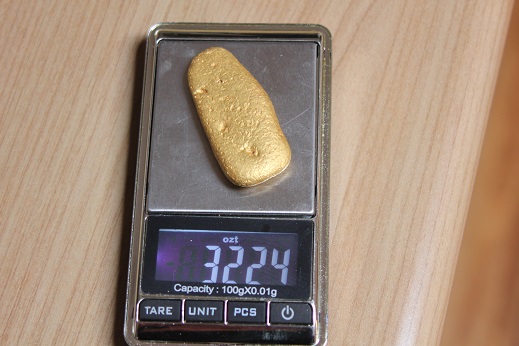 There wasn’t a great deal of recent activity there but I can see why it was left behind. 10 metres to the left there were empty .22 cases all over the place. Behind me there were several rusty cans. Not far from where I got the nugget I dug up a rusty lid.

I’m sure someone must have detected it and dismissed it as rubbish, something I probably would have done had I gone over those rubbish areas before getting to the nugget. Thankfully this one had my name written all over it. I was disappointed that I still found only one piece for the day.

Everyone I show the nugget to asks if I have melted down all my little pieces, but no I haven’t. I thought that maybe it had been done by a digger during the gold rush and he had lost it, but it doesn’t look like it. I have checked it over with a loupe and it is definitely not cast gold. It’s all natural.

I went back and where the empty cartridge cases were I found 5 projectiles. It looks like someone just stood there and fired 5 shots into the same spot. Nothing else was found.

I did put in on the Minelab website for Find of the Month while I was in Perth.

Very nice mate and a great example of why you should not dismiss a big signal as rubbish.
Interesting shape, flat and worn smooth ish. Looks like it has travelled some distance and maybe from a shallow lead

Nice going Axtyr,it's sometimes worth persevering in those junky areas,great find.
It would make a nice bling necklace or if desperate a gold TOOTH

Well done on your find. Would have loved to see the smile on your dial too. Maybe not pretty, but gold all the same.

Bloody hell you done well there ax, in my opinion some of the most beautiful vic gold is the flat waterworn stuff.the texture of yours looks a bit scaly, when there are smooth that’s the ultimate.congrats!

You would have to be happy with that nice slug.

Thanks for sharing your nice find. 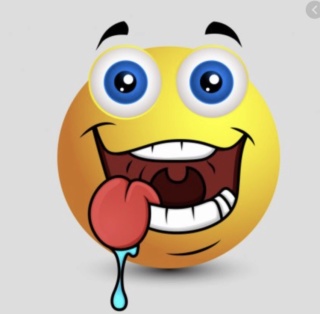 Congrats on such a fantastic find!!!!!

Persistance pays off when you're detecting amongst the junk

OMG. When I first seen the photo I thought it was a few grams ( not familiar with the size of the coil in the photo ). Super jealous and feel bad for walking away from rubbish piles in the past. But that said it’s so demoralising digging rubbish all day. Congratulations and thanks for sharing. I might go charge my battery for when restrictions lift.

I will never dismiss anything as being a 22 bullet again.

well done Axtyr, nice slug of gold and great story to go along with it.

And when a nugget has your name on it there is nothing you can do about it except dig it up.

I know what your saying if your at a spot and getting rubbish first and for awhile it is easy to pass on a big loud signal as just more rubbish and move on. And when it happens that the nugget come out first and then rubbish I just shake my head and say how the hell did that happen.