Nobody gets it all

Nobody gets it all

Some items that I have detected with the SST at Pine Island over the past 4 days.
I know somebody is tecting there most days because I see their tracks in the sand.
You are missing some good items (not inc the paper clip n zipper)  whoever you are. Maybe slow down a bit and overlap your sweeps a bit or adjust yer disc down a bit.aye? 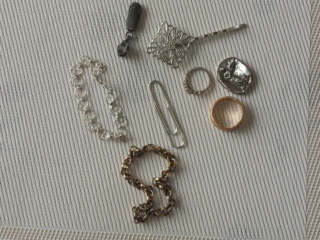 Mmmm, must go back there one day. Putting my feet+ in the water was nice.

Good finds for a 2nd pass over.

The SST is so easy to use and it does not miss much. Still found a few long lost coins along with those items in the pic.
There are still a couple of places I have not detected along that river coz I need a dingy to get to them. Maybe I will get a blow up one and give it a go.

I wonder how long it will be before they ruin Pine Island by building units along the river?  Last year I was there when a small crowd of Muslims with clip boards and cameras were taking plenty of pics of the grounds on either side of the main beach area. Nice place for a Mosque aye.

....Try building your house down there and see how far you get.

That's for sure Adrian, nobody does get it all. There's always something in the ground (or sand) awaiting to be discovered.

Yep no doubt about it.
Pine Island is only 10 minutes from my house and I have used almost every metal detector I have owned down there since 1980 when I came to Canberra.

Almost any detector will work there with the exception of doing the rocky areas or in the river itself where you will need WP and/or a good ground bal range VLF. PIs work fine but there is a lot of junk in the ground there due to it being a Picnic area and Man o man do people toss all sorts of thing away just being too lazy to take there junk home. You name I have found it there from crap filled baby nappies jammed down between the rocks and also just buried in the sand. to bongs, needles, broken bottles deliberately stuck beneath the sand with the jagged glass edges pointing upwards. Uncountable bottle tops and ring pulls, bobby pins buried drink cans, even a pair of hand cuffs many knives (It is a fishing area) enough lead sinkers to sink the Titanic.

To name just a few of the tectas That I have used at Pine Island. The machines that were the most successful at finding jewellery there are the Sov XS, The Sov did exceptionally well in the river and I did not drop it once.

Whites XLT(a magic machine) Lobo Super Traq, Gold Bug Pro DP, SST, and my old GS 15000 did a pretty fair job also..
My latest toy, the little but well performing Tesoro Mojave is doing alright and pings small gold chains OK but not fantastically great.
I find that the SST handles high iron minerals near on as well as the Gold Bug pro. I think the SST has only ever been available in Australia although I am not totally sure of that. It was a limited run for Jimmy Sierra and you will not find many used ones up for sale. Nice detector that works well from the beach to the gold fields. Sort of a trimmed down MXT.
A couple of the Jack lang Snoop range worked very well there also. as did The old bounty Hunter land star and a Whites 6000DI Series 3 with deadly accurate TID found a ton of good stuff.

Of the tectas that I have mentioned I think that The Old Sov XS is still one of the best general purpose and beach machines that Minelab have ever made.

We done mate. Something a little different.
wombat