After trying Gumvale Station, without success, I had 1 1/2 days to try detecting the Town Common.  First off, paid $10 pm for a permit purchased at TJ’s Roadhouse then simply drove around looking for a spot to try. Basically, the town common area was explained as — there are cattle grids that surround the township to keep stock out, then drive in either direction, if/when you reach a second grid then that’s the end of the Common. So, detect anywhere between the two grids.

I started one afternoon around 1 pm and parked at the top of a small ridge that was scattered with quartz and noticed what looked like a bob cat push marks. I saw someone else had dug some shallow holes & from what I have read, Tibooburra Common is known for small nuggets.  Got the GPZ 7000 going and went around the run off areas and picked up two tiny, wafer thin nuggets.

Next day, I drove to a different spot from where I could see town buildings, and what looked like a large gully between rocky ridges.  After about 2 hours, I got a faint signal before everything was drowned out by an aircraft taking off. I waited patiently and picked up the signal and got a nice larger piece.  After lunch, I detected in the same area and got one more tiny speck nugget.

So, I was pretty happy in all - one of those bucket list things to detect at Tibooburra. 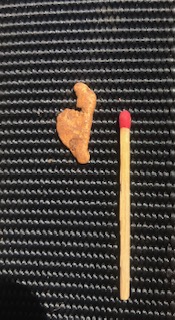 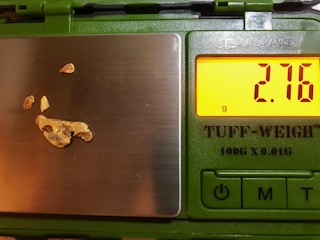 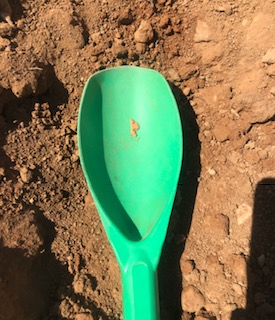 Good work Annie. While its ticked off your bucket list, would you go back? We camped on Gumvale for 11 nights and quite enjoyed it.

Annie, nice picture and write up. And a nice 2.5g nuggy to. Tibooburra is a nice spot and it seems that on the common area the tiddlers seem to just be dropped from high up in the sky. No real rhyme or reason where they are. Detecting there is a good learning curve and you need to be tuned into your detector and understand its noise made and the way it talks to you to find the tiddlers. A top spot.

Thanks for the comments.

Detectist wrote:Good work Annie.  While its ticked off your bucket list, would you go back?  We camped on Gumvale for 11 nights and quite enjoyed it.

Detectist, it is a long way to travel to for me so I would be unlikely to go back.  If I did, I’d probably give Mt Stuart Station a go. I’ve had better luck at Clermont where I got 94.66 grams earlier this year.

Did you find any gold at Gumvale?

[/quote]Detectist, it is a long way to travel to for me so I would be unlikely to go back.  If I did, I’d probably give Mt Stuart Station a go. I’ve had better luck at Clermont where I got 94.66 grams earlier this year.

Did you find any gold at Gumvale?[/quote]

You did well at Clermont. I've only heard discontent recently from people who've gone there although I've also heard about some very lucky people in non-GPA areas.

I like Tib but it is also a fair way for me to go as well. But having said that, I've now been 3 times (over about 6 years), camping twice on Gumvale and once on Mt Stuart. I found gold easier on Mt Stuart but the gold we found on Gumvale was slightly larger. Takes a long time though and a lot of walking. And having said all that, the gold we found this year was half the number of the previous trip. I've only found the odd one or two bits on the Common but there are lots of areas there I've not looked at. We prefer more of the quietness on Gumvale where you might only see one or two prospectors a day.

Thanks Detectist. Yes, it is a fair way from Canberra.

My next stop detecting will be my home town, Moruya, over Christmas. I’ve yet to find any around Mogo or Nerrigundah.

its been a While

I work fifo and work in the oil fields about 160km from Tiboorburra so close yet so far......nice nuggs Annie 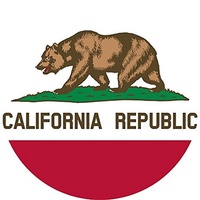 Alchemy wrote:I work fifo and work in the oil fields about 160km from Tiboorburra so close yet so far......nice nuggs Annie

....and you never have your UHF on

bicter, you are always welcome to take at least one left on the warry gate road, straight to my camp, if you hit the Noccundra hotel you've gone too far bahaha

UHF 40 ALWAYS ON EXCEPT WHEN IN THE CRAPPER