Thinking of the people that are being affected by Hurricane Irma

Looks like they are not out of the woods yet. 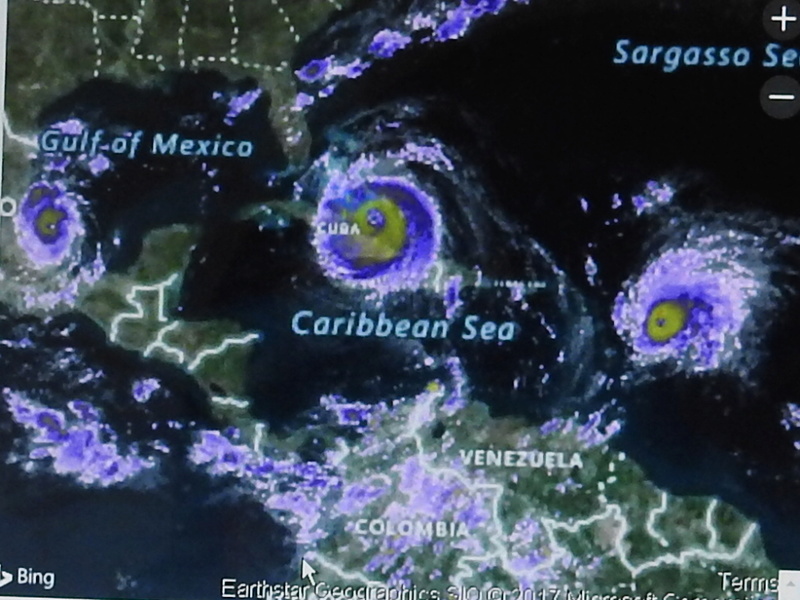 I have a Few internet friends that are in Irma'a path..
They say its been down graded to a cat 4, still bad though.
Seems it will hit them monday.
I am hoping Irma turns and goes out to sea

I feel for all the affected people over there

Play this and you may get an idea where it will go.
https://www.accuweather.com/en/world/satellite

Thanks Adrian
My silly internet is playing up, i tried watching, got sound no pic
Will try again later.

G'Day Everyone Hurricane Irma back up to cat 5 no stopping it now god help every one in it's path. cheers lonewolf.

I thought it was going to head into the Gulf of Mexico but apparently it is heading to Florida. Be interesting to see what happens to the next one following Irma.

Irma has been downgraded to cat 2. Cyclone Debbie that hit Ailie Beach earlier this year was cat 5 with winds over 300kmh.

granite2 wrote:Irma has been downgraded to cat 2. Cyclone Debbie that hit Ailie Beach earlier this year was cat 5 with winds over 300kmh.

Hi Jim
When was Irma down graded to a cat 2?

It was on TV this morning. A lot of relieved people over there.

granite2 wrote:Irma has been downgraded to cat 2. Cyclone Debbie that hit Ailie Beach earlier this year was cat 5 with winds over 300kmh.

When you rely almost totally  on wind and solar power then you can expect total power failure during severe storms.

if this country is to survive with an ever increasing larger population and be able to maintain electric power at an affordable cost to the general population and without crippling our economy then we need nuclear power and Hydro Electric power and Coal powered electricity.
Even if it means we put a bit of pollution into the atmosphere (microscopic compared to other countries of equiv area and population) then that is what we will have to do. If we do not then this country will fall into the greatest recession it has ever known and we will become totally dependent on outside/overseas products.

If Australia shut down all of our atmospheric pollution producing industry tomorrow. In 12 months there would be no measurable change in the worlds total pollution levels and zero alteration to Climate change. but there would be massive degradation of our living standards...Australia is becoming insignificant in the grand scheme of things since Globalisation.

granite2 wrote:It was on TV this morning. A lot of relieved people over there.