A True Gold Detecting Story’
Some Months I took a very close friend of mine out into the bush
Gold Detecting, we drove along side of the range and down the slope
I stopped beside a small stream, watching the ground for piles of rocks
That were raked up some 100 years ago, we both opened the doors & got out to inspect the ground further ‘My Friend asked me ‘Why Did I stop here.
I replied’ see the rocks all raked up into piles, being dry blowing dumps The Old Timers we’re here testing the ground for nuggets.
My friend quickly replied ‘that’s not prospectors who done that?
Well who done it then I asked’
It’s been done by a pebble mouse gathering rocks to build a nest he said’
So then I comment gee whizz all the years I have known you mate and now
Your talking crap aye’ After we detected awhile and both met up back at the 4 wheel drive and began talking again about this elusive pebble mouse who must have been some big huge a** mouse to move ironstone rocks more than 3 times his own body weight ‘ sticking them into large piles upon the surface’
I said hey mate maybe I was wrong and you are right this time ‘
He immediately said’ oh you believe me now huh ‘yeah sure I replied ‘
Why did you change your mind then he asked again? Well mate when I walked over yonder I seen a spot where this giant size pebble mouse sat down and opened tins & had a meal he even got on the booze too, I have changed my mind and your right,
This mouse must have been on steroids to shift that pile of rocks aye ‘
I named my friend now after that episode ‘The Old Pebble Mouse’-----GFE'

its funny my mate and i have a similar thing going, he thinks i am a ***** for believing in this mysterious pebble mouse thing.
they are true aren't they

Hi Hoolahoopa,
well yes they are real if you get time do some research about them.
Anyhow they do live in certain parts around Australia, But far as I have read they cannot carry big stones
There nest looks like it's made up with fine smaller stones, spreading about the size of a dinner plate '
I couldn't see them hauling big iron stones into a heap ' Carrying a load far greater than his weight unless he was on
Steroids ' So yes they are real Cheers for now GFE '
.

The Pebble Mice do exist but it is no way they are responsible for the 1 1/2 - 2 metre diameter mounds found through out the WA goldfields. We call them mini volcanoes and many times gold has been found in the vicinity, another explanation is they are "pipes/fissures" formed when the earth was forming.
Have made several attempts trying to get the experts to positively identify them, to date, too hard basket and they revert to work of titanic pebble mice theory.
Rocks unfamiliar to the area brought in many times the size and weight of mice?????? 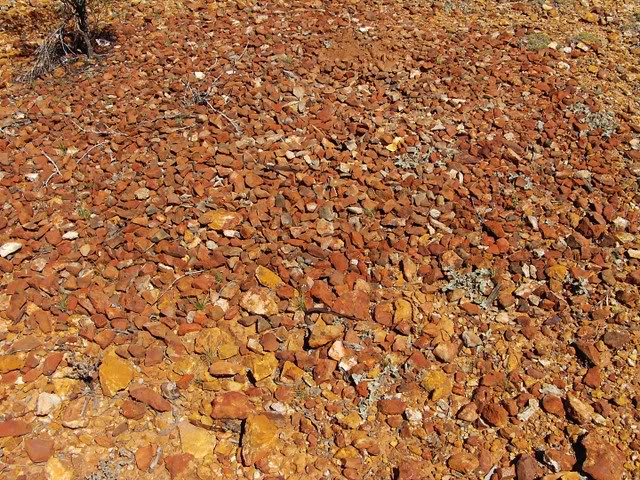 Howdy ya
well I don't recall ever seeing a giant pebble mouse either in the dark or day yet '
There are many small mounds (Domes) out in the scrub that a lot of people thing think the elusive pebble mouse has built too-LoL
To me this dome Hill looks natural just as a big hill does with rocks spread over it evenly '
All the searching for info on the Pebble Mouse I have seen are fine stones which they can carry along inside its mouth
Building its nest beneath for protection I guess, Anyhow I always find others thoughts interesting to what they believe & see in the scrub
I will cut this post short as I am packing up now to head on out for the day cheers to all ...Have A Good One GFE

Nightjar wrote:The Pebble Mice do exist but it is no way they are responsible for the 1 1/2 - 2 metre diameter mounds found through out the WA goldfields. We call them mini volcanoes and many times gold has been found in the vicinity, another explanation is they are "pipes/fissures" formed when the earth was forming.
Have made several attempts trying to get the experts to positively identify them, to date, too hard basket and they revert to work of titanic pebble mice theory.
Rocks unfamiliar to the area brought in many times the size and weight of mice??????

Hi Nightjar
We have seen many of these small mounds, at first we thought, the old timers had been here, looks like small dry blower heaps..
But nah! The rocks are mixed together, large and small.. Also no evidence of tin cans or anything about to even suggest any mining actively was done..
So it's  a mystery to us also..
Young bloke came up with the theory that maybe it was when it was all under the ocean and it was formed from the water action

well what about this theory, it could be true '
maybe the Pebble Mice all worked & pitched in together shifting great loads of rocks in a frenzy'
just like the people did years ago when they built the pyramids /
And the whole reason was to trick the prospectors into the future

Could it be that these stones  were collected together by a now  defunct animal an extinct one , unless something moved the stones they would stay  in that spot  for a very long time  !

Generally these mounds give a strong signal. Many years back we tried digging one out, after a metre or so of hard slog we gave it away and then formed the opinion that they are definitely pipes.

well I cant say that I have ever tried to dig one myself'
the one in the picture below looks different to me although I have seen many of them
it sure is interesting tho to know more about them ,
I have read many books on pipes but never seen a picture yet
anyhow cheers to all .GFE


May also be linked to dead Fumaroles, West Australian geology is approximately 3.5 billion years old, it is only a guess what was happening back then.

"Fumarole, vent in the Earth’s surface from which steam and volcanic gases are emitted. The major source of the water vapour emitted by fumaroles is groundwater heated by bodies of magma lying relatively close to the surface. Carbon dioxide, sulfur dioxide, and hydrogen sulfide are usually emitted directly from the magma. Fumaroles are often present on active volcanoes during periods of relative quiet between eruptions.

Hey well that was rather interesting nightjar , thanks for that.
are you located in western Australia coz I didn't look where you are'
I have another type of question ' In your travels have you ever found any gold around moss where it
gathers on rocks /Trees - I just want know your answer cheers and thanks GFE

GFE,
We have never found gold associated with moss but I do know of an area that indigenous woman folk specked many ounces, most of the gold was covered in moss as well.
They did a damn good job because we did not get a speck when we detected the area.

Well thanks for your reply again Night'
let me ask first ,what you said about the ladies who were speckin' the gold
was that the same location they said it was & and they told you '
just asking this to make sure the location was 100% 'As you know how gold stories begin, Or held back until patch is finished hehe

I am no expert on the soils & minerals, so I aren't the full bottle on it all ' But I do know where and what kind of ground I seek gold from
mostly ' The reason I asked you about the moss being I have never picked up any gold near or beside moss '
so in my mind I have always wondered why not ' The only thing I could come up with, was that firstly moss likes moisture to grow
I see moss growing where the water gets caught up around /rocks/ trees & Sulfur/minerals is found around where the gold is located
and maybe it would kill the moss and wouldn't be able to grow ' so how I see it so far until I find some gold around the moss
that would make me change my mind , Anyhow I hope you can read what I am trying to say 'I had a tough day out in the sticks
and only just got back home a hour ago ' cheers for now GFE

100%, without any doubt, actually saw and handled some of the gold back in the early 90's. All the exposed gold was covered with moss (sunbakers in the shade). Was in amongst a grove of mulga only 100+ metres from deep ground running down to a large creek (Dry most of the year but a raging torrent when a depression rolled through).