I have had a big cat encounter whilst prospecting in fryerstown victoria about 13 years ago around the year 2000 near chewton.

Not sure what sort of cat we were dealing with as we never got to see it only hear it, this is our story! down in a creekbed full of blackberries and overburden which we had entered some hours earlier that day! on the return following the track out that we earlier traversed in, cutting through thick overburden following a game trail near a huge drain almost back at our car, we were stopped dead in our tracks by a hair raising, blood curdling, repetitive, very deep and loud knarling coming out from behind the thick overburden on the side of track, we paused for about 30 seconds then we started trying to move forward again the knarling became more intensified and got louder, so we carefully backed up the track, turned around, pi#sing and sh@t*ing down the backs of our legs, and ran for mercy. This turned out to be one of the most ridiculous afternoons trying to relocate a new way back to the car albeit that once we got back around to the car we were back to back looking for this beast as it was right near the car we heard this we lept in and screamed off home.

Strange thing was 30 mins before this happened some 200 metres away i had just found my first piece of gold ever using a coin machine which was a half ounce specie and it was the first time i had gone out actually gold prospecting.

In 2005 a couple sighted what they claim was a panther just up the road right near where i had my encounter, exert from the website below,

Back in October 2005 my wife and I were holidaying in Victoria, one Sunday afternoon we stopped by the roadside to take a photo of the old beehive site,this area is located between Fryerstown and Chewton,( not far from Vaughan Springs). We were setting up to take the picture when we noticed a big black animal near the side of the road,my wife the remarked " thats a big black cat" the animal moved into a gully then into a huge briar or prickle bush area.

You could see that the animal was cat like by its movement,"like a crouched creeping movement" then vanished into the briars. We could not believe what we had just seen.
On that particular day there had been a press release in the "herald sun" showing some guy who cliamed he had shot a large cat in the Gippsland area,and we thought that if we had reported the sighting we may have been deemed as "crack pots" trying to muscle in on the media junket. which was all about big cat siding.

I find it interesting though that a previous sighting had been reported from the Vaughan Springs area,which is only a few Ks from our sighting.

My wife and I live in Alice Springs where there have been several reports of large cats living in this arid area,general consensus is that these cats have been feral and have mutated into larger species over the years,sometime ago I found the remains of a cat which had been electrocuted at a Transformer site and its skeletal remains were quite large especially its head and at that time I thought the remains were too large to be a feral cat.

I have met a guy who has frequented the castlemaine and associated area's for over 20 years prospecting, who has large cat claw castings, i have also witnessed the photos of the claw marks he casted, which are the size of a small dinner plate from the bottom of a creek bed in soft clay near spring gully area very close to Fryerstown, about 3 years ago, so if your out there be careful and take precautions ;-) I now sport a 12ga double barrel coach gun loaded with 1oz slugs, when i'm prospecting around those areas for this reason.

Touch wood, i have had no further encounters to date,

P.s here is another sighting i just found then :-)

In 1976 I was staying at the Vaughan Springs Caravan Park. I was camped with a friend and we would go shooting rabbits in the surrounding country. One morning I went shooting alone down in an area close to the caravan park that was dotted with old mine shafts. I had a single barrelled shotgun loaded for rabbit over my shoulder. I was trying to walk as softly as possible but there was a lot of leaf litter on the ground, which made that difficult. I started hearing footsteps from behind and to my left side and initially thought it was my mate who had said he was sleeping in that morning having a bit of a prank. I kept stopping and looking back but could not see anything. After I had stopped about four times I stopped again, this time the footsteps got quicker. I saw a large pure black panther running straight at me at a distance of about 25 metres. I turned and faced it but I don't think I even started to swing the shotgun down from my shoulder as I was so shocked at what I saw. The panther suddenly veered off when it was about 5 metres from me. I watched as it jumped a fallen log and ran out of sight. I walked back to camp and told my friend what had happened. He didn't believe me. When I went home I told my sister. She didn't believe me. I was 16 at the time, didn't know about any quests to find big cats etc., I accepted that what I had experienced was hard for others to accept so I just didn't tell anybody else for years.

Dear Paul - Here is an experience I had with a Big Cat a couple of years ago.

In 1996 I transferred my job from Perth to St Arnaud in Victoria. As an employee of the Department of Natural Resources & Environment I have heard many tales about the mysterious puma which has been seen around the district. To be honest I never believed any of them, the idea seemed preposterous to me.

In early 1997 a friend of mine claimed to have seen one of these creatures near his property in Elphinstone. My response on hearing his story was "I guess he (the cat) flew in on a UFO." Less than a year later I had to eat my hat.

It was a Saturday night around 7.30pm in December 1997. I was travelling on Harcourt North Road in a North Easterly direction when suddenly a large black animal leapt the fence on my left about 50 feet in front of me. It seemed to travel a vast distance in a single leap and was moving very quickly, it had a very muscular body and a long straight tail.

Although it was gone in a moment I have no doubt it was a large feline that I saw. Part of my job includes regular rabbit transects by spot light, subsequently I have a broad knowledge of local fauna and can identify foxes, feral cats and most native animals by the colour of their eyes in the spotlight from 100's of metres away.

I love these sightings , my grandparents use to own the old all fit training camp in Bacchus marsh, before that it was the old lions park own by one of the big circus mobs, and my pop and uncle seen a couple of times a really large cat like creature but recon it was more dog in size, found rather big foot prints in mud in the old huts, but they never managed to shoot it,

In the 1980's in the days of the "green machine" I was detecting in the back blocks of Wedderbvurn and going down a narrow gully I not only saw wallaby prints in the soft mud but also the largest claw marks I had ever seen.. Keeping a wary eye open I continued on to where the gully opened out and laying on its side was large wallaby with a great hole torn in its side and a kidney hanging out... All the tracks looked as though the scuffle occurred that morning,, needles to say I kept two wary eyes open..
Some weeks later in another area at about 11 am I spotted a strange looking big cat, mottled orange and grey aand black hanging over a limb of a tall big tree.. It was resting against the trunk with its front and rear legs either side of the large limb. It struck me that I couldn't recall ever seeing a domestic cat resting in that position. I t was much larger than a domestic cat and although it didn't move it kept a steady gaze on me.. The old adage came to mind : let sleeping dogs lie,, so I wander off... noyungan 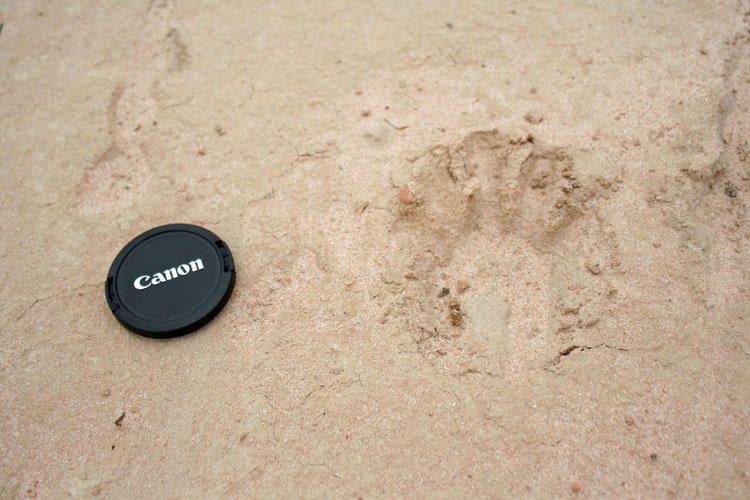 Here's one that's got me curious Noyungan - no claws, chasing a small roo, and the lense cap is 6.2 centimetres (2 1/2 inches across). 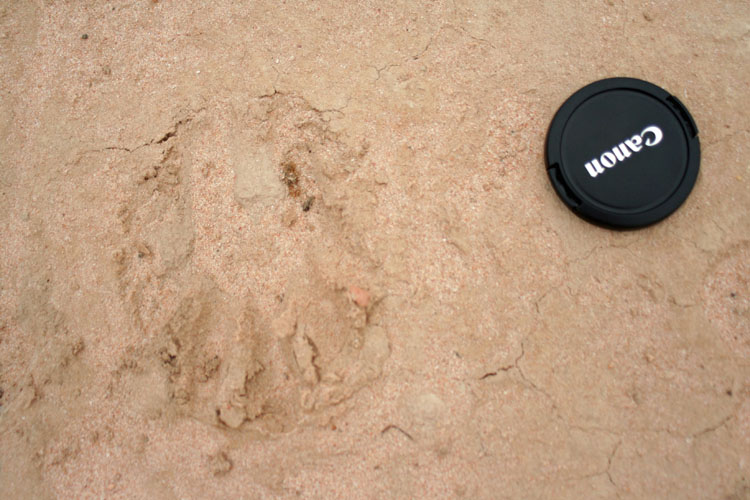