The Daze of Wedderburn

The Daze of Wedderburn

Wet day here so a bit of history, got here in late '79 with my beaut Whites 5000 D, could not find a nugget if some one had put one between my toes. but, boy, was I to learn fast. On the wall in the W/burn pub is a huge mural/photo board showing our history from about 1980, there are photos of old, some deceased, characters holding their latest finds, 5-8-15-25 oz plus nuggets (no small rubbish). Now a few of these people were shire council workers that in a very short period became local legends. they run rings around us, but how could they, we were the guns!!!!. Well as people started getting large nuggets from areas like, Queens,Pooles,Frenchmans, Potters and Schummans Gullies to name a few, so, some of the shire workers thought, hang on, we have been carting out road gravel from those areas for 30 odd years so the smart ones armed themselves with basic units ond out they went, miles and miles from town, up country lanes, farm access roads and backtracks, and, over time into town came the nuggets. The shire council never did figure out why these gravel roads potholed, it was a riot, but word got out and in the early 1980's in came the bulldozers to Queens Gully and all the rest. Things were never to be the same. I think it was in 1984 or 85 they had a show and Not!!! tell of your best nugget for the week in the W/Burn pub on the friday night, spread out on the pool table (watched by the owners) was a Million Dollars value of nuggets, what a sight, never to be seen again. The smallest nugget on the pool table was MINE, and IT was 10ozs. Well the rest is all down hill over the next decade, with the exception when a company from SA called Minelab introduced the 15000 model, what a revelation, the FIRST detector that could handle our hot ironstone areas, and so we had another rush, then the auto balance 16000 etc dragged things on slowly until, in early 1995 we were lucky to get 2 of the first 4 SD 2000's in the area, and then it was to happen, OMG. but that's another story for the next wet day.

The DAZE OF WEDDERBURN

It must have been a sight to behold...such large nuggets spread across a pool table...I still would like to dream that i may come across a small nugget like your 10 ouncer

Dream on dream on...but at least i can still find a nice multi gram bit now and then

THE DAZE OF WEDDERBURN 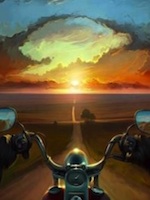 Interesting read Wedderburn and it's good to hear of the good old days by one of the locals.
When I first started detecting for gold a very good old friend of mine always told stories of his prospecting days in Wedderburn and he was with a group who had a working lease in Beggery hills, they did very well and the largest nugget the doser uncovered was just over 500oz.
His back is gone now but after constantly hearing of my lack of luck detecting in SA he offered to do a short trip with me over to Wedderburn to his old spot. we found no gold and he couldn't believe how the place changed, the surface level had been further worked and the ground level was well below when he left it and not a target anywhere.
The nugget at the top left hand side of this forum page was given to me by him and was found at this spot.
Anyway it's a magic place and the mineralisation in this area has to be seen to be believed.
There is a museum in the main st but it's always been closed when I have called through.
Cheers Mark

Thanks Mark, yes Beggary Hills is a horror to some, I know the gent you are referring toa legend, I must say, in 30 years I found one nugget at 12 pennyweights, others did well, ***** HC, in 1980 3 kids from the local high school found a 76 oz nugget with a battery powered toy wand. After that for years Beggary Hills had so many people climbing around it looked like Saigon Airport the day the Yanks pulled out of Nam.C YA

Thank you for the remembrances,
those must have been amazing days and wonderful memories.

Hi from Neale in Biloela Queensland

Hi
Thank you for the great story.
The best thing about a rainy day
Regards Neale

Thanks wedderburn for your storys on times past in and around Wedderburn, hope its still rainning so you can post up some more.

Thanks wedderburn, some exciting stories there!
wish i had been involved back in 1995!
cheers
GM