Hi Guys, I got a PM from one of our members during the week. I wont give his name. Apparently we had a conversation about 3 years ago where I said to him if your ever over this way to look me up. Well he was in NZ for 3 weeks & was currently in Wanaka & how far away was I from there. He was keen to come with me as an observer on one of my detecting missions. He was here on business & his only free day was going to be Saturday & was I ok with him tagging along if I was going to go out detecting. No worries I said, in fact you can use my 4500. He was rapt with that as he runs a 4500 back in Victoria. I am only about an hour away from Wanaka so it was arranged that I would pick him up at 9 am.
I took him on a bit of a tour before we hit a detecting spot. Showed him a few historic places of interest to do with gold which he enjoyed. I got him all rigged up with the 4500 & 11" Elite & he was off. He disappeared over a ridge & was gone. So I just went about my business with the Zed. We were in amongst old timer diggings & their  prospect holes & throw out piles. After about 20 minutes I got a very faint signal & after a few scrapes & bit of fluffing about it became 3 signals. 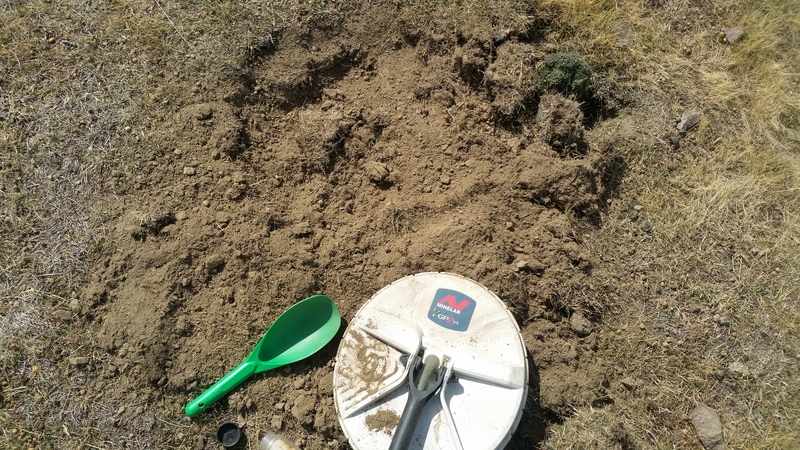 They werent far down but were all gold. Ye Ha 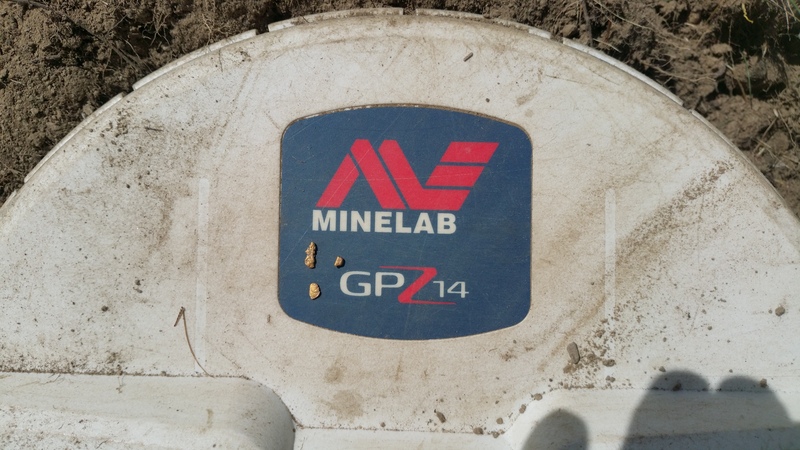 I then got my share of shot gun pellets & .22 shells & lead bullet heads. Glenn came wondering back for a drink & bite to eat. He had scored no gold but got his share of crap as well. I showed him the three little bits I had got. I had brought along the NF sadie coil, 12 x7 & the 14 x 9 & said to him to change coils if he wanted to, but no he was happy with the 11" Elite. I dont think he had ever been able to detect in sensitive extra & the hot settings that I could get away with here & he was quite chuffed to be able to do so. After he had watered the horse he was off again, out of site way down the workings. So I carried on & got another nice faint little signal. This one was a bit deeper & into the shatted schist gravels. 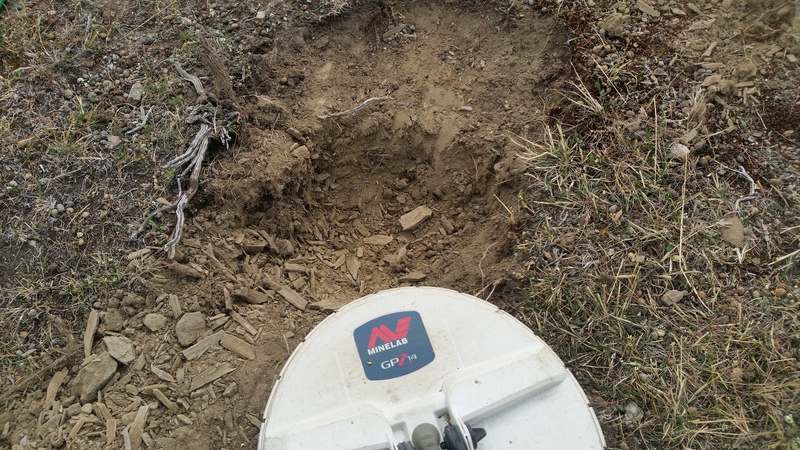 Another sassy bit of the good stuff.....but still small. 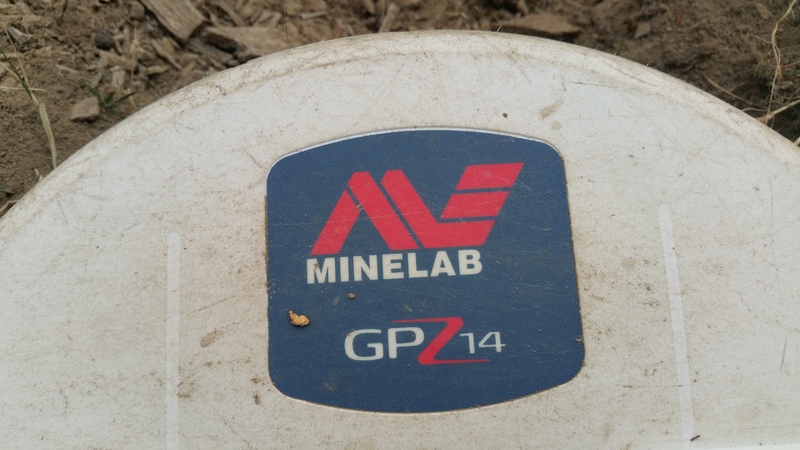 Then another shallow surface scrape signal 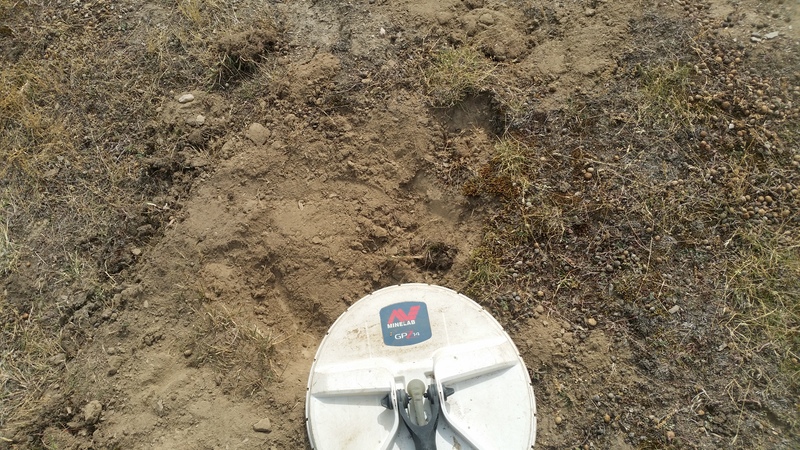 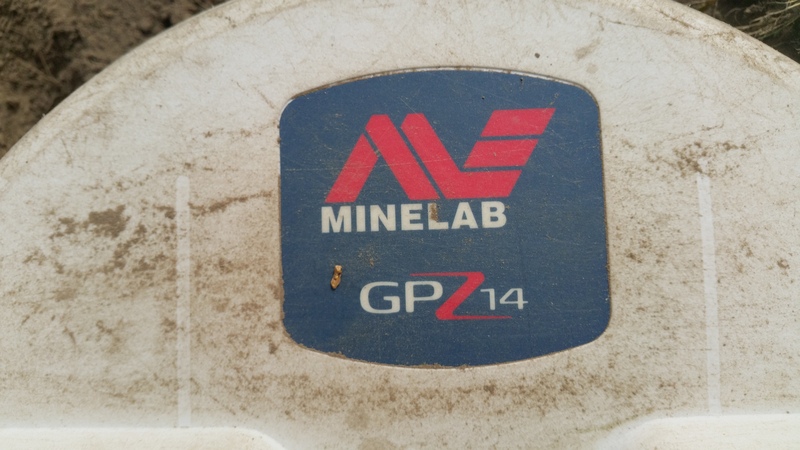 Glenn came wondering back again with his tail between his legs , still goldless. I said for him to try the Gold bug 2 on some exposed schist gravels that the old timers left behind. Straight away the bug was screaming on a target. Flick in to discriminate I told him. He did so & the signal was unchanged. Under my breath I said to myself....shot gun pellet but I said to Glenn, At least it isnt iron. I threw him my green scoop to make it a lot easier for him to locate the target & not to be getting false signals off his hand. Well bugger me....he scored a bit of kiwi gold. In his own words, That is the smallest gold I have ever detected.

Glenns bit of the good stuff 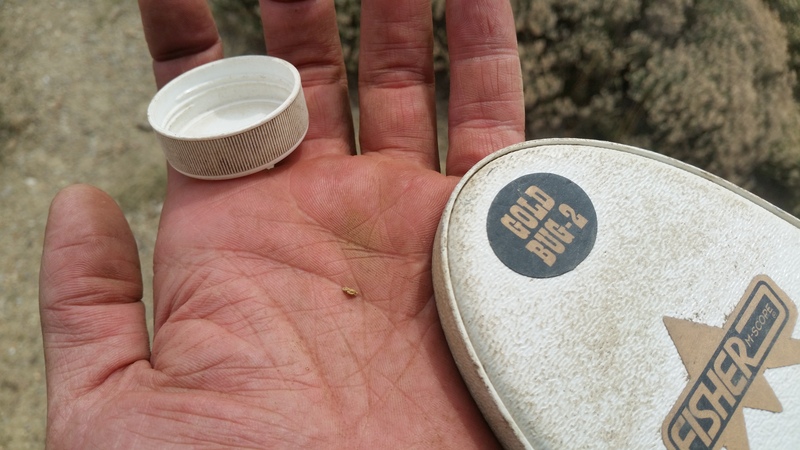 Sadly it was going to be his one & only bit. I couldnt get the bug 2 out of his hands. He loved it. He was getting signal after signal....all be it from then on ....shot gun pellets.

But he was blown away by the sensitivity of the bug 2. My luck dried up too so I suggested me move on. This we did & he went back to the 4500 & 11" Elite. We were both getting our share of crap targets but I eventually snagged a small specimen bit 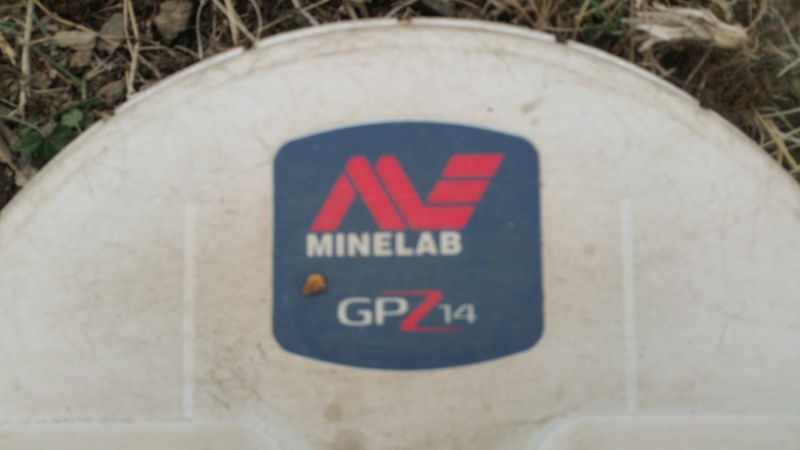 And then another tiny bit 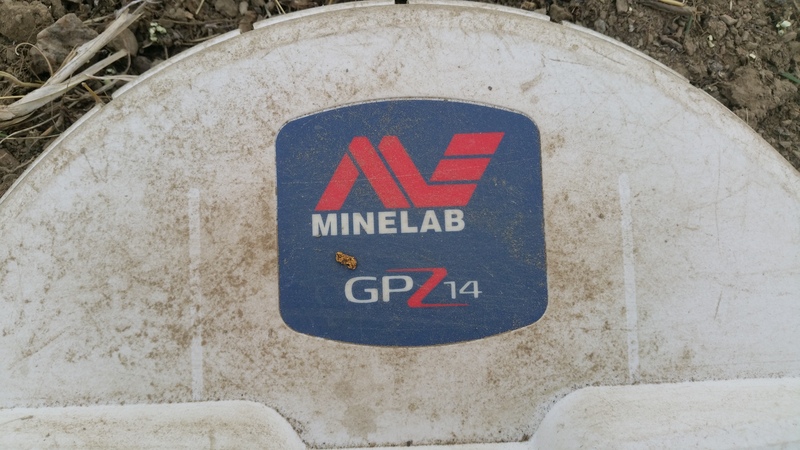 Glenn unfortunately got skunked with the 4500....which suprised me. I thought he would have got a few bits at least, but it wasnt to be. He was rapped with the day & really enjoyed himself & the country side blew him away. He loved the smell of walking through the thyme bushes. Just on dark we called it quits, despite a full moon. BUGGER....but he had to get back to Wanaka.

So for me it was just the 7 small bits for the grand total of 1.1 grams

So after a mint summers day on the Saturday. Sunday dawned a bit windy & cool. Mrs JW was keen to go for a walk up to a look out up on the tops of the Remarkables mountain range. Well not quite the top but not far off it. We drove up to the ski field base building car park & walked it from there. Was a bit of a mission & threatened to rain/snow at any time. When we got to the top her phone battery died & so she couldnt get a photo & I handnt taken mine. So that was a bugger. Not that it was a very nice day for a photo. But this is what it could have been like. This was from last year when two of my boys & me did the same walk. Look at those glacially scoured hills. 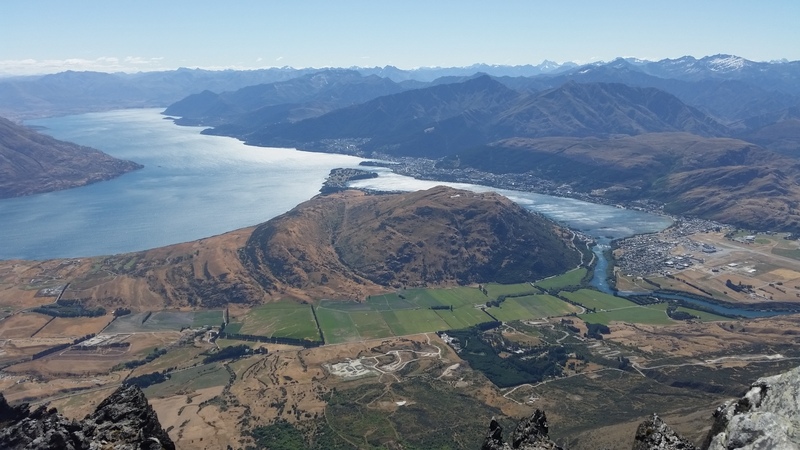 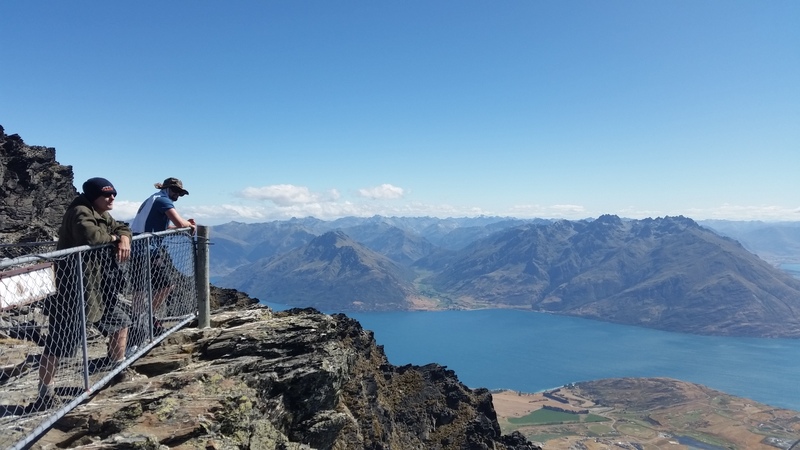 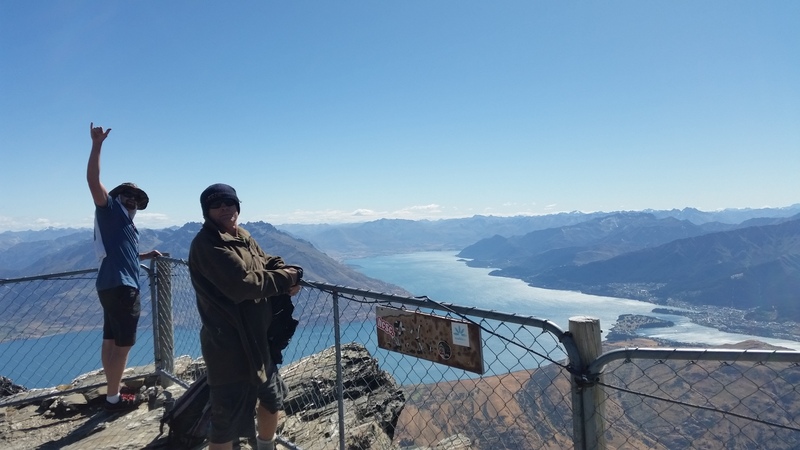 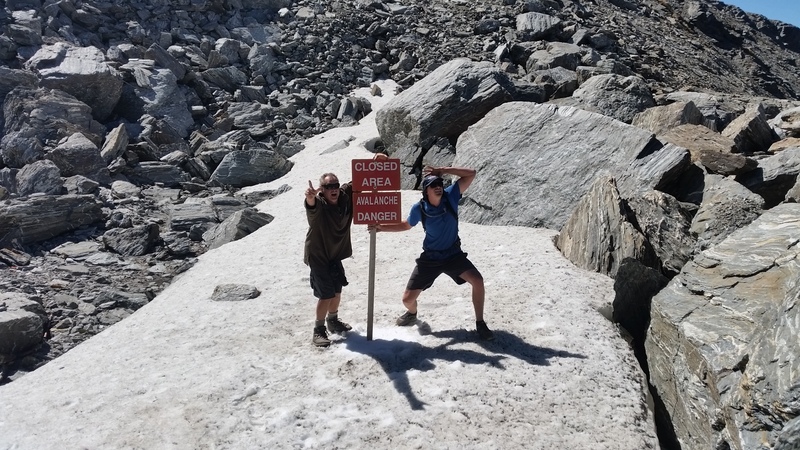 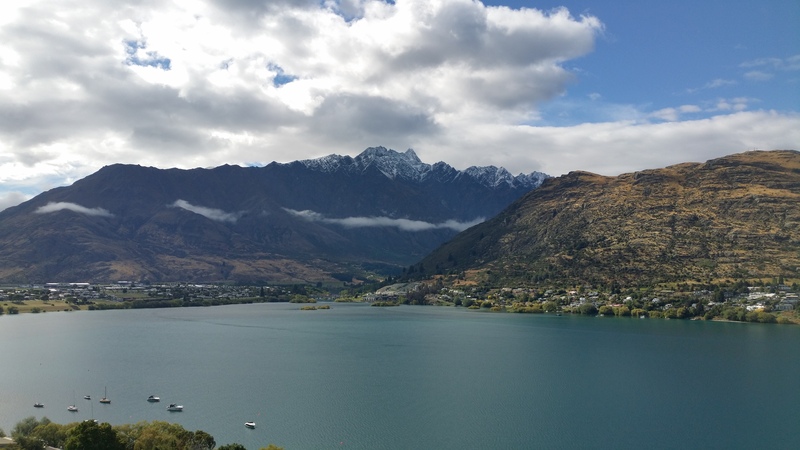 Snow on the Remarkables, when there was none yesterday when Mrs JW & I were up there. So much for summer.

Nice bits of gold there JW and I love the scenery.

Another successful outing and no doubt the Saturday would have made your guests trip. To get out of NZ with a bit of kiwi gold (regardless of size), will be a talking point for him for some time I would imagine especially when you have prospected yourself.

Congratulations on your finds also. Is that an area you have done before? I am always left wondering whether the 4500 would have heard your finds. Seems like you can run the 4500 flat out as you say but maybe there are still finds (the Z gets), which it simply cannot detect regardless of the coil used.

Some friends were in NZ last week visiting a place called Ross. Sent me a couple of pics and it seems like that is also a place well worth a visit to check out the historical side of gold over that way.

You're an absolute gentleman and a VERY talented prospector JW!!!

One HELL of a backyard you have there, but good luck to anyone who ever attempts to follow you in search of the sassy stuff because that is some seriously deceptive (and somewhat brutal) terrain you're swinging in.

BTW that GB2 is absolutely AWESOME!!!!!! I want one, shotty pellets and all

Hi there Axtyr, Thanks mate for dropping in & for your kind words. The trouble with Queenstown & Central Otago in general is that where ever you turn there is a picture perfect scenic calendar shot & any mug, even me, can get a half decent photo.
Bernie, Thanks too mate. Yes, at the moment I am going back over all my old areas that I have thrashed with the 4500 & all my collection of coils, & there are one ot two of them I must admit. I have even gone over the same grounds with the the same coils & settings on different days & still picked up a few pieces. But I was no longer getting anything with the 4500 & that may be why Glenn had a hard time. He did do a few places where I hadnt gone so he could have got lucky. Just like my step daughters boyfriend did with his little patch of 23 bits for just over 9 grams with the 4500 & 11" Elite coil. The Zed is really cleaning up the crumbs. I have noticed that the 4500 & the GP 3000 too has done a good job of the bigger bits at a bit of depth as there doesnt seem to be any around for the Zed. Just the small gold at better depths that the 4500 wasnt getting down to.
What will be interesting with the Zed is when I venture off into unknown & untouched ground. That may not be far away. Cheers.

avon g, Glenn, nice to see you paying a visit. How long has it been?

Thank you for your kind words

It was a pleasure to have your company & glad you enjoyed your day. You are welcome any time. My inital place that I was going to take you to is a lot more brutal than where I ended up taking you. But I thought I would be kind on you.

Just sorry you didnt manage some bigger sassy bits for your rattle jar. There is still more time.....Regarding the GB2. It is a leathal little weapon on the tiny stuff but just be aware that it may not behave the same in your highly mineralised ground as it does here. Cheers

My wife drools over the scenery as well and we keep talking about visiting New Zealand. Maybe not too far away.