Hi guys, Mrs JW & I had spent most of Thursday doing some landscaping out the front of our place. We went down to the Shotover River & got some big slabs of schist for some path way stepping stones & did some tussock grass plantings. We had finished by about 3pm. Mrs JW said, "Do you want to go to ........ & do some detecting?" I hadnt been there for about 18 months due to not being able to get any more gold out of there so I sort of umed & arred....not sounding too keen on it. I was a bit knacked from wrestling with the slabs of schist & digging them in to place. "You havnt tried the Zed there have you?" No I havnt I said.....still not too keen. "I just want to get out of here & it is a nice place to be." she said. I couldnt argue with that so off we went.
The last time I had been here so had someone else before me & had left big un filled holes. I was really pist off with that & the holes were still there. I pointed them out to Mrs JW. Oh...they are big she said. Not holding my breath I rigged up & got in to it. This area has had all the overburden ground sluiced off from the oldtimers right down to schist bed rock. I had done well here back with the 3000, 4500, GMT & GB2 until I was getting no more. Not 1 minute in to it & I backed up on what I thought was a very very faint signal on top of the schist bed rock. Well I'll be buggered. It was repetitive with each sweep. All be it ever so faint. Probably a lead pellet. Bit of a scrape of the top & it improved but was still in the schist. Down now in to the schist & getting deeper & better. Down in to a small deeper crevice in the schist. 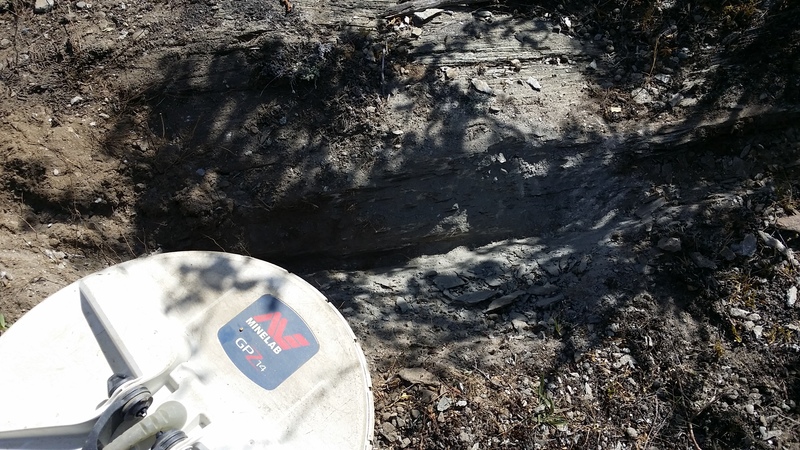 How small is that. You can just see it on the coil in the above pic. 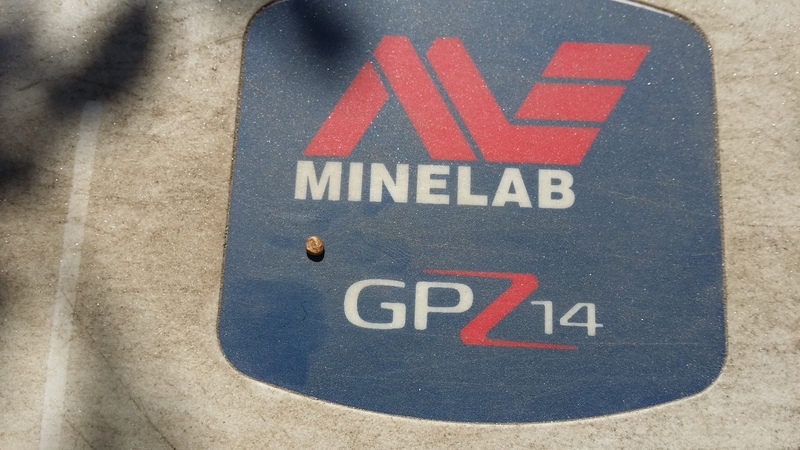 What gobsmacked me was the depth for such a small piece.

Exactly the same scenario. Down in to a deeper schist crevice 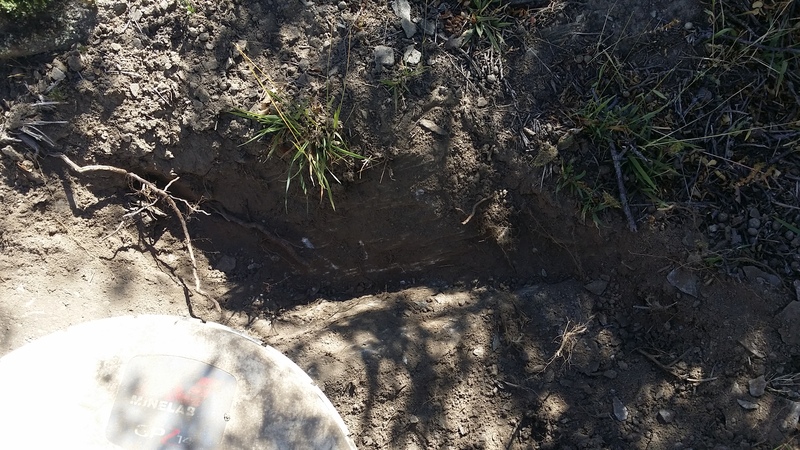 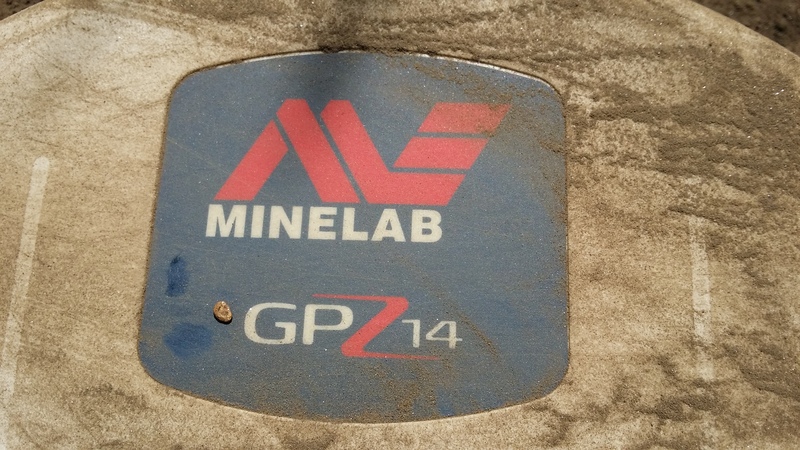 Then another faint signal & down in to the schist wash. Wasnt in a crevice or schist bed rock but down a wee bit. 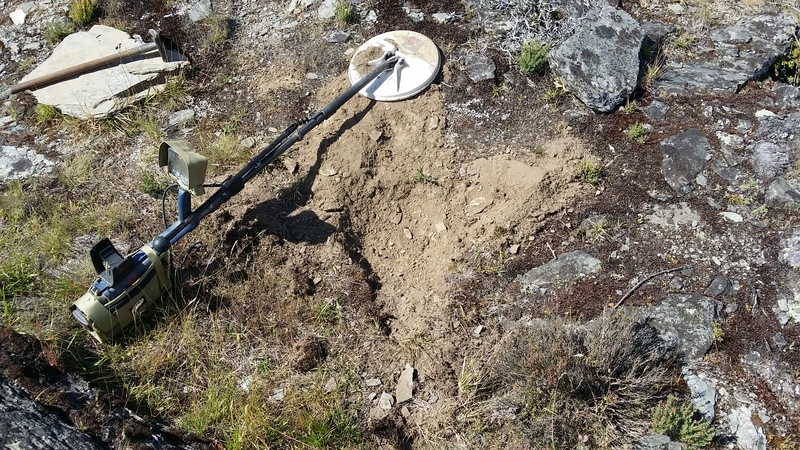 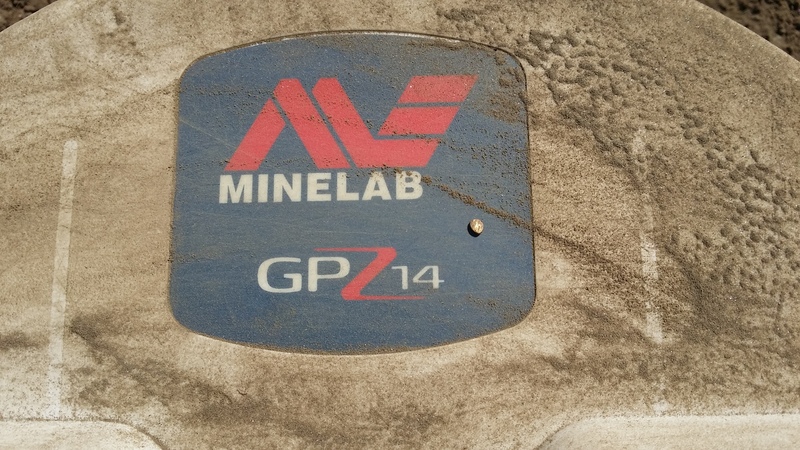 Then it dawned on me that I hadnt got one crap target. Just gold gold gold. One after the other. Shows how heavily this ground has been detected. No crap signals left.

I then wondered over to one of the unfilled dig holes & waved the coil in to it & around the outside. What was that?? A signal. I backed up & on the top outside edge of the hole was a definite signal.
I scraped away at it & it was still there 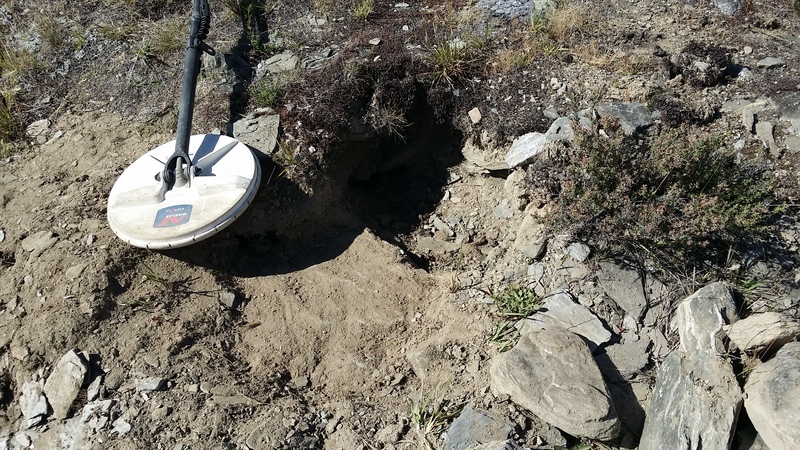 Gold it was. Another very small bit. You may just make it out beside the G on the coil. 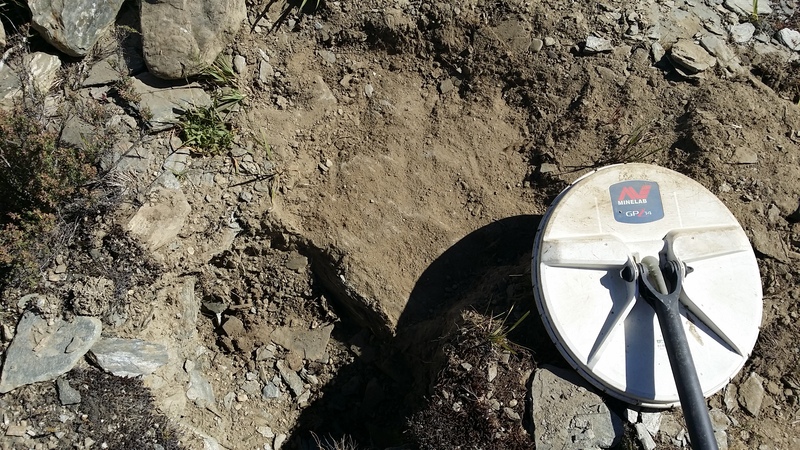 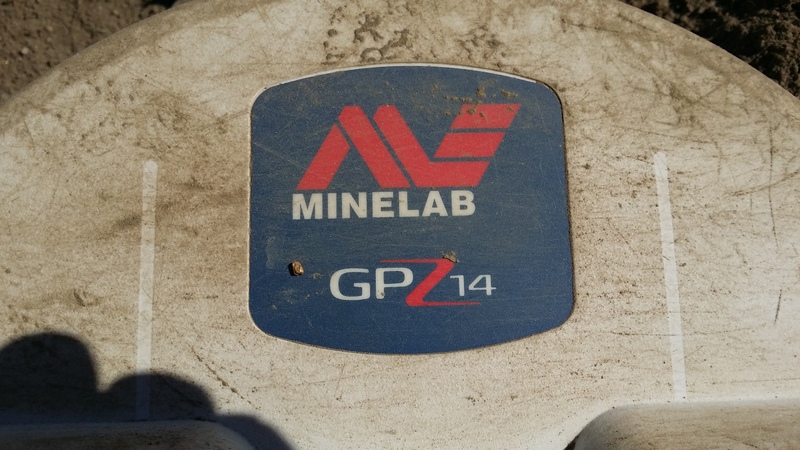 I walked back towards where Mrs JW was sitting waving the coil as I went ready to pack up & head off when I saw another shallow scrape from some one else in to the up on edge schist bed rock. Ha....they must have got a wee thin bit stuck in the on edge folds of schist. And as I do.....

I waved the coil over there scrape. Well I'll be darned....a faint signal. Must me another thin piece jambed in there some where. They cant have re scanned there dig after recovering their target before moving on. BIG mistake. Well to cut a long dig short. It wasnt a shallow bit & I ended up having to smash in to the solid schist rock. No way I thought. Felt the pain for my pick....not to mention me trying to dig the bugger. Mrs JW was pissing herself with all the grunting & groaning coming from me. You may have to come back for it, she said. No way I said. This is going to be gold & I aint leaving it here.

It still wasnt out at this stage. Look at all that smashed out schist. Oh...my poor pick Oh well....back in to it 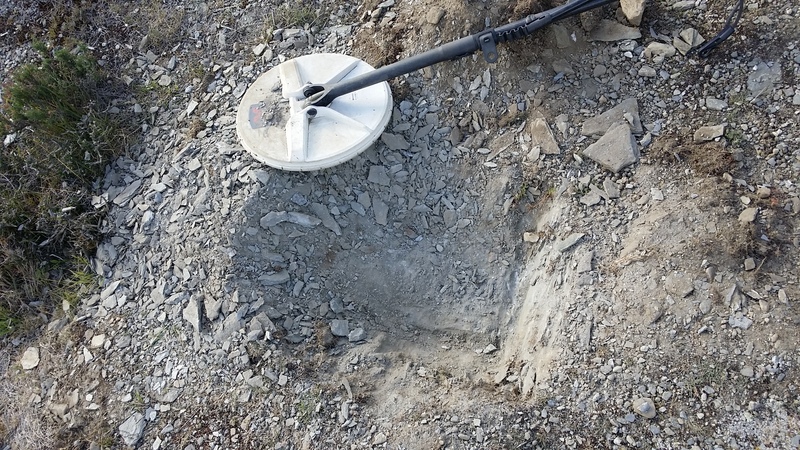 Look at the depth in to that soild schist & Mrs JW having a good laugh....at my exspense 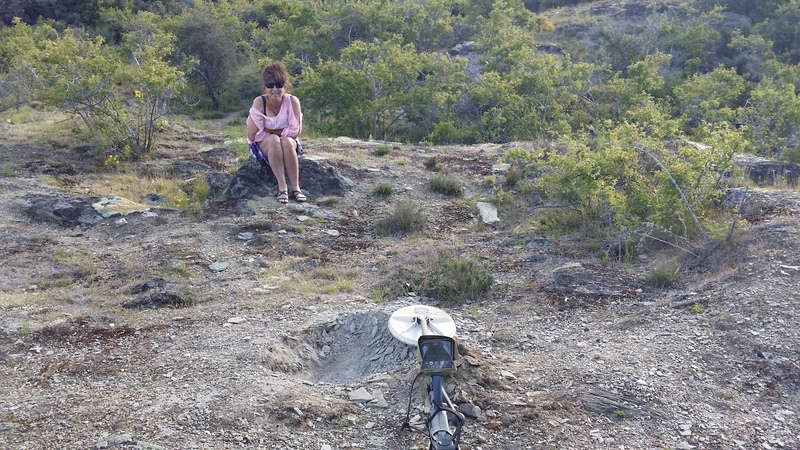 Finally it was out 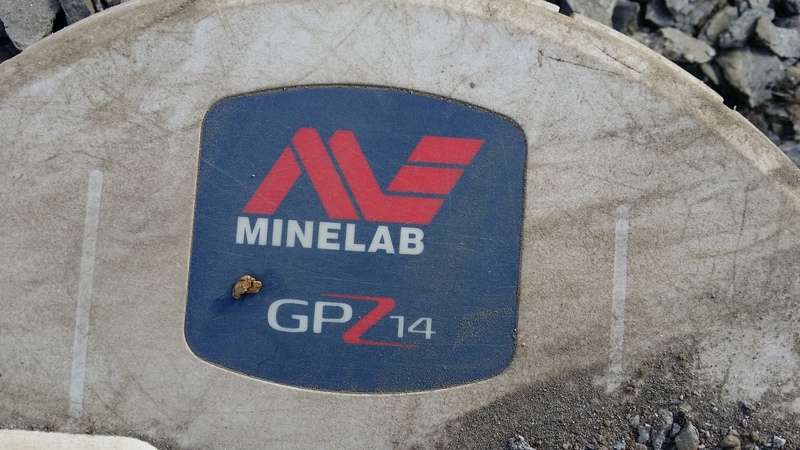 Now I realised that on my very first day with the Zed that there was something very special about this detector. For me it was the depth it was getting small gold at. I realized that any bigger gold would take care of its self. I cant fathom why there was so much bagging of this detector from so many when it first came out. I can only put it down to people being so stuck in their detecting habbit ways with the PI's. The Zed is a different beast & needs to be used as such. I guess I am lucky that & a bit of water has flowed under the bridge since its release & learning curves been learned & I have benefited from that. One thing that really stands out for me is from what JP said. Be conservative with your settings. When I first used it I had the threshold up a bit & the sensitivity to the point where it was running a little bit ratty. Just like I did with the 3000 & 4500. Getting that top end max out of it. The thing with the Zed is the faintest of signals still lift with the thing toned down a bit & so getting rid of that Zed warble, especially with JP's B&Z Booster system. The swing arm helps immensely too. I wouldnt be with out it to get that total coil swing control. Even & parallel to the ground.
Mrs JW & I did go out yesterday for a detect with a bit of success. We are in for a few crap weather days so this will be my last report for 2016. Will do yesterdays outing in the new Year. Cheers guys.

You certainly tell a good story.
Thank you , all the best
madmax800

Good on you JW.

I think it's been a bit too hot for people to get out after Christmas and there have been no reports. Good to see someone is getting something.

You sure are on fire with that zed

Yes the weather over this side of the ditch is

Happy new year to you and mrs jw

Nice going Kiwi,
Can you tell me if the b&z booster has a cordless set up with the GPZ?
Cheers LG....

The B&Z plugs into the WM12 module so the GPZ7000 remains cordless, I use this B&Z setup also on my 7000 in combo with the dual external speakers.

davsgold wrote:The B&Z plugs into the WM12 module so the GPZ7000 remains cordless, I use this B&Z setup also on my 7000 in combo with the dual external speakers.

Thank you Madmax800. Hope 2017 see's you get your share of the precious yellow. Stay safe out there. Cheers.

Hi there Axtyr, Cheers mate. Yer it has been hot over the ditch here too. Well up in the hills of Central Otago it has been. Went to a jet boat meet yesterday. Was a brilliant day up the Matukituki river which flows in to Lake Wanaka. Little bit of cloud cover every now & then to take the sting out of the sun. Sorry no pics as I forgot my phone

Hi Jen, Thank you & thank you too from Mrs JW.

. Thank you. And thanks Dave for giving that answer. So yes the B&Z booster & twin speakers with the WM 12 just all hangs off my harness so detector is still cordless.Cheers.

Great write up again JW.
I wish my partner was as keen to get me out swinging as yours is for you.
My misso had a 5min swing at Ophir almost 6 years ago with the 5000 and dug a horse shoe at two feet, never again she said.

Hoffs Gold wrote:Great write up again JW.
I wish my partner was as keen to get me out swinging as yours is for you.
My misso had a 5min swing at Ophir almost 6 years ago with the 5000 and dug a horse shoe at two feet, never again she said.

Mrs JW is a lot of talk sometimes. The number of times I have carried in a detector for her & she ends up not using it.

She dug a gin trap at about two feet a few years back & that took the sting out of her. Correction.....I finished digging it for her after about one foot. She does enjoy tagging along though which is great but if she does detect & hasnt found gold in 5 minutes than she hangs it up.