Hi Guys & Gals, Merry xmas to you all. Mrs JW's daughter & partner are down for a few days over xmas & we headed out to a secluded river beach for a xmas picnic lunch today. It was a stunning day. This view from our drive out to our spot. 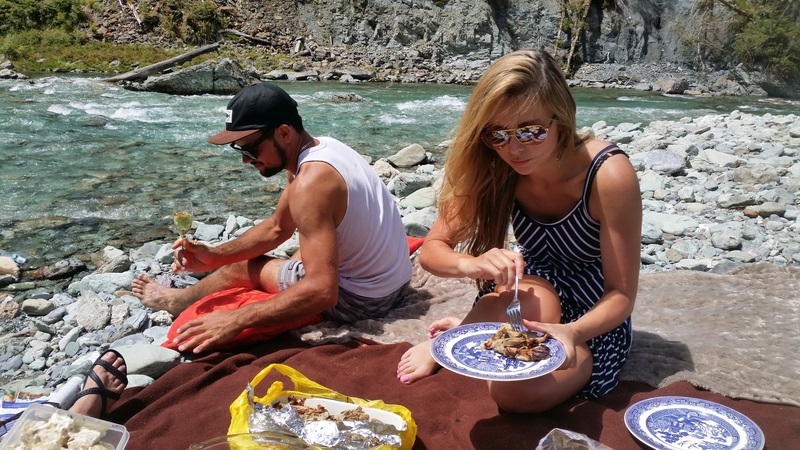 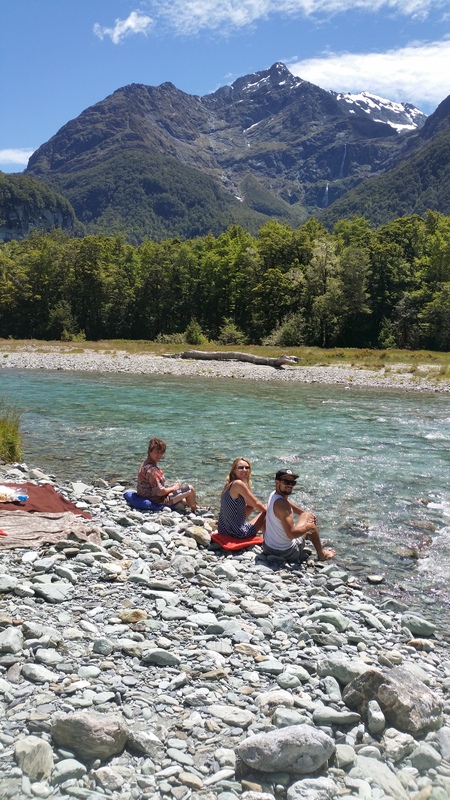 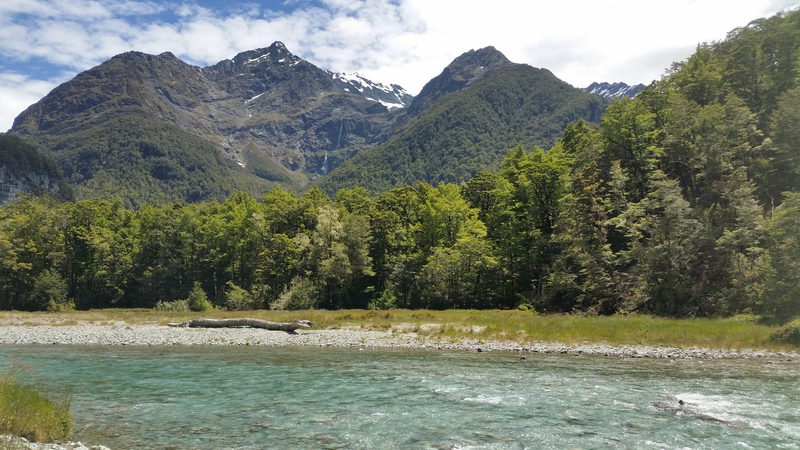 A few days earlier our plan was to take the "kids" on a bit of a ticky tour of the sites around Central Otago & then do a bit of detecting. More to the point MR's JW was going to take them on a ticky tour while I detected & they were going to call in later & do a bit of detecting after seeing the sites. We ended up doing quite a bit of driving off the beaten track before they dropped me off to detect. We came across these display pieces on our travels. Old dredge buckets & an old sluicing monitor. 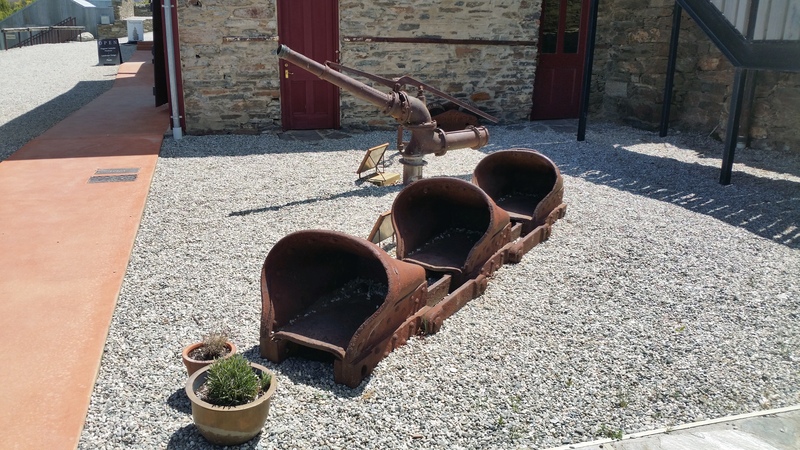 By then Mr's JW said to her daughters partner, Would you like to stretch your legs for a bit, maybe do an hours detecting then I will show you around. Yep he was keen for that. So I had taken the 4500 for him to use & I was going to do a few tests with that & a few other coils I had brought along to do try on those two bigger bits of gold I had got last weekend at this spot with the zed. As I was sure the 4500 should have pinged those two. My plan was to do that with the 4500 while they were away & when they came back I would use the zed & he the 4500. Anyway, I got him rigged up with the 4500 & the 11" Elite coil. The question he asked me was , Where havent you been......Over that side of the gully & around there. I said. OK....so he was off. I went back over the same ground & a bit further from where I got my finds last weekend. I snagged 3 more little bits. I then heard him call out & saw him waving his hand with fingers pointing up, signaling he had found a bit. Sweet as, I called out & gave him the thumbs up & then carried on with what I was doing. After a while I looked over to where he was & saw he hadnt moved very far but was doing a lot of digging & the detector nutting off. MMMmmm....has the bugger found a wee patch. Mr's JW came over to me to confirm that he had & that he was now going no where. So there went my plans to do the tests with the 4500. To cut a long story short he found 23 pieces for just over 9 grams. 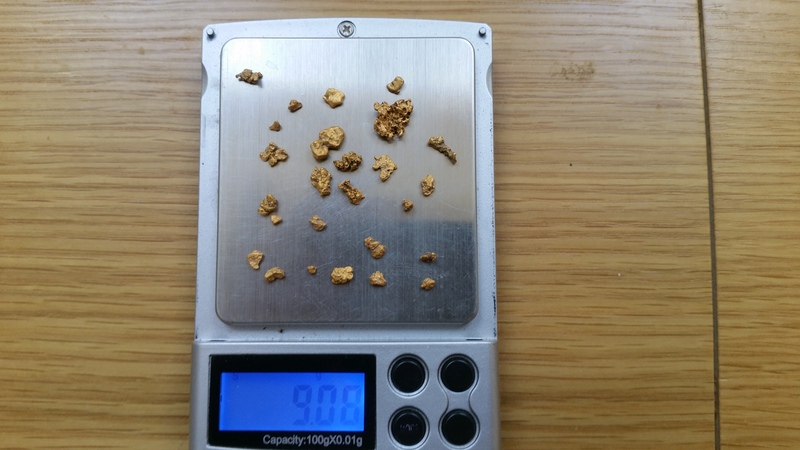 So that was the day. The next day they had the day planned doing other stuff so I headed in to the hills on my own for the day detecting. This was xmas eve day. Well damned if I didnt stumble on to a little patch of my own. After a couple of hours I had this. Before I stopped for a coffee break. 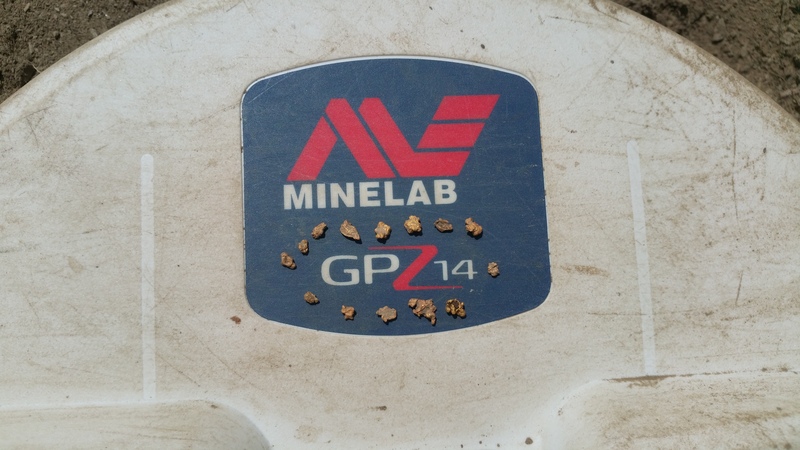 To cut a long story short & save heaps of pics I came across a couple of little glory holes. The last one coughed up about 20 pieces & is still giving signals. I am going to have to go back & widen the hole.
Down about two feet & in to that schist basement rock 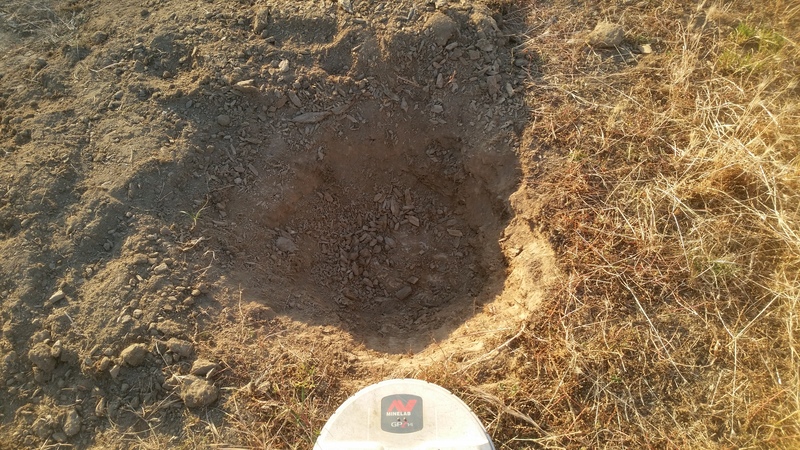 A few pics of the gold coming out of it. Just small. Smallest was .04 of a gram 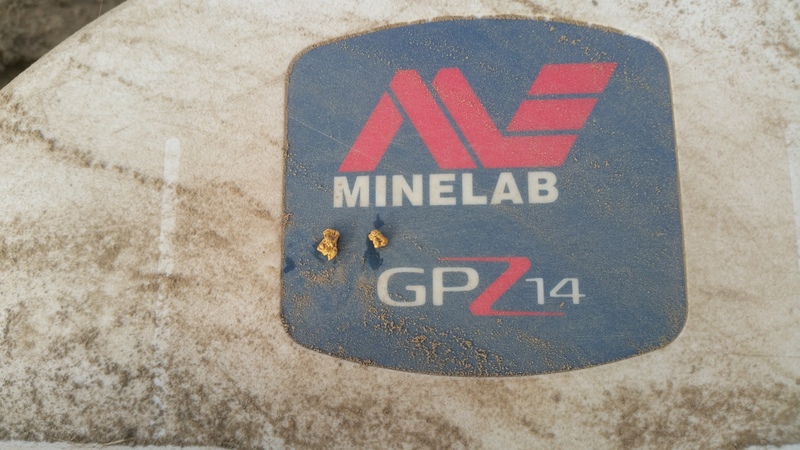 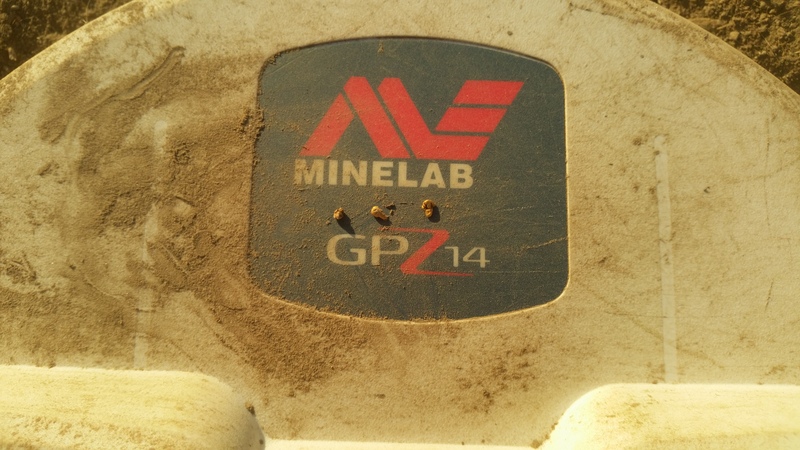 I did get a bigger bit on the opposite side of the gully. 1.7 grams 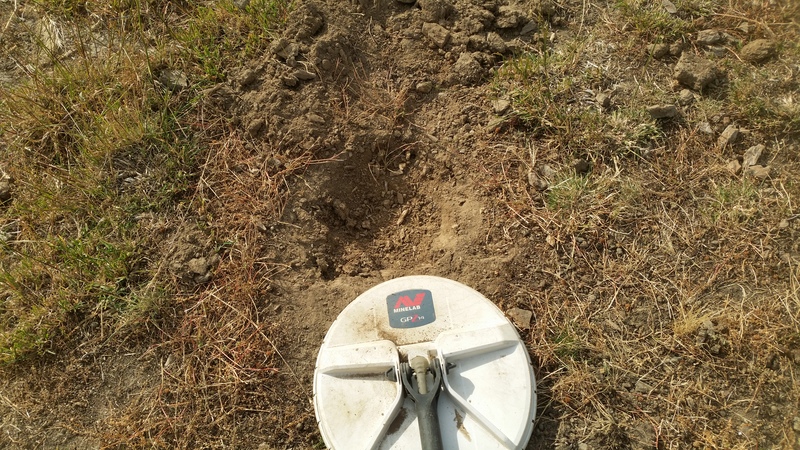 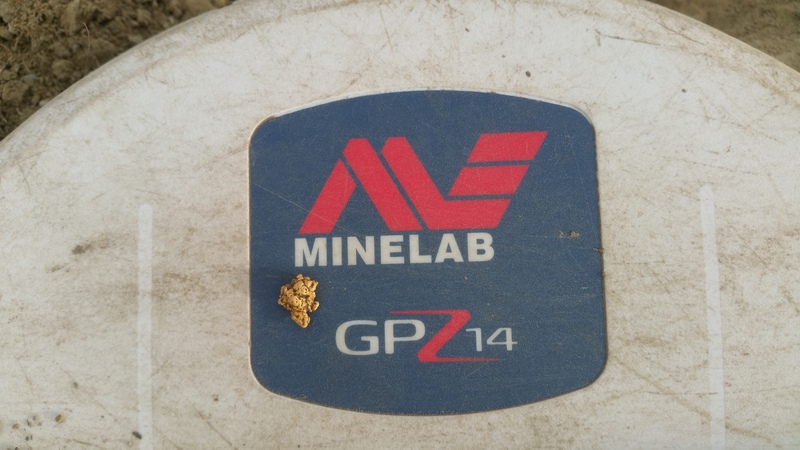 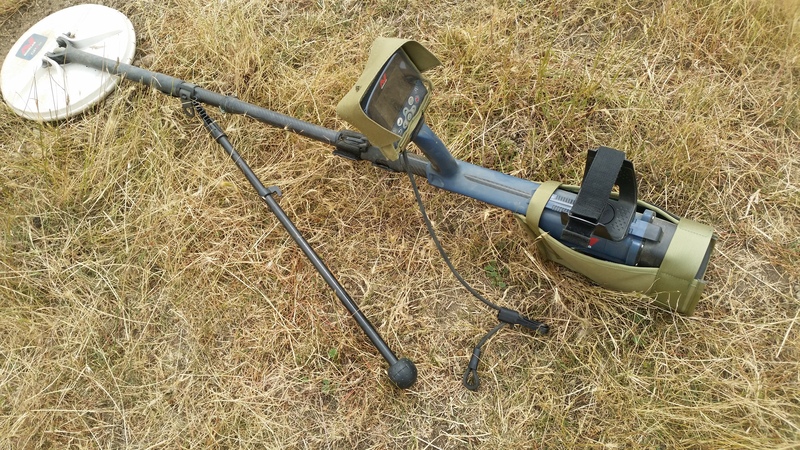 I then had a light bulb moment. What I did was to quickly wrap the bungy cord one lap around the swing arm & detector shaft & hook the bungy back on to itself to hold the swing arm at bay. Worked a treat. 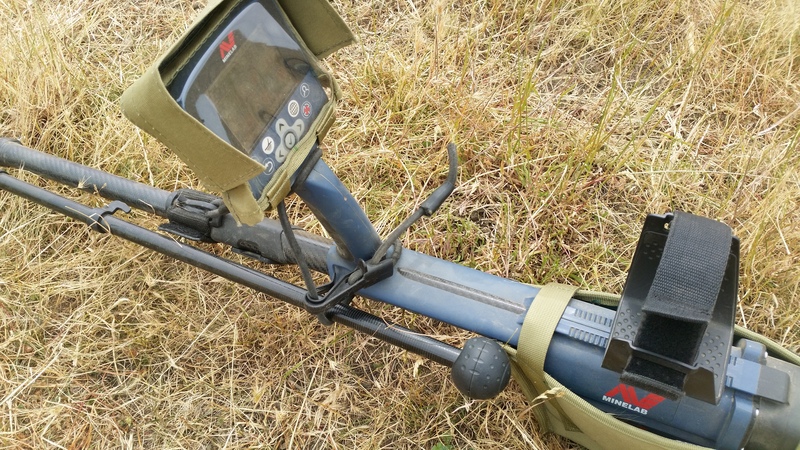 Simple to just unclip it & hook the bungy back on to the harness when carrying on detecting with the swing arm. 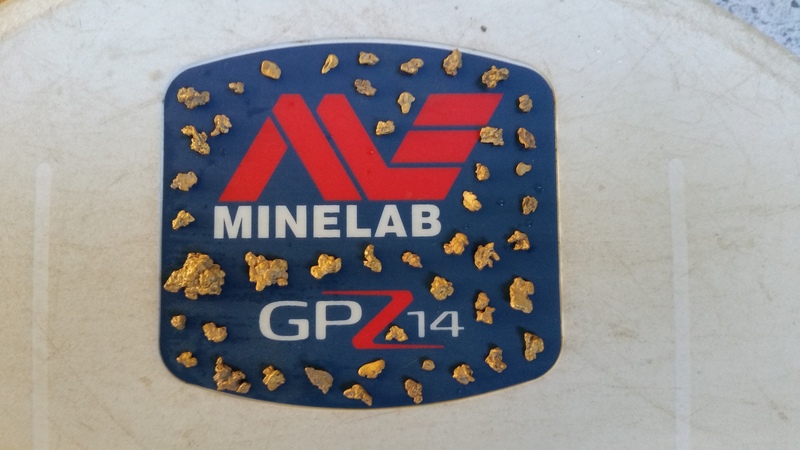 Nice going on the gold again JW, and what I do with the swing arm is just lift it over the screen to the opposite side, that way it just sits there out of the way while you dig or pinpoint etc and just a simple matter of lifting it back over the screen when your on your way again. The little clip to hook it is still in the box the detector came in.

The weather over your way looks so cool.. we had a bit of a heat wave
So Christmas day was

Love the country side..
nice relaxing family picnic
congratulate the young fella.. he did very well..


Oh and I love all that SASSY gold

Keep up the great work!

Another great family trip to the goldfields JW.

Thanks again for sharing your pics, story and finds and a big congrats to you and the young fella.

, no doubt about you kiwi your a one man vacuum cleaner hell bent on ridding the countryside of those nasty little nuggets, tis gods work you do son

and surely as night follows day you will strike a big b**tard ....and soon I feel

Heaps of pieces for both of you and more to come. Well done.