Hi guys & Gals, Mrs JW had a wedding to video so I made the call to hit the hills for the day. The weather wasnt too crash hot so I held off for a bit, but the sun popped out so off I went. Got up in the hills & it clouded in & was looking pretty suss. I had a plan to clear an old timers throw out heap of wild thyme bushes & some large briar rose bushes as I had detected a 5 gram slug on it in the past. Due to the thyme & briar I was unable to get my coil in to a lot of throw out pile. I spent an hour & a half pulling, chopping & sawing to clear a large area. I still had the little sadie coil on the 4500 from last sundays effort at getting skunked. So after a coffee & getting my breath back I hit the old heap. Bloody nothing......

Oh well....I still had the 11" Elite up my sleeve but I continued on down this turned over little gully from the old timers with the sadie.
The land was the greenest I have ever seen it. 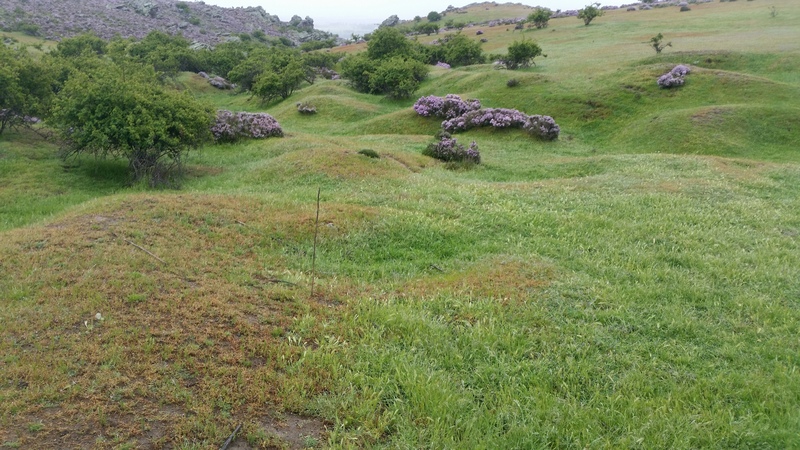 with the rain & spring conditions it was lush with grass & mushrooms. 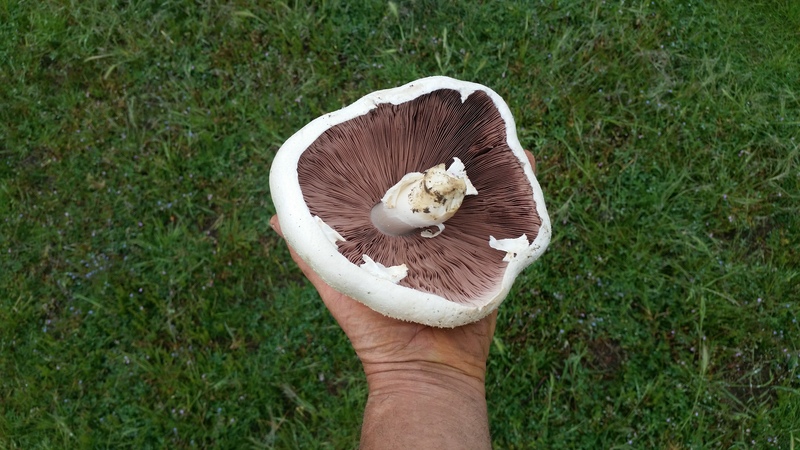 The grass was wet with the rain & I was hoping for more depth due to the moist ground. Now I have been down this gully so many times with so many different coils & detectors that I wasnt too confident at getting anything. Hence my plan to clear that old throw out pile. My last time down here was with the 4500 & the 11" Elite when I got these 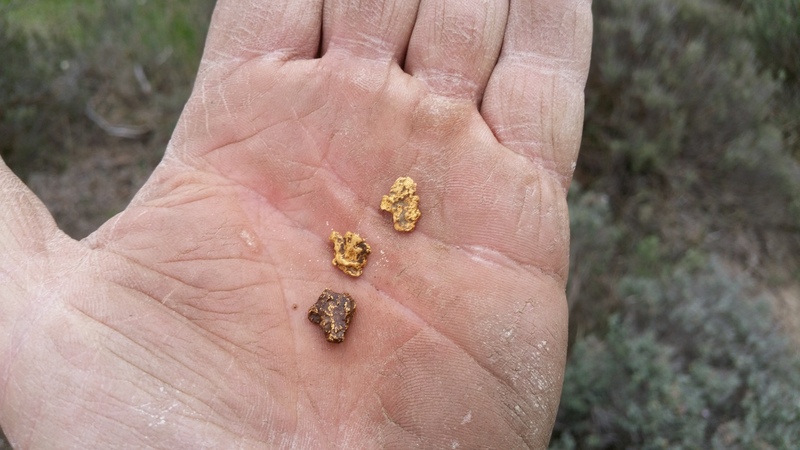 The trend continues....with the mushies any way.

After about an hour I got a very positive signal & thought it was just going to be rubbish. Probably a .22 bullet head from a rabbit shooter. I dig all signals & the beauty of having been down this gully so many times is that there isnt much if any rubbish left that I havnt dug up & removed. Unless it is fairly recent. I dug down on it. 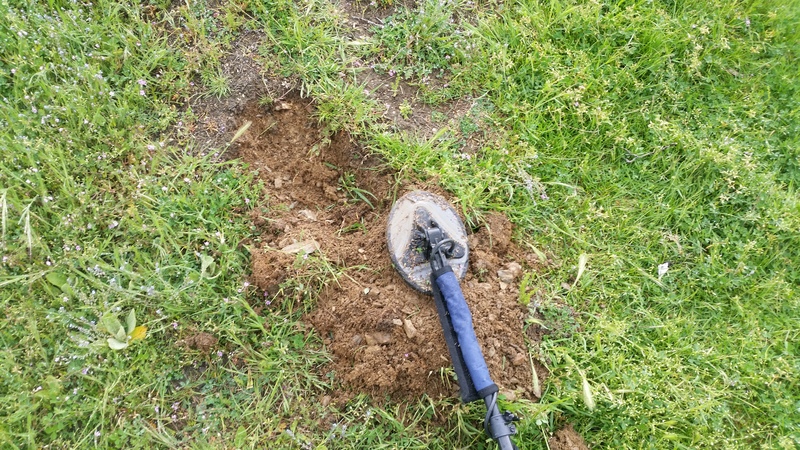 Well stone the crows.... A sassy bit of gold 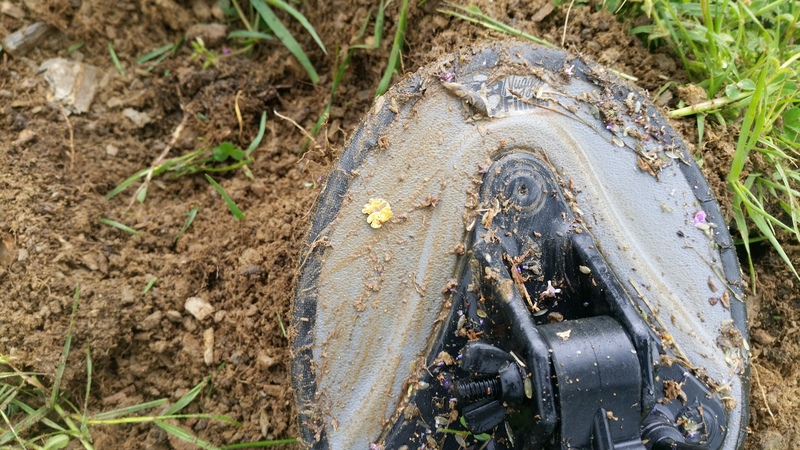 Two sweeps later another loud signal. Got to be crap. Surely.

First dig up on the left 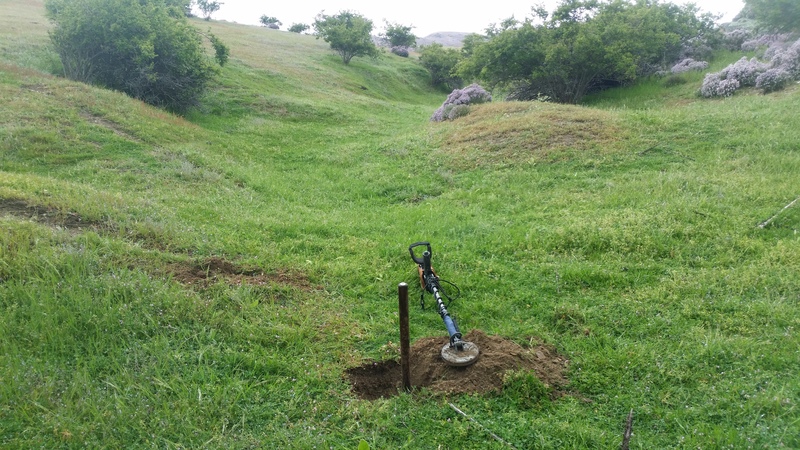 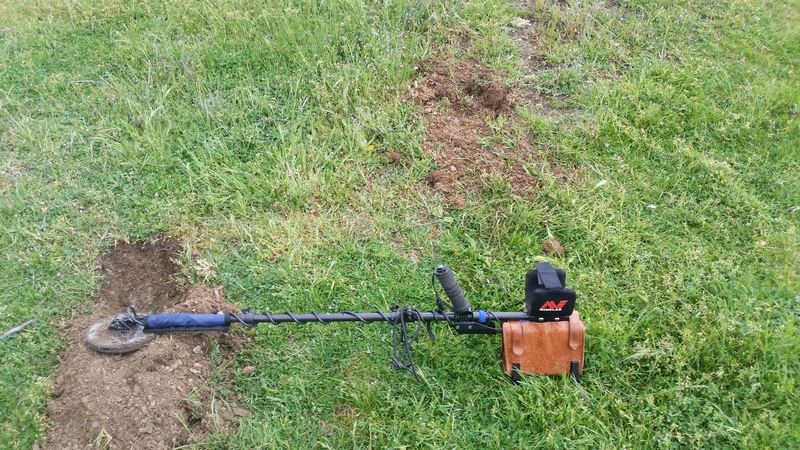 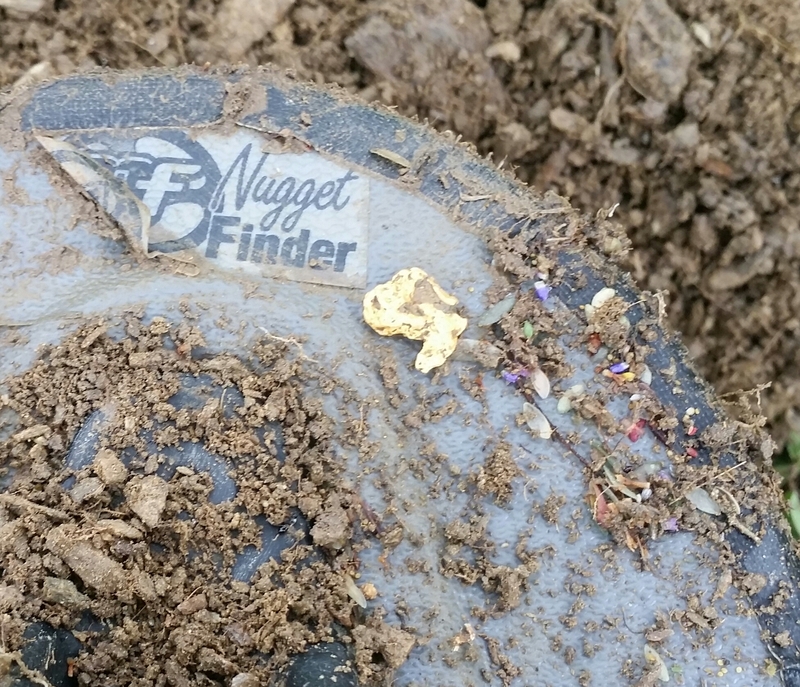 In less than a minute 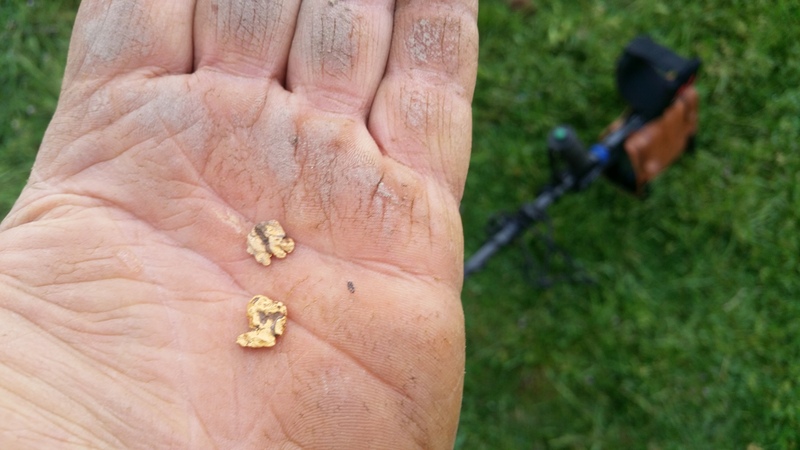 That was it for the sadie as the coil had got pretty wet & was starting to false badly. Later inspection showed that the skid plate had worn through in a few places & water & muck had got in between the skid plate & the coil. The rain came in so I bailed back to the wagon for a coffee & to change to the 11" Elite. It took an hour for the rain to button off & I went back to my cleared pile with the 11" Elite. Still nothing. Damn. I got many signal that all turned out to be quite deep .22 lead bullet heads & a few shot gun pellets. Not one .22 shell casings as I would have got those earlier. 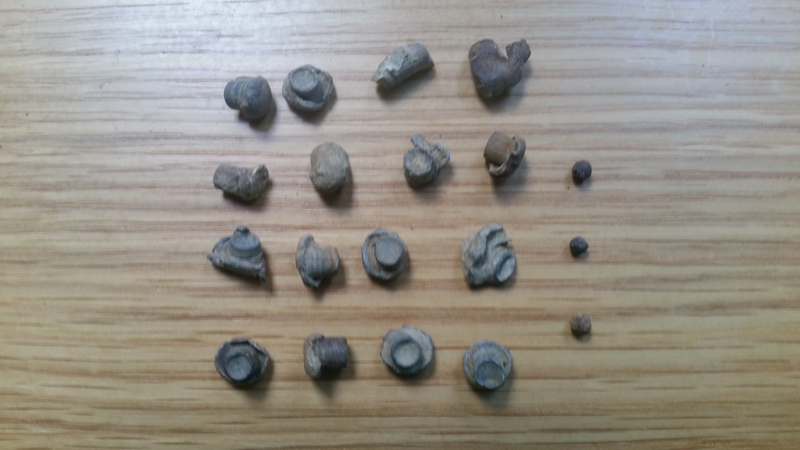 These would have been there for quite a while & as I dig all signals & have been down this gully many times I can only come to the conclusion that (A) it is the 11" Elite coil doing very well or (B) the modded 4500 or (C) both A & B. I did get a faint dodgy signal that sounded like a nail or bit of wire. 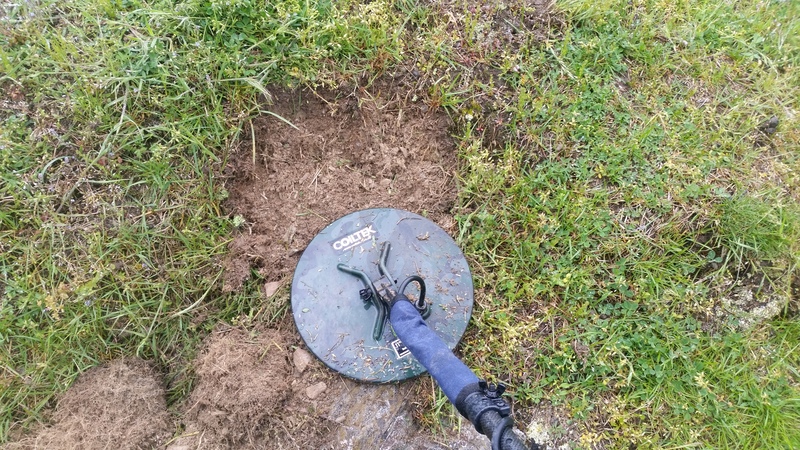 It wasnt deep at all. In fact it was in the grass roots. No wonder why it sounded like a bit of wire or a nail. 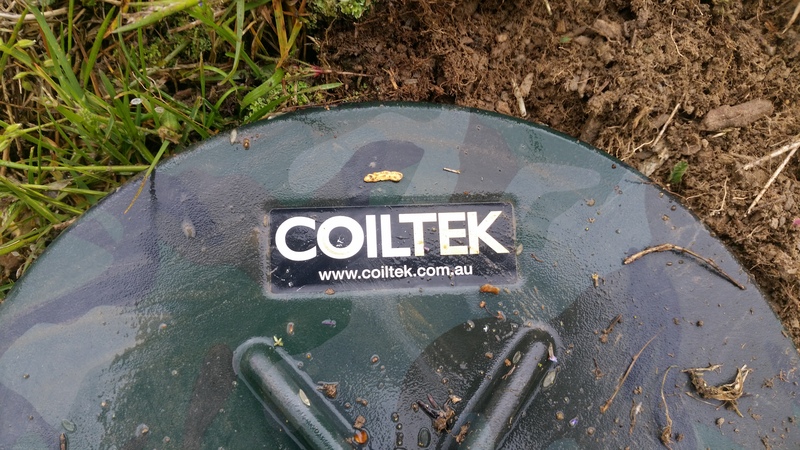 That was it for this gully as the rain came back. So I headed off. On my way out & the rain eased off so I thought I would try some where else just before dark & heading home.

First signal was very faint. I dug down on it & it got louder & better. Too loud & too better for my liking as I got further down. Down 18 inches & I was having trouble pin pointing it exactly. The Elite coils are a curse for pin pointing in tight deep holes. Back to the wagon & I grabbed the GB2, my pin pointer & discriminator. Bugger...iron. Oh well I may as well haul it out as you never know....it could be masking a gold target. Has happened many times before. Down the depth of my pick handle which is 24 inches &..... 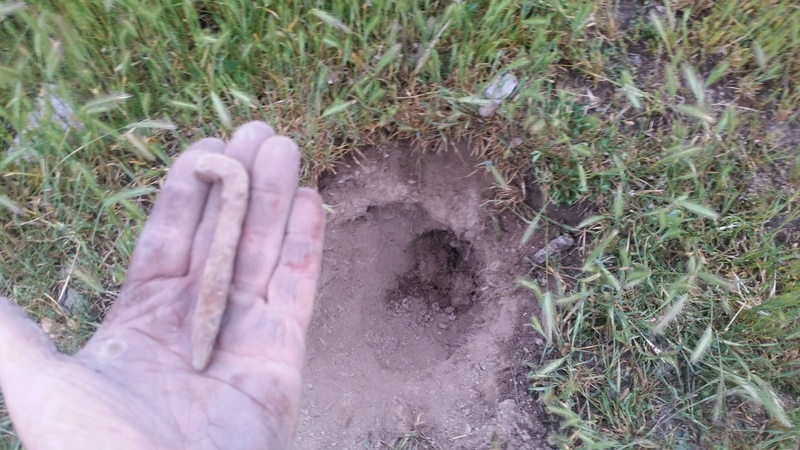 And that was it. No good target either. Well that was a good work out....

Then a very very faint soft signal. A few scrapes & it had moved. Ah....probable a shot gun pellet 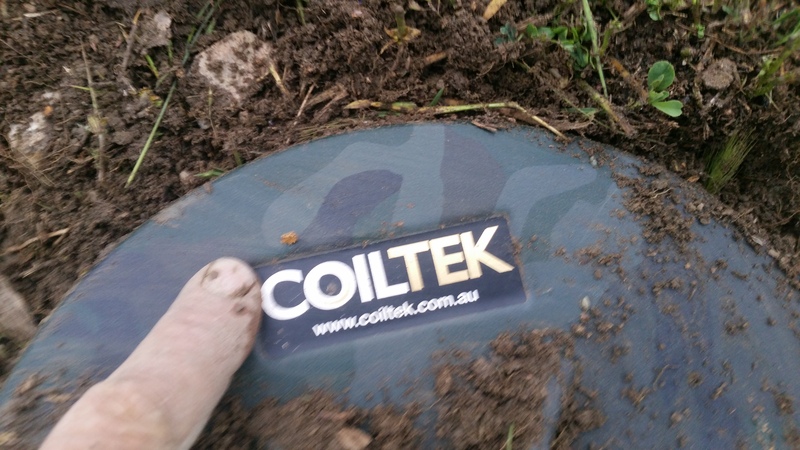 About the size of a pellet...but the right colour. 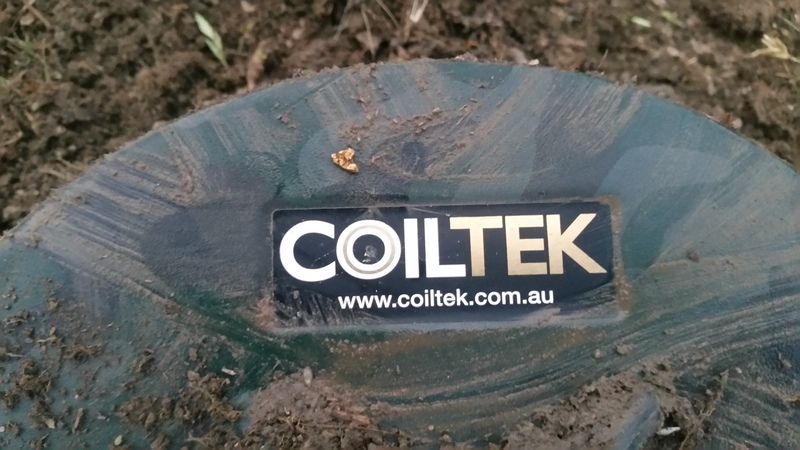 Well that was it as darkness forced me out & home 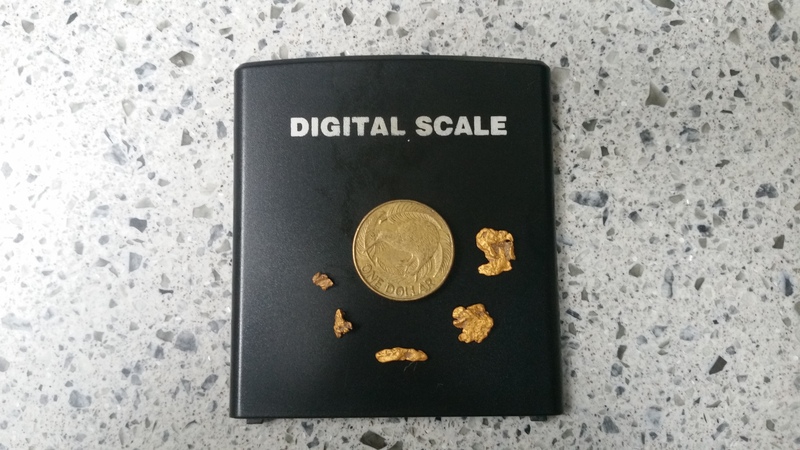 Cheers & Good luck out there

Well done JW. Some more nice gold and some great mushrooms there. Stuck at home at the moment, I can't stand the mosquitoes and my car brakes need repairing.

Hmm,hmm. JW,I think the mushrooms are the gold and the gold is a bonus. The best of both worlds,you cant ask for better than that. Well done

Lovely green paddocks..
Some gold
Some mushrooms
Plenty of fresh air and exercise..
What more could you want?

Gee John.. i hope you are keeping a diary of all your posts and pictures..
make a damn good book, you tell it so well.

Thanks again for sharing with us all..

Yep Kon61 i agree with you.. gold is the bonus

Never mind the bloody mushrooms (although a porterhouse covered over with them is to die for hmmm...) Now where was I? Oh yeah, did any one else see the 14 kilo gold nugget next to the mushrooms, which JW failed to mention!

Needless to say...I agree with everything Slim has said

JW some very nice finds there.

Congrats to you and thanks for the great story, oh in case I forgot I hope you had a great birthday.

and Mrs JW spoiled you rotten.

Thanks again guys for the comments & kind words. Slim....I was trying to keep that 14 kilo slug under wraps. You have now let the cat out of the bag.

Not quite mushrooms on steak but...

Cheers Sharkbait & Mike for the birthday wishes.
Kon....yer the mushies are the gold....but not the gold top variety

If you know what I mean

But they are going down a treat. I am almost mushied out. Mrs JW cant stand them.

Jen....I had thought of keeping a copy of posts a few years back but when I went back over a few sites that I had posted on to save them they had mostly dropped off & gone in to cyber space so lost for ever. So I was a bit peeved with that. I have to admit that the paddocks are the greenest I have ever seen them. Give it a month or two & I am sure I can show you pictures of a dust bowl.
Thanks axtyr for dropping in. Hope you get out there soon.
Piston Broke.....I enjoy sharing my adventures, pics & finds as much as you enjoy seeing them. So thanks for that. It is always great to get out there, see the sights & I enjoy the days out there gold or no gold & I have had a few skunked days lately. Sunday was no different & I got skunked then to but took a few pics. 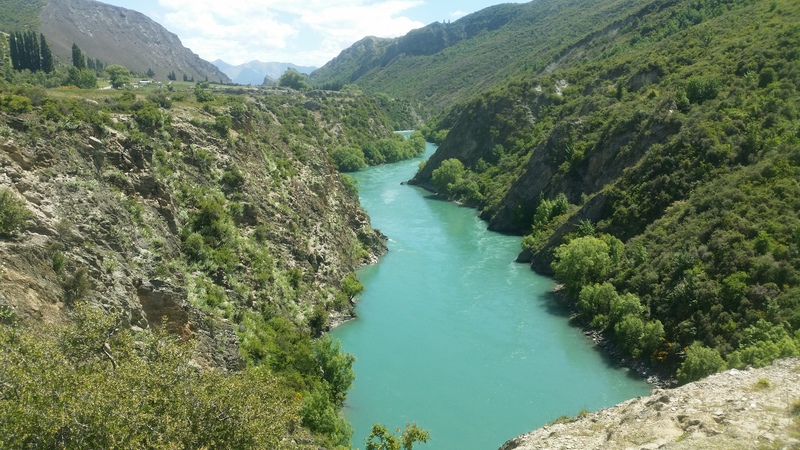 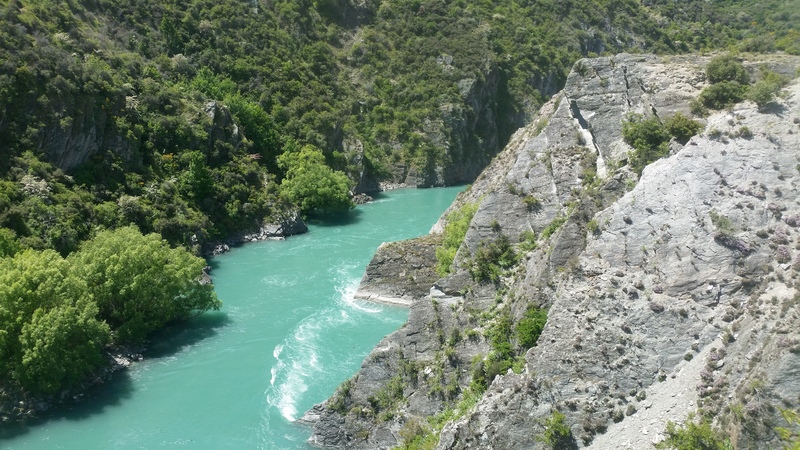 Far out this post ha everything, great scenery, great food, great shots and to cap it all off great gold! Thanks for posting and hope you and your family are safe.

Thank you Ian. Yes me, MRs JW & families are all ok. None of us were in any of the Quake zones. Although MRs JWs daughter & partner who are in Napier were woken up & they both ran outside.
Nice to see you got away for a swing & got yourself a bit of Victorian gold.

Congratulations KiwiJW. You have done it again.

Great day all round by the looks of it to me. Not a mozzie or an angry snake

Dinner looks good and great to hear you were not directly affected by the quakes.

On the lighter side, does the rise in the coastline mean that we will need to redraw the map?

Thanks Bernie, The rise in the coastline may create more real estate.

NZ is getting bigger. No gold there though. Cheers