Would This Happen To You.

Would This Happen To You. 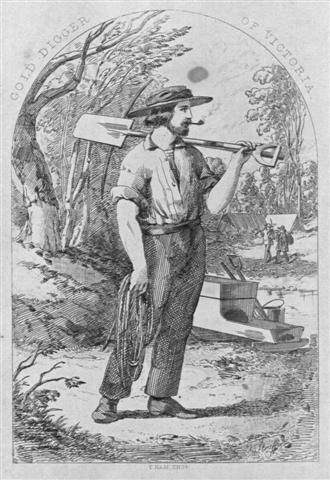 A solitary traveller was slowly wending his way
through the depth of the lonely bush in the early fifties,
when a loud and piercing shout, or rather shriek, caused
him to suddenly stop and listen intently . Thinking that
a fellow being had met with some mishap and was in
want of assistance our traveller answered the wail with
a loud Goo-ee, hurrying forward at the same time in the
direction from whence proceeded the alarming sounds.
A few minutes brought him to th e object of his search
whom he found to be a digger bound securely to the
trunk of a large stringy bark tree. The poor fellow presented
a sorry spectacle indeed, for he was tied in such
a position that he could see neither to the right nor to
the left, being with his face to the tree, and, in addition,
his billycock hat had been pressed over his eyes, or had
worked there in his struggles to free himself. His captors
had certainly not studied his comfort.
" Hallo mate !" said the new comer on nearing him;
" how did you get in this fix ? These are rather hard
lines."
The captive, who till then, did not seem to know of
t h e approach of his possible rescuer, on hearing his voice,
called loudly to him to undo the binding ropes. The
other drew near him and raising the billycock from the
captive's eyes repeated his question.
With many imprecations the story was soon told.
How that he had started from the diggings by himself
and leaving the usual track he had travelled slowly on
until about two hours before, while boiling his billy
for dinner, he was surprised by three men, who commanded
him to stand and deliver. Of course, he was
obliged to obey under the circumstances. They searched
his swag, took all they could find and were about to leave
him, when a passionate word he uttered caused them to
tie him to t h e tree out of revenge and leave him as food
for the dingoes.
The stranger listened to the story with great interest;
and after a pause, at the same time regarding him
curiously, he asked : " Did they take all you had ; surely
you had a good sum concealed somewhere about you ?
You look too old a bird to be completely done."
" The villains didn't take all I had, thank goodness,"
was the reply. I have a good round sum planted in my
boots, which they didn't spring. If you loosen these confounded
cords I don't mind giving you a tenner and
drinking your health in a bottle of grog at the nearest
shanty ."
" Are you so firmly strung up that you cannot free
yourself ? " said his seeming friend. " I wonder you did
not free yourself sooner ?"
" I've tried and tried and the more I struggle the
tighter I am fixed," replied the prisoner angrily.
" How long is it since you were stuck up ? Perhaps
the fellows will return and finding both of us here they
might finish us off with a leaden pill or two."
" There is no fear of that . Such fellows don't let the
grass grow under their feet. Besides it's two hours ago
and they are ten miles away by this time."
The " friend in need " seemingly reassured by
these words drew nearer and taking a clasp knife
out of his pocket said : " Well, if that is so, I
don't see why I should not finish the job so well
begun. It would be flying in the face of Providence if
I did not avail myself of this golden opportunity . So
here goes. Just lift up your leg old man while I slip
your boots off. Such a lining as you have must hurt
your corns."
Guessing the other's intentions the captive struggled
fiercely to free himself. But his struggles were of no
avail tied as he was, and the boots were quickly off his
feet: To rip open their lining was he work of a minute
and in a n other minute the robber was out of sight and
speeding through the bush with the alacrity of one who
knew the value of both time and distance in such a case.

Taken for the book
BUSH TALES BY OLD TRAVELERS AND PIONEERS 1888.
This Book can be found in our E-Library.
https://golddetecting.forumotion.net/f74-ebooks

Yep I've met a few of them lol!

Thanks Whiskers,That was indeed a sorry tale.
Would it happen today? I dont think so,because we will not go hungry if we dont find gold in them there hills