I'm a frog, living in France and doing gold panning, it's not a joke ! We have a group with friends and we mostly go in the rivers with pan or metal detector... Our biggest nugget 10.2 grams (very big for France !)...

Well well well... I'm here because I'm planning to come during 2014 for gold prospecting in the OZ outback... And I wanna prepare this trip, meet people, planning barbecue in the bush 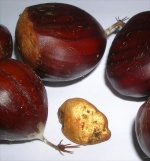 Hi Frognugget,
Welcome to the forum.
Please let us know little bit more about your trip.What are you planing, where are you planing to go and stay.Is this your first trip to Australia?

Might see some forum members around the goldfields.
Looking forward for your plan.
GoldEN

I've already been two times in Australia - 1996 & 2006 I travelled around, but I was not prospecting at this time.
For a trip, I've not for now a clear idea. I've to know about the mining rules, if I need a licence to prospect, where are the gold fiels who can be interestings and allowed to prospectors, how long does it takes to get there... I'd like to rent a 4 wheel drive... I have to know about the material you use. I use a French metal detector XP Deus, I mostly prospect for the coins, but I've found nuggets with it. I don't know if it's working well for the Australian soil.
Anyway, I'm planning a trip for 2014 at least.. I want also to meet people to know about the feeling of prospecting in Australia... and I'll keep an eyes on your forum ^^

You will find LOTS of information here on the forum. Just make sure that you recognise the extreme heat of the summers here in Australia. The heat can be very, very dangerous in the real outback. I am sure you will meet lots of people here who can suggest the best places for the time of year that you intend to visit Australia.

Here on the forum you will read about the highly mineralised ground in many of the gold field areas. You might need to check that your XP Deus is capable of ignoring the heavy mineralisation. Anyway, you have lots of time to research and learn from everyone here. I wish you all of the very best 'bon chance'

G'day frognugget and welcome to the forum...

As others have said there is heaps of good information to be read on this site... Hope you enjoy the good reading and hope to hear some of your golden stories as well...