Ok now we experienced the brand new machine but what do we expect in the new one.

Now this doesn't have to serious for I gather most have read what was wanted in the original 5000 under Yarns.
http://golddetecting.forumotion.net/t79-your-new-detector-gpx-5000

What do you reckon? It may even have an orb spider evader or a search button (for gold)

Either that Jeff,or the 6000 will come out with an "Extra Fine Gold Timing" switch.

"Either that Jeff,or the 6000 will come out with an "Extra Fine Gold Timing" switch."

And a build in magnifying glass to find your target. 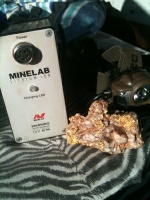 I am still to busy with the 4500, learning to get the best from it, and tuning my brain to the myriad of signal responses it gives for different targets.

Id like them to re-release the 4500 or 5000 with dust and water resistant seals on the switches and end caps, a power lead with stiff ends that does not fatigue, a longer fibre coil shaft and quality connections to the control box for the leads. Sought of a rugged milspec model. Higher quality audio would also help.

an excavator's ticket and an extendable pinpointer LOL

how a bout an intermitent high frequency bug deterrant, like what you plug in the wall socket to keep bugs, mozzies away.... thats a good idea! (but hows my spelling?)

do you have to wear a lead apron... you know, for safety? hehehe

seriously though, how about a TID that speaks to you! Example... when you pass a target it says like "1.6grams" or "8grams, 25% ironstone attached" or "dont dig, crappy lead target identified"

how cool would that be.

I dont know, i just think all detectors should be dust/waterproof so the die-hards can keep detecting in the dry windy heat of the west or the downpours of vic. Just a thought.

Bultin gps, so you can actually "build your own track" of detecting finds or trys.

It should come with a heavy duty control box cover, a nicer harness, JP's instructional DVD, and I too think it'd be a good idea if they somehow found a way to make it more water resistant, or even better, have the 6000, then the 6000S model. Comletely waterproof. So you can pay a bit extra to have it slightly heavier and completely waterproofed.

we might laugh about it all now, but ! all of the above could actually be on the drawing board already to be incorporated in the SUPER 10000 XS model !! and judging by the price increases it might cost around 10 grand as well.....but, who knows , maybe they won't throw in a set of steak knifes but a small 4 by 4 with camper trailer and a quad bike ! so if we all stop detecting and wait for that one there will be plenty left in the ground and by then the gold price will be 10 grand an ounce the way it is going and we can all afford one .....win win all round

Any new model should have these inclusions in my view
1. water resistant or water proof control box
2.water proof coils x2
3. lighter weight
4. earphones,ear muffs
5. external boosted speaker
6.lithium batteries x 2
7. a hard plastic case that fits the lot or alumium case
8. bungee cord
9. control box cover - canvas or wet suit material etc
the way electronics are advancing I am sure that the "brains" inside can be made smaller and sealed to prevent water soaking and I wouldnt think that between the 4500 and 5000 there was a major refit to enable the enhancements, For the amount of money outlayed I am sure these 9 items arent out of reach
Cheers
BB

what about the front end cap switches located where you can access them without having to lift it vertical & can view all settings at once.

byronbinalong wrote:Any new model should have these inclusions in my view
1. water resistant or water proof control box
2.water proof coils x2
3. lighter weight
4. earphones,ear muffs
5. external boosted speaker
6.lithium batteries x 2
7. a hard plastic case that fits the lot or alumium case
8. bungee cord
9. control box cover - canvas or wet suit material etc
the way electronics are advancing I am sure that the "brains" inside can be made smaller and sealed to prevent water soaking and I wouldnt think that between the 4500 and 5000 there was a major refit to enable the enhancements, For the amount of money outlayed I am sure these 9 items arent out of reach
Cheers
BB

This may be the case for someone new to the game but just the BOX is all some of us need.

What about an extra plug so we can plug in one of those cable type pin pointer probes.

one that only picks up gold would be a start,
I would not care if it weighed more and I had to car a car battery,
it would be worth its weight in gold, I am sick of lead mining, I need gold.

I'd like to see an hour meter built in. So I can see how much actual detecting I do per nugget etc. Also good if you are buying one and want to know how old it really is.

discrimination at full depth and a significant (20%) depth increase on all target sizes....?(

G'day Bedrock.Welcome to the Forum.

"Full Depth Discrimination" absolutely, now wouldnt that be something, how many areas do we know of that are so full of rubbish that they drive you nuts

yet we continue to have a go at them because we also know that there is still gold there too.

Oh yeah and a "stubby holder"

StayyerAU accurate full depth discrimination, would not be just something,but a dream come true. Imagine not having to dig 50 holes a day for trash.Can you Imagine the amount of ground coverage one would cover with minimum effort and fatigue. Actually prospectors would most likely,cover ground they normally wouldn't look twice on,because of the junk factor.

bedrock, I think that full depth discrimination is a good one, all these deep holes for steel not having to be dug. One will have to join the gym to keep fit. More gold to time detecting would be nice !!!!

StayyerAU had uit in 1, but with 1 extra suggestion.

It needs a stubby holder that chills, nothing worse than hot beer

I know areas that do produce gold still but there are dozens of little rusted fragments of tin can and wire laying about so for the most part you are scratching about digging piles of these bits and pieces before you get a piece of gold, it does not take too long before you simply cant be bothered and move on.

If you had a machine as capable as say the 4500/5000 and it could descriminate out all that crap then you would do very well I suspect, and as Kon stated there would be far less fatigue involved from all the digging and scratching about that you normally would have to do, so you would be able to cover more ground and hopefully find more gold.

And thats a good idea madmax a "stubby chiller" would be nice, its hard to concentrate on looking for gold at the end of a hot dusty day when the beer in the fridge back at camp is calling out to you

, but I would have to confess that I have been known to drink beer "Kimberley Cool"

Here is a new machine that makes some of MLs look like a T-Rex.

Adrian,I had a feeling man was one step closer to going where no man has gone before.Notice when the machine is in its contracted state, USS Enterprise,This is the captain,warp 7 Scotty.Take us out of here.

Adrian SS wrote:Here is a new machine that makes some of MLs look like a T-Rex.

Had a read of the DEUS and tell you what, it could be a very good dry beach machine.