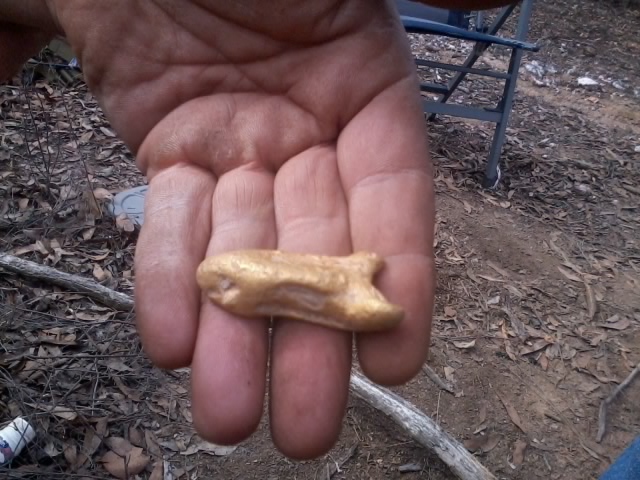 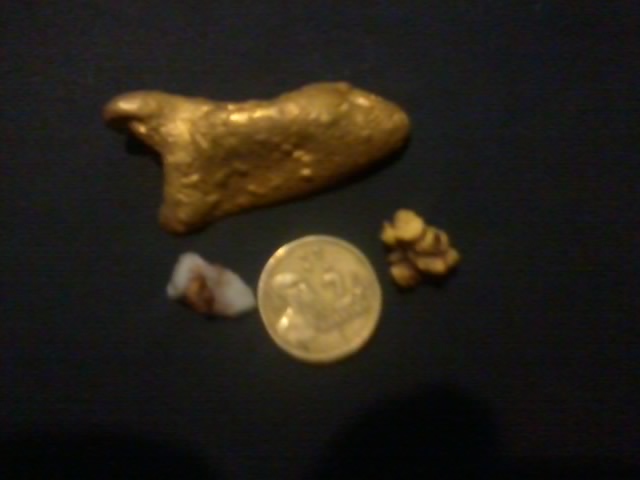 Had another great weekend with great company, what more could a bloke want, after talking to CostasDee during the week he let me know that he was able to head off for the weekend with the rest of the guys to give his 4500 another run, I wasn't sure if I could make it. Come Friday I decided to re-schedule some plans and head off Late Saturday morning. Gave Con a ring and he gave me the directions of to where they would be set up he also informed me that the Gullyhunter would be missing in action for the weekend but not to worry as the Gullyhunter and The Goldenchild had organised the spot.

Anyway arriving in camp I was met by CostasDee, The Goldenchild and Hobo's Gold, Brian was still out swinging. I was told that a few bits had been found.

Not long after I got there out we went for a swing and using the 11 inch mono on the 4500 I got a quiet but definate signal digging down to about 14 inches I was having trouble pinpointing, I was pretty sure that it was in the corner under a tree root so gave Con an SOS and over he came with his pin pointer followed by Johny. Con pinpointed the target under the tree root about 12 inches down, careful digging and out it came, a nice bit of gold, I'd never broken the 10 gram mark been close but not close enough, well this one was a nice solid 84.3 grams, you ripper I couldn't believe it, all up for the weekend I went home with 91 grams. I'll let the other guys continue on with the story. Thanks fella's for a great time. Special thanks to Glen.

Which tree was that again G.B

its such a good bit of gold G.B. nice to see cheers Terry

Lovely nugget G.B ! What a beauty! 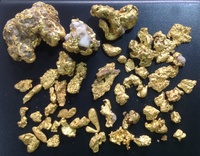 Great nugget GB.
Thanks for showing it last weekend.

I think it deserve a name like "a little rocket".

Reminds me of one.

What a little (big) ripper, GB ... congratulations!!! I bet you'll still have that smile on your face for a month!!!